Fellow cycling enthusiast Danielo got the ball rolling for an ad-hoc BICYCLE -oriented entry, and we've been accepted! Of course, for maximum impact, we hope to recruit a large number of cyclists.

Here's Danielo's vision, as accepted by the Parade Committee:

Our entry is a series of four mini-floats featuring the four seasons, starting with Spring and culminating in the main float featuring Winter. Each mini-float will be pulled by a bicycle and will feature decoration and color appropriate to the season. Operating on the common psychology of the color white reflecting cleanliness and purity, our goal is to impress that cycling, because it is environmentally and socially responsible, is the best way to have a truly WHITE Christmas. Our message is that cycling is a practical and joyful way to commute in all seasons, and that a White Christmas is best enjoyed from the saddle of a bicycle.

In addition to the seasonal mini-floats and the final Winter float, we will invite public participants to join the Winter finale of our entry on their own bikes. We will require helmets for all participants, and will restrict the number of participants as necessary to assure that we stay within the parade entry length limitations.

To make sure we don't overtake our predecessors in queue, we will incorporate some Shriner-esque twists and turns in our progress. One of our organizers has experience with this type of thing, having led similar, though much larger, groups of cyclists in parade form in California. This will engage the audience and help assure that all sides of our floats are seen by all.

We will use no recorded sound, but will instead create real-time sounds that capture the joy of cycling. Bicycle bells and other pedal-powered live sounds will make us a truly unique and exciting entry.

We have chosen to forgo corporate sponsorship, and intead are funding this project entirely out of our own pockets. We are of the opinion that a corporate sponsor would only detract from our message that cycling isn't a sport or another expenditure, but rather a practical 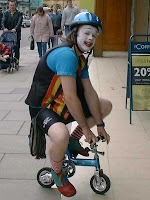 reality for everyday folks, like us. Our aim is to have our enthusiam for cycling be apparent in our parade entry.

I'm tellin' ya... Danielo has some powerful creative mojo going, plus he's an awesome ambassador for the pastime! (He prudently refrained from going off on the "car zombies" and such... a car zombie might be on the Parade Committee! Ha!) I hope his description peaks your interest, and you'll join us. I'd love to see 400 enthusiastic bike riders, 100 for each season! (Hey - think big! Tell your friends!)

If you'd like to contact Danielo directly about this project, I'm sure he'd like to hear from you. To send him an electronic message, use the word "huzzah" followed by the at sign, followed by "danielo" followed by a dot and "org." (Hopefully I've effectively deceived the web spam crawlers.)

A bit of Holiday Parade history... Back in the day, when I was first observing and later participating (usually playing trumpet in a school band), it was called the Fairyland Parade. But at some point - in the '70s, I believe - the name was changed to the Holiday Parade, in an effort to appeal to the area's sizeable non-gay community. Nowadays, it's "Don't ask, don't tell." (That's a joke! No offense to anybody intended.)
Posted by Bikeboy at 9:16 AM

Thank you for the publicity here, BikeBoy! I am excited about this project, and excited about growing it to something more and more wonderful in subsequent years. Indeed, all interested parties can contact me, with details here: