Last year I got all twitterpated when I read a story about the Greenbelt being extended on the south side of the Boise River, west of town. And I rode out that way a couple times in late summer and fall, to get a feel. Exciting stuff.

Last time I was out there, in late October or even maybe early November, they had graded a mile or so west of where the pavement ended, and hoped to lay down some asphalt before winter. (I continued on the graded section, riding as far as I could until the pathway was blocked by an official-looking fence.)

10 days or so ago, I finally mustered the time and energy to venture out that way to get a visual update. (Plus, I finally had some confidence that most of the snow would be gone, even in the shady spots.)

And - I made it all the way to Eagle Road, on the skinny tires!

The pavement extends farther, but there's still an unpaved stretch at the far west end, and there were a couple of muddy spots that made me nervous. "If I don't make it all the way through, I'll be going home with muddy shoes." But somehow I prevailed - fences that had blocked the way last fall were gone. I was thrilled to arrive on heavily-traveled Eagle Road!

Having the path extend all the way through makes it a viable transportation corridor, as well as being a scenic recreational trail.

I hope they can muster what is needed to pave the remaining distance. As it currently stands, I can't confidently recommend it for any but the "adventurous" type. It's definitely not suitable for a lightweight road bike. Once it gets dry, I imagine that most people with reasonable skills on a fat-tire bike would do just fine. (Of course, at the other end you're dealing with Eagle Road, and that ain't gonna change. Traffic is heavy and fast.)

I believe the dream is to continue even farther out by 2 or 3 miles, to Eagle Island State Park. To make it attractive to most cyclists, they'll probably have to figure out how to get bike traffic under Eagle Road. I didn't check out the bridge, to see if there's room for a path underneath.)

Once I got to Eagle Road, I "paid my dues," riding south on roaring Eagle to Pine, then eastward back home. Ended up with a 25-mile commute for the day.

(This photo is how the pathway looks, where it emerges onto Eagle Road.  It's still pretty drab and wintery-looking out that way; I expect photos will be forthcoming in another month or two.) 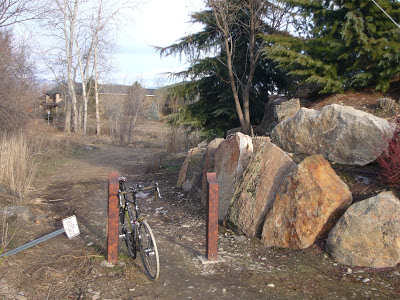 In Portland, residents are rallying to save a 120-foot sequoia tree that the city wants to cut down, to build a bike/pedestrian path.

I love trees, and so my first reaction (being admittedly totally unfamiliar with the logistics of this project) is, "Why can't they just build the path so it jogs around the tree?" From the story: The city said it looked at several alternatives. In the end, however, city officials felt that removing this one tree was the best option.

Sorry, it's hard to imagine a scenario where they can't just make the path jog a few feet. I'd gladly slow down, to ride around a magnificent sequoia tree!

And in Washington (the state), there's an outcry about a Legislative proposal to charge a $25 fee on bike purchases, as part of a $10 billion transportation revenue package.

The fee would apply to any bicycle sold for over $500. That's kinda weird, huh? Do expensive bikes cause more wear-and-tear on the infrastructure than cheaper bikes? And, would it apply to used bikes, or just new bikes? (Will there be a "bike show loophole"?)

Frankly, I don't think most transportation cyclists would begrudge paying a reasonable fee to help with maintenance and construction of bicycle infrastructure. But it sounds like the WA proposal just puts all the money into a big pot for everything from bike paths to freeways. (And cyclists can make a very valid argument that since a good percentage of the cost of maintaining roads derives from property tax, we're already paying more than our fair share. Especially if you consider the wear-and-tear, or lack thereof, we inflict on the roads.) Sounds to me like just one more example of runaway government, trying to squeeze blood out of a turnip.
Posted by Bikeboy at 2:12 PM 2 comments:

During the time of year that's favorable for bicycling (often late March through early November in these parts), I usually go on an exercise/pleasure ride in the afternoon.  (Surrendering my "lunch hour.")  This time of year, I typically work straight on through, and then take a longer, more scenic route home.

Also this time of year, traffic noise is compounded by the additional noise from studded snow tires.  Those things are noisy, rattling and clattering down the road!  Thank goodness most of 'em are off by April.  It's a blessing to get away from heavy traffic.

One more observation... after a summer of hot temperatures, a mid-40s day seems frigid.  But after a winter of cold temperatures, mid-40s seems like shirt sleeves and shorts weather!
Posted by Bikeboy at 7:40 AM No comments:

Boomers not as healthy as their parents

People are living longer now than they did a generation or two ago... but they aren't as healthy.  That shouldn't come as a surprise. Fast food and push-button life-of-leisure aren't particularly good for you.

A study conducted by researchers at medical schools in West Virginia and South Carolina has some interesting findings.

They surveyed "baby boomers" (ages 46-64) recently, and compared the results with people who were in that same age group and took the survey 20 years ago.

13.2% of "boomers" rate their own health as excellent, compared with 32% in the older group.

65% of boomers say they don't exercise regularly, and 52.2% said they have "no regular physical activity." (Compared with 17.4% of the older group.)

On the bright side... there are fewer smokers among boomers, and thus both emphysema and heart disease are down.

The conclusion: “Despite their longer life expectancy over previous generations, US baby boomers have higher rates of chronic disease, more disability, and lower self-rated health than members of the previous generation at the same age.” 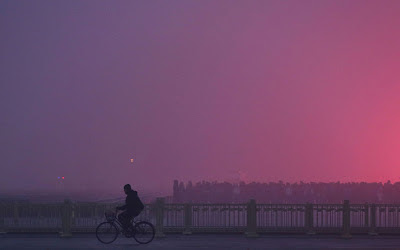 Of course, it's a fairly recent phenomenon in China.  40 years ago, they were largely an agricultural society with very limited world trade.  People got around on foot, or on their beloved bicycles, or by public transit.  Now they are the producer of everything from cheap Walmart junk, to almost every shoe sold, to the world's bicycle fleet, to the screen you are most likely looking at, at this very moment.  All that production requires power, and power means dynamos spinning, often by means of coal.  All that production has also brought prosperity, which they use to hang up the bicycle and buy a car.
Posted by Bikeboy at 8:00 AM No comments: