I'm cautiously optimistic about an accessory I just invested in.  It's called the BikeHand - a wall-mount bike work clamp.  59 bucks on the Amazon.com.

Yeah, it would be nice to have one of those super-sweet Park stands... but at $150 up, they're a bit rich for my blood.  And - I'd never use one frequently enough to justify the expense.  The BikeHand seems like it will be an acceptable substitute for the shade-tree mechanic.

It was designed to mount on the wall, but I had other plans.  I attached it to an 8-by-10-inch piece of scrap plywood with two 5/16 x 1.5 inch bolts, and clamp it into my Jawhorse (another nice piece of equipment, by the way).  When it's not in use, it and the board don't take up nearly as much space as a floor-standing model.

I used it yesterday while fine-adjusting my rear derailleur, and while I was at it I put some new brake pads on the front. 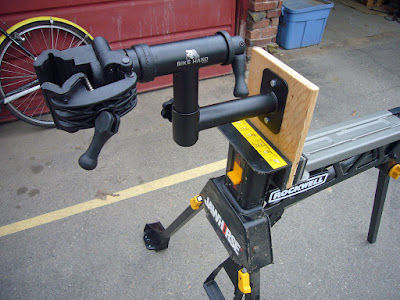 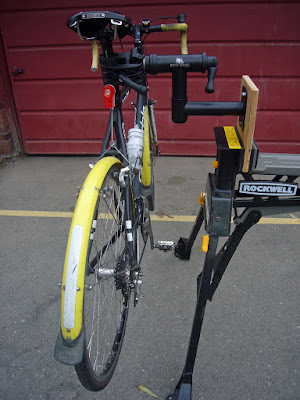 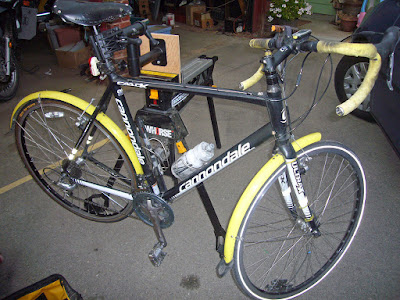 Posted by Bikeboy at 8:58 AM No comments:

Another Tour de Fat in the books

My two local granddaughters, Mackenzie and Bonnie, joined me once again to ride in the Tour de Fat Parade on Saturday, August 15th.  We crossed paths with friends, and a good time seemed to be had by all.  (How not?  A lovely day - a delightful activity - and boisterous but not TOO crazy participants.  The "official estimate" put the rider count at about 11,000 this year.  Fantastic!  That's a LOT of bikes and bike riders!  If I'm not mistaken, people are still leaving the staging area as the first-out riders are getting back, making it a full circle.)

Besides the fun, the event raised right around $450,000 (!!) for the local bike-oriented nonprofits.  Way to go everybody - especially the army of dedicated volunteers who work behind the scenes to make it happen.  (Yeah, not everybody just magically shows up on Saturday morning, nor does the event magically transpire.)

CLARIFICATION: The $450K figure (which I got off the Boise Bicycle Project website) is the grand total for all the Boise Tours over the years... approximately $45K was raised this time around.  (Thanks, Clancy, for your diligence in keeping things straight.) 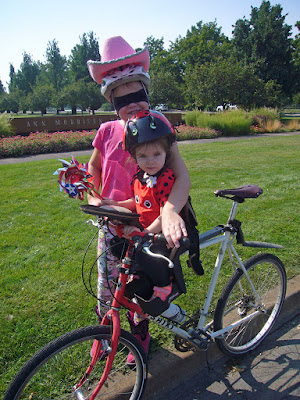 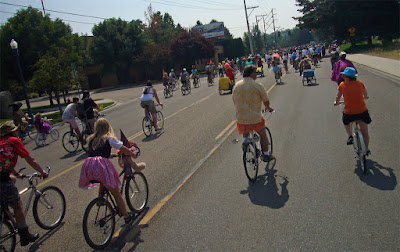 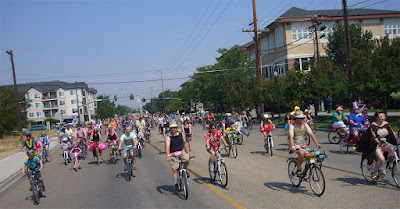 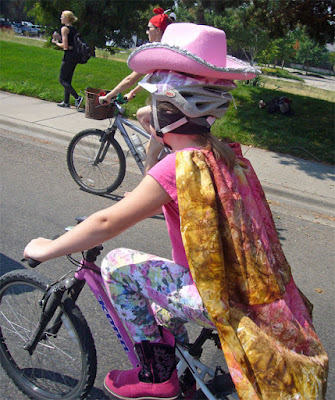 We are deep into chip-seal season again, here in Ada County.  And it's official - they've put gravel down on every road that I ride.  (Well, not really, but it sure seems like it.)

The chip-seal is a surface coating for area roads, that's more economical than other options.  First they prep the road by sealing cracks, etc., and sweeping it.  Then they lay down a thick coating of sticky, gooey stuff, and drop gravel on it.  Then they turn traffic loose on it for a week or two.  The gooey stuff hardens with the gravel - "chips" - glued into place.  It's kinda like peanut brittle for pavement.  Once it's set up, they sweep off the excess gravel, and put another surface coating of the gooey stuff on.  Generally, that keeps the road in pretty good shape for seven years or so, when they repeat the process.

Obviously, us skinny-tire cyclists would prefer glass-smooth asphalt.  But us taxpayers appreciate the notion of going the least-expensive route.  And once the process is completed, the finished product is tolerable.  In fact, it's pretty good on the roads that are designated as "bike routes," because they use small-caliper 1/4" gravel, which makes for a smooth surface.

I may have discovered an experimental treatment.  In between the gravel and the final coating, lay down a squirrel here and there, for an even smoother final product!  (Noticed and snapped right at the end of my street.)  But based on early wear, I don't think the squirrel will prove to be durable. 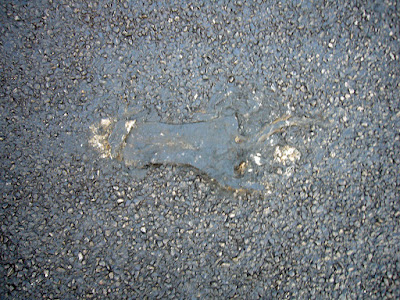 A study of bicycling fatalities from 1975-2012 illustrates some non-surprising trends.

The decline in child fatalities might be "attributable to fewer child bicycle trips." Do you s'pose? When I was a kid (too early to be included in this study), there were probably 150 bikes parked out front of Roosevelt Elementary. Nowadays there are maybe a dozen bikes out front of Monroe Elementary, where my kids attended and my granddaughter now attends. (She can't ride her bike - her grandma is absolutely certain she'd be either run over or abducted somewhere along the 3/4 mile ride.)

Fatalities varied from state to state, with Florida having the most (I assume by percentage), and Vermont the least. Overall, the fatality rate dropped from 955 in '75 to 717 in '12.

What else has changed in the past 40 years? As a casual observer, I'd say a primary change is... there were zero cellphone/"smart"phone users in '75, and nowadays pretty much everybody has one, and many are yammerin' or pokin' as they drive along. And obviously if they kill a few bike riders, society considers that acceptable "collateral damage."

The study suggests better bike infrastructure, enforcement, helmet use, and better education on safe bike/motorist behaviors as keys to reduce fatality rates. I agree, particularly on the enforcement and education.

Story HERE.
Posted by Bikeboy at 8:35 AM No comments: