We're not even through April yet, and already two young riders have been gravely injured (one fatally) in motor-vehicle / bicycle accidents.

A little five-year-old boy was riding with his five-year-old sister on Fairview Avenue (!), when he was struck by a giant cement truck.  Preliminary reports lead me to believe the little fellow was in the wrong place at the wrong time, and went into the side of the big truck.  At last report, he was still in the hospital with serious injuries.

And then on Easter Sunday, 13-year-old Olivia Schnacker was crossing Ustick Road while riding with friends, when she was struck by a car.  It was at the intersection of Jullion Street - there is a crosswalk with flashing lights there, and witnesses seem to believe the lights were activated.

According to a STORY on the KTVB website, the setting sun may have been a factor. I'm sorry - the incident took place "just before 6:30 pm," and the sun set at 8:34pm on April 20. I'm not buyin' that lame excuse! And then the lady gets out of her car, and hysterically cried out, "I'm going to go to jail!"  I should probably feel sympathy for her, but I'm having a hard time summoning it.  I feel bad for poor Olivia, whose life was cut tragically short, and for her family and loved ones.

I wrote a guest opinion over on the BOISE GUARDIAN, urging bicyclists and motorcyclists to be careful! And motorists too! Cyclists do stupid stuff all the time, but usually they're only endangering themselves. I want EVERY motorist to consider how he or she would feel, if he were getting out of his car to survey the damage he just inflicted on a child during a moment of inattentiveness... and drive so that NEVER happens!
Posted by Bikeboy at 8:46 PM 2 comments:

Bike/ped infrastructure of the future

It's been awhile since I posted anything.  I hope you are well; I've been busy with lots of things... and at the same time the cycling has been fairly steady.  As the weather is getting nicer, the two-wheeled population is increasing meaningfully; 10 days or so ago, on one of the nice early-spring days, I was riding to the office and saw five cyclists in the bike lane up ahead!  Exciting.  (And also exasperating - the Greenbelt and other popular bike paths get complicated as "amateur hour" begins for another season.)

There is an ongoing discussion about an effort to make downtown Boise more "bike friendly," with additional striped bike lanes, etc.  I commented about it just last month.  (As a "vehicular cyclist," I don't feel a personal/selfish need for improved infrastructure.  But when I put on my "bicycle advocate" hat, I acknowledge that if they build facilities for the casual/timid cyclist, it's likely those cyclists will increase their cycling... perhaps even to the point that they're less casual/timid and will expand their bicycle horizons.)

There's always need for bicycle advocacy... because there are always plenty of non-cyclists who advocate against more bike infrastructure.  They lack the vision, and lack confidence that investments in bike/pedestrian facilities will make the community a better place for everybody.  They only see precious car/truck facilities - part of our culture! - being taken away.

Maybe I lack vision... and occasionally it's good to take a look at "what might be."

In that vein... recently my friend Bob T. emailed me a link about a totally unique bike/pedestrian roundabout in the city of Eindhoven, Netherlands.  It blew my mind!  It's extremely functional, and is also a fantastic melding of art and science.  It's called the "Hovenring."  You've got to see this thing.

"The bridge comprises a 70-metre high pylon, 24 steel cables and a circular bridge deck and is made out of steel. The cables are attached to the inner side of the bridge deck."  So, it's a roundabout with ramps at the corners, that hovers above the motor vehicle intersection. 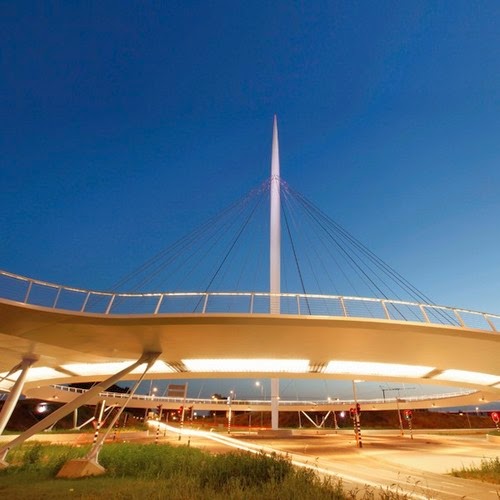 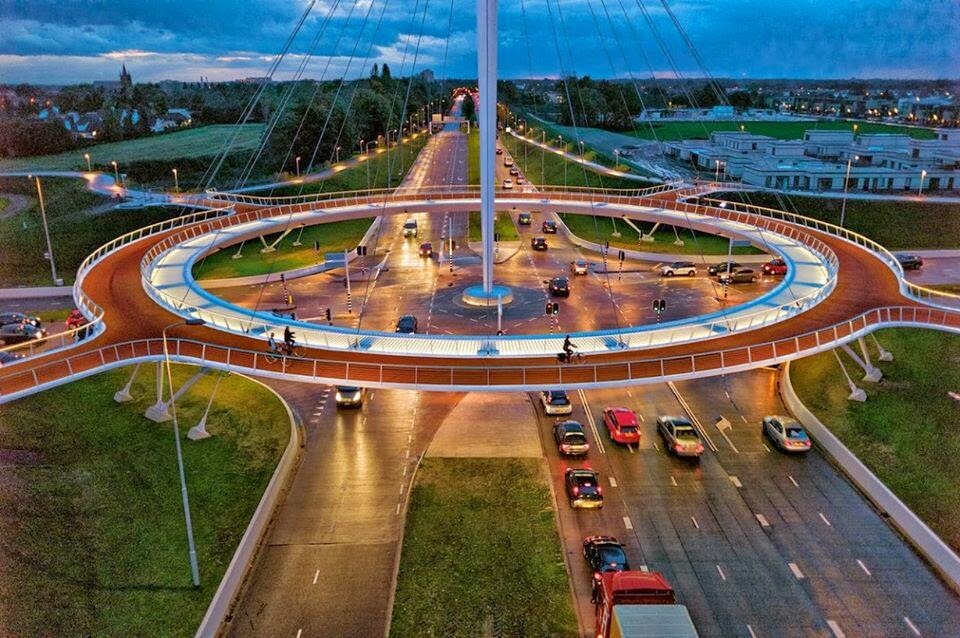 You'd be hard-pressed to find somebody in the Netherlands who pooh-poohs the idea of bicycles being a significant component of their transportation culture. Maybe if they can put up a Hovenring, it's not preposterous for us to stripe down a few more bike lanes.

More info about the Hovenring can be found HERE. And the video Bob sent me can be seen HERE.
Posted by Bikeboy at 10:01 PM No comments: