ALERT!  I have to confess considerable skepticism, and cynicism, regarding the efforts of Humankind to proactively change the climate for the better.  If that attitude offends you, you might want to skip this one.

What a relief!  We (and I speak, of course, of all of humanity) kept the wheels from coming off long enough for our luminaries to gather at the Paris Climate Summit, where they'll get the whole thing figured out!

Yup... the Big Brains are convened.  147 world leaders arrived in private jets (at least one in a Boeing 747!), or at least First Class.  They'll talk.  They'll wine and dine.  They'll break for photo-ops.  (I've gotta think there will be a lot of "nudge-nudge, wink-wink" going on, as well.)

Apparently the objective is for the rich countries to fund efforts by developing nations to cut down on carbon emissions, and reduce greenhouse gases.

NBC News reported that our Emitter-in-Chief, who quite possibly has the largest "carbon footprint" on Planet Earth, had 3 minutes allocated at the big opening reception, and took 14 minutes.  He seems to be wavering between climate change and gun control as his number-one priority for his last year in office.  Or that's what he tells people.  Between you and me, I bet his number one priority will be taking lots of vacations, golf outings, etc., in Air Force One, while he still has that privilege.  Let's watch and see if I'm right.  (I wish I could have more respect for the man... but apparently he's never learned a lesson that I learned quite young... your actions speak so much louder than your words!  Even if you blather on for 14 minutes.)

(Yeah, I'm just a racist, like anybody who questions Dear Leader.)

What CAN we do, to minimize our impact on the climate?  I believe it starts with individuals.
- We can minimize our driving.  I believe there's a consensus that driving around in our vehicles (or jetting in our 747s) is probably the single most polluting activity that most of us engage in.
- We can try not to waste things.  Eat all our food, use up our goods, so more doesn't have to be manufactured on account of us.
- We can turn the thermostat down a few degrees in winter, and up a few degrees in the summer.  Expand our "comfort zones."  (Possibly President Obama's first act in office was to turn up the thermostat in the White House.  Check it out - it's out there on the record.)
- We can turn off our lights, electronic gizmos, etc., when they're not in use.
- We can walk up one flight of stairs, and down two.  (Jimmy Carter suggested that, during the first big "fuel crisis," way back in the early '70s.  I thought it was a good idea then... and I still do.  We're WAY too lazy!)

Billions of people, doing billions of little things, will have a much bigger difference than the Blowhards of the World, gathering to talk some more.

Autumn - the best time for bicycling in Boise? (!!)

We are fortunate to have weather that's suitable for bicycling - even for casual cyclists - probably 9 months of the year.  But every year, I'm reminded of how lovely it is to ride a bike in autumn in Boise!  The days are generally still warm and sunny... the trees do their magical transformation... and I s'pose the lighter traffic also contributes.  (What's with the people who put their bikes away for the year, on Labor Day?!)

This year was particularly amazing - we didn't have frost until November!  And so the perfect conditions have persisted a few weeks longer than normal.

Today I went on a bike ride with granddaughter Bonnie.  Lovely scenery... plus encounters with lots of squirrels, geese and ducks... giraffes (! - looking over the fence at the zoo)... and Bambis grazing at the park.  A fine time was had by all.

She'll have outgrown the baby seat by next season... better bust out the tag-a-long, I guess... 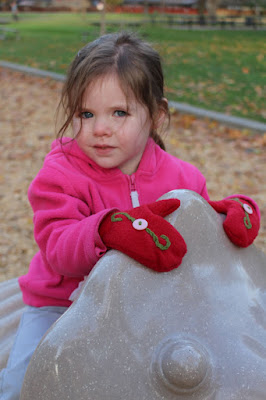 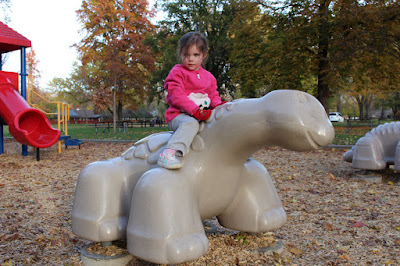 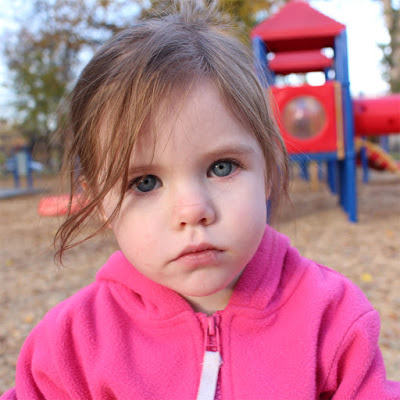 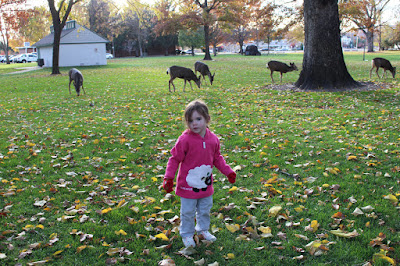 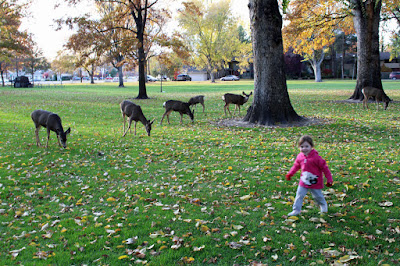 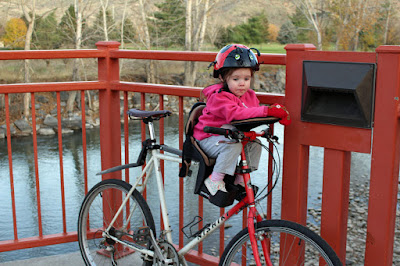 Posted by Bikeboy at 7:15 PM No comments: