So, let's suppose you're a medical professional who has been in Africa on a humanitarian mission, trying to provide care for people suffering from an often-deadly virus infection.  And then you come home, and find yourself surrounded by people who are worried that you might have the virus... and might in turn give it to them.  Because of that fear - a very reasonable fear - you are quarantined for the duration of the virus incubation period.

What would you do?

I think I'd go on a bike ride.

And that's what Kaci Hickox did.

She's the nurse who just returned from Africa.  Because it can take up to 21 days to get sick after contracting the virus, she was ordered to stay in her house for 21 days.  (The evidence also suggests that the only way to contract the virus is through VERY close contact with the victim, in which body fluids are exchanged/contaminated.)

Hickox defied the order and went on a bike ride with her boyfriend.  (She lives in Fort Kent, Maine, on the Canadian border.)  “I am not going to sit around and be bullied by politicians and forced to stay in my home when I am not a risk to the American public," she declared.  As they rode, a couple cop cars followed, and the "press corps" followed behind the cops.  Apparently it was uneventful - she didn't spew body fluids on any of her fellow citizens, who breathed a huge sigh of relief when she went back inside.

I can't blame people for being wary.  Ebola is about the worst thing that could happen to you!  But a bike ride should be on the approved list of pastimes, during the quarantine period, as long as the cyclist avoids places where there are lots of people.  (A "critical mass" ride might be an event to avoid.)  I'd rather have 'em riding bikes than riding around in the subway, like that NYC doctor who started showing symptoms the next day.

If I was waiting 21 days to find out if I was going to die of a dreaded virus, I'd rather go on a bike ride than sit at home watching "The Stand."  (I have it in my DVD collection and have been thinking about watching it again.  If you're not familiar, it's a miniseries based on the Stephen King novel.  A germ warfare virus escapes the research facility and ends up killing 90% of the population.  The survivors band together - the good guys in Boulder, Colorado, and the bad guys in... are you ready?... Las Vegas!)  It's pretty good.  But maybe you don't want to watch it - or read the novel - during the Ebola Scare, or when you're nursing a case of the flu.

How about requiring her to wear a hi-viz yellow sweatshirt with bright pink lettering: "EBOLA QUARANTINE - DON'T RUN INTO ME!"?  I'd buy one of those!
(-;
Posted by Bikeboy at 11:05 AM No comments:

Mark Hoglund is a doctoral student at SUNY, and has prepared an online survey about bicycling and safety.  I submitted my answers... it took about 10 minutes.  I'd encourage you to, as well, if you are at least 18 years old.  As with any survey, the more participants, the more accurate the survey can be.

"We hope to learn about things that bicyclists do which may help them avoid traffic accidents.  There will be questions about .....

- your normal practices while bicycle riding
- traffic accidents or near accidents which you may have had while bicycling
- other factors (such as the amount of riding you do) which might affect your risk of having an accident."
Most of the survey questions seemed pretty reasonable.  There were a couple about behavior at stop signs and stop lights; I added a note explaining that I reside in Idaho, where cyclists aren't required by law to stop at signs.
You can link to it HERE.
Posted by Bikeboy at 9:26 PM No comments:

In 1978, this offbeat new sitcom came into existence - Mork and Mindy.  I was young and poor, and much of my entertainment was listening to my records and watching TV, so I tuned in.  It was a winner... I watched it regularly.  I thought Mindy was cute as a bug (that's very cute... right?), but it was the zany antics of newcomer Robin Williams that kept it truly interesting.  (According to the Wikipedia, Williams came in to audition with the producer of the show... he was directed to a seat, and stood on his head in the seat, and was hired on the spot.)

Over the next 30 years, Robin Williams became a household name and part of our culture.  He made a wide variety of movies, playing everything from "manic Robin Williams" to straight men to sinister scary dudes.  And of course, whenever he got the chance to cut loose, there was no one better at frenetic high-energy improvisational comedy.  He sure caused me to laugh - and groan - a lot, over the years.

Off-camera, one of his passions was bicycling!  Did you know that?  It wasn't well-publicized, but he loved to ride bicycles, would hang out with Lance and visit France during the race of the same name, etc. 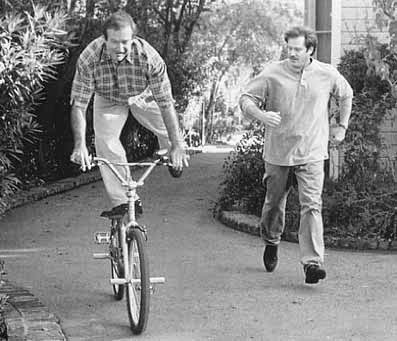 When he took his own life earlier this year, it shocked even his best friends.

How could a guy who made us so happy, be so sad?

So, why do I bring this up in a blog about cycling?  Well, I already mentioned his love of bikes.  But also... there's a saying among motorcyclists, "You never see a motorcycle parked in front of a psychiatrist's office."  Suggesting that motorcycling is therapeutic and brings peace of mind.

I certainly believe that to be true... unless maybe you're a white-knuckle edge-of-control motorcycle rider, and maybe even they get to release some stress.  (I don't think it would work for me.)

I believe bicycling is even more therapeutic!  Or at least I know it works that way for me.

Maybe Robin had let dust collect on his bicycles for too long.  Evidently he was very, very disappointed about how the Lance Armstrong soap opera turned out.  I s'pose I can understand.

Depression - chronic depression - is a serious condition, and obviously hard to understand if you don't suffer from it.  I had a younger sister who was a brilliant over-achiever.  As we were growing up, I know it was hard for my parents to not say, "Why can't you be more like your sister?!!"  She graduated from medical school at the top of her class, and very young.  Two or three years later, after several unsuccessful attempts, she committed suicide.  That's the last time I cried like a baby.  I couldn't understand how such a gentle, gifted person, beloved by everybody in her circle, could feel so bad about herself and her situation.  I still don't.  I still miss her many years later, and I'll miss Robin Williams, too.

(I happened across an interesting article about Robin Williams and his love of bicycling... HERE.)
Posted by Bikeboy at 2:21 PM No comments:

A couple developments in Boise could result in more bicycles on the road in the not-too-distant future.

A stretch of Capitol Boulevard is set to get upgraded bike lanes within the next few weeks, in conjunction with a resurfacing project.

For those not familiar, the street is prominent in downtown Boise, running between the Boise Depot on the south and the Statehouse on the north.  It is bordered by Boise State University and Julia Davis Park on one side, and Ann Morrison Park is nearby on the other side.

Some "intrigue" has been added to the project, because the City of Boise and ACHD (the roadway government entity in the county) have had a political "pissing match" (pardon my French!) about the details.  In the latest round, the city has wanted the traffic lanes to be 10 feet wide, while ACHD has insisted on 11-foot lanes.  Rational people would say, "Let's compromise and make them, uh... um... ten-and-a-half feet wide."  But that would be way too simple for our elected public servants and their paid experts.  ACHD will likely prevail, since they own the tape measures and painting trucks.  According to the latest update on the Statesman website, there will be a  "bike lane ranging between 4 and 6 feet wide running along the east side of Capitol. A painted buffer between 18 and 42 inches wide will separate the bike lane from car traffic."

How wide does a traffic lane have to be?  Based on my experience... the wider the better!  Some of those guys in their F350 Super Duty Turbo Dually pickups can occupy the full lane and seem to get flustered because they can't occupy ALL the lanes!

And in another "big city" development, the Boise Bike Share has become something you can actually touch!

The administrators were hoping to have it up and functioning in 2014.  But unfortunately, '14 is flying by, and now it looks like 2015 might be realistic.  However, they have a sample bike (!), and the Boise Weekly people took a ride on it.  Story HERE.

There's a photo of the bike.  It's bright green and has a "utility bike" look about it.  It appears to have an electronic bike share device on a rear rack, and also appears to have a drive shaft instead of a chain.  I suspect that's intended to lower the maintenance requirements... ?  A shaft is considerably less efficient than a chain for transmitting power to the back wheel... but on a bike that will be primarily used for low-speed travel over relatively flat and smooth surfaces, that probably won't be a major issue.

The story says they will be introducing the "principal sponsor" very soon.  I'm looking forward to that; my main reservation with the program has been the implication that it will be another taxpayer-funded perk that our kids' grandkids are expected to pay for someday.

Also, the story lists the "stations" where the bikes will primarily be parked:

They're all fairly close-in... maybe if the program is a winner, they'll expand it to more destinations.  (And if I understand correctly, a GPS locator device on each bike will enable the user to leave it at a destination other than one of the "stations."  I'm waiting to see how that works; obviously it will require a staffer who can retrieve the bike at some point and return it to a station.  In my mind's eye, it seems a little haphazard and chaotic, but maybe the reality will be poetry in motion.)
Posted by Bikeboy at 7:59 AM No comments: