Remember Greg?  He was the first-ever American to win the Tour de France... several years before whats-his-name... the disgraced guy.  LeMond won three times in his career.  I stood in line on a gray winter morning to get an audience with him.  I got a photo and we chatted.  I told him I'd ridden 50,000 miles.  (Cumulative, since I started tracking in 1986.)  His jaw dropped... he interpreted that to mean I'd ridden 50k miles in a year!  I clarified.  He laughed, and gave me a signed poster - one of his moments of glory on the Champs-Élysées, with the Arc de Triomphe in the background.  He wrote on it, "To Steve, keep it up another 50,000! -Greg LeMond."  It's a prized possession, framed along with our photo together.

As it turns out, I did keep it up another 50,000.  On September 1, 2004, I rode my bicycle to the Statehouse and lofted it high above my head, in a lame imitation of Rocky!  Because that was the day I hit 100,000 miles.  My office friends were there to celebrate with me. 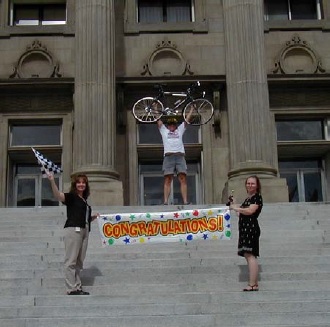 In 2004, another 100,000 miles seemed insurmountable.  Like climbing to a high peak, and seeing for the first time, the distant, even-higher mountain range.  Shades of Lewis & Clark!

Well... time marches on, and the miles keep rolling underneath me.

Yesterday, I hit 190,000 miles.  Now that tall range is much nearer to the view.  I should hit that peak sometime in 2022, based on current annual mileages.

(For post-2020 readers, if there be any: As of April, 2020, the entire planet is under quarantine, in an effort to prevent spread of the Covid-19 virus. It is the first plague of the 21st Century... if you don't count terrorism or climate change, I s'pose. We are all advised to wash our hands frequently and try to maintain a distance of at least 6 feet from other people. PERFECT for bike riding... at least the distance part. (There's another recommendation that's plain DUMB... try to keep your group gatherings of less than 10. Futility! If each of those 10 people is a carrier walking away from that gathering, and meets with 9 other people, who in turn each meet with 9 other people... 1000 people infected in 3 "generations"!!) But I digress.)

Some people see cycling as a social activity. You see groups cycling together. To bring even more sense of togetherness, sometimes these groups ride together in matching costumes! (I wish they'd stay off multi-use paths, when they're riding together FAST in their costumes! They really belong on the street.) I've always been more of a "lone wolf" cyclist. Other than my grandkids, who I ride with from age 1 (when their momma will let them go) until they "age out" at 10 or 11 (WAY too cool to do something lame like bike-ride)... I go maybe 3 times a year, average, with other people. I generally enjoy my rides with others, but that means ORGANIZING... when solo, I can just go!

Today, I rode about 2 miles with granddaughter Bonnie at the park. (She's 7, and getting comfortable with starting and stopping. She's ready for expanded horizons.) Then I rode downstream on the Greenbelt, to the bridge a couple miles down from Glenwood. Except for a couple pockets of humanity (people who don't understand, and/or don't care, about airborne disease transmission), it was pretty darn easy to maintain that social distance. 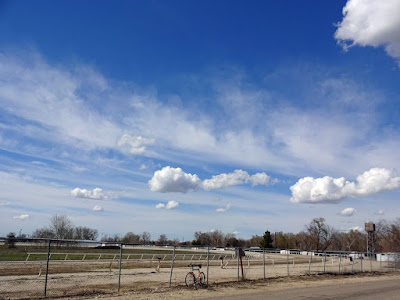 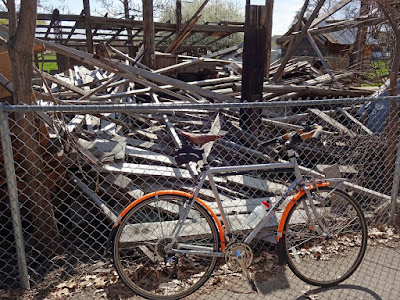 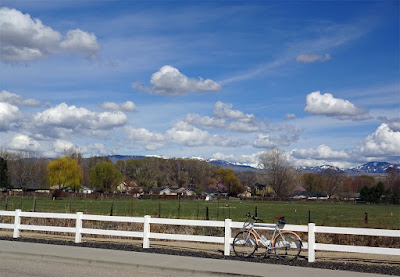 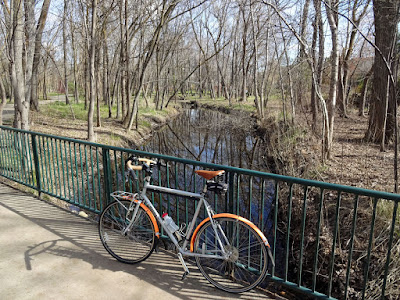 Posted by Bikeboy at 8:47 PM No comments:

I just got my April Rolling Stone Magazine. It has St. Greta on the cover, and it's all about the Race To Save The Planet - NOW OR NEVER!

In the magazine publishing world, there are deadlines to go to the printer and such. And the April edition was obviously sent to the press before the "Corona Crisis," because there's not a word about it. Instead, it's chock-full of propaganda and society-shaming about "climate change." There's an interview with Alexandria Ocasio-Cortez, a luminary of the "save the planet" movement, and co-author of "The Green New Deal." There's a scathing expose about Chase Bank, which is apparently financing Global Warming. There are photos of dead whales, forest fires, buckled streets... all just small snapshots of the disasters that await us if we don't do something now!

Here's a tidbit - a Call to Arms to RS readers, to "protest":
Earth Day Climate Strike
"For the 50th anniversary of Earth Day, activist coalition Strike With Us is calling for workers and students to stage walkouts across the U.S., demanding action before it's too late."

But, maybe it will give people more time for getting educated and thoughtful consideration about other matters, like Earth Day and climate change.

I'm not sure what the Rolling Stone demographic is, but it's obviously aimed at people who will easily become alarmed, and perhaps manipulated. People who will see a photo of a dead whale, and decide they can "walk out" for a day to change the climate... and then go back to business as usual.  (Which is pretty much the modus operandi of the Climate Change hand-wringers and pearl-clutchers.)

Why is Earth Day on April 22? That date is Nikolai Lenin's birthday. It's also "the day of Bernadette Devlin's maiden speech before the House of Commons." I have to confess, if I ever knew about Bernadette Devlin, that knowledge has been forgotten. But Lenin's name still rings familiar. No wonder Alexandra is all about Earth Day! (And it suggests that Earth Day is as much about political philosophy, as it is about the environment.)

I actually feel some pity for young Greta, from Sweden. Here's a teenager, who, like lots of teenagers is concerned about the environment. (And, I admire her, because unlike MOST luminaries of the "environmental movement," she actually seems to walk the talk. Evidently after her 15 minutes of fame at the United Nations, she was concerned enough that she didn't want to fly home to Sweden, and instead took passage on a boat. How often does Al Gore, or John Kerry, or Leonardo DiCaprio, or Jane Fonda, refuse to take the plane?) But, poor Greta is being USED by the Climate Zealots.

Here's what really chaps me... they are all talk, no action! They are "demanding action before it's too late." What are THEY doing, besides laying down their demands? How does the quote "carbon footprint" unquote of Algore or Alexandria compare with that of Joe Lunchbox?

Please don't misunderstand. I would like to sincerely thank my fellow Earth Citizens who are trying to live a low-impact lifestyle. I don't know how much impact you, or any of us, are having on the climate... but regardless, it's good to make an effort to leave our home at least as nice as we found it. I'm confident that the climate is changing, because it has been changing for the entire history of the planet. I have NO IDEA how much our modern lifestyles are impacting the planet, but I know there are a BUNCH of factors that are probably having much more impact, that we have absolutely no control over! (I'm far more confident in our ability to harness the Covid-19 virus, than our ability to control the climate!!! And I'm not willing to go back to a caveman lifestyle, because it MIGHT cool the planet by 1 degree.)

As for "now or never," for 50 years we've been told that if we don't do something RIGHT NOW, in 10 years it will be too late! SHUT UP!

(I'm trying to do my part! If you want to compare "carbon footprints," get in touch with me and let's talk!)
Posted by Bikeboy at 9:56 AM No comments: