What a relief! We've survived another trip around the sun, and Earth Day (April 22) is once again upon us.

Last year I posted some info from the Wikipedia on the origins of Earth Day. A Wiki contributor observed (humorously, I thought) that it coincided with Eddie "Green Acres" Albert's birthday.

Since then, I've dredged up a relic from the past, that shines an interesting light.

I have in my possession "Volume 2" of Earth Times, published in the spring of 1970.

In 1970, I was an idealistic high school lad, concerned about the precarious environmental situation, and I bought it off the rack at Albertson's.

You don't remember Earth Times? It was published by Straight Arrow, the folks who also published Rolling Stone, which I used to read regularly. (Back before they went "Hollywood;" I haven't picked one up in years.) It was in the same tabloid format, and on the same newsprint. I doubt it lasted more than a few issues.

(It's just by chance I still have it - I gave all my old "Rolling Stones" to the public library a few years back.)

My Earth Times is all about the (then-upcoming) first Earth Day, which was April 22, 1970. I'd like to share some of it with you... stuff I found fascinating.

Excerpts from the magazine are in light green, below...

[Page 9] April 22nd is Nikolai Lenin’s birthday, the day of Bernadette Devlin’s maiden speech before the House of Commons and the time of the fourth full moon of 1970. It is also Earth Day, the date a bunch of environmental activists have set aside for a nationwide teach-in about the accelerating deterioration of our planet.

Don't you love "teach-in"? How nostalgic! It was all about being counterculture and groovy back then! (Very "Austin Powers"!! It seems a little silly and juvenile in retrospect.)

Also interesting to note that the selected day officially coincided with Lenin's birthday! And that's not John Lenin, my friends! Maybe the John Birch -types were right... maybe "environmentalism" is a Communist Plot!
(-;

And how about ol' Steve Cotton? Rather than blaming the Commies, it sounds like he's blaming "the system" for everything that's wrong! Yeah! It's the military-industrial complex that's harshin' my buzz! Fight The Man!

Issue 2 also had an interview that's rather enlightening.

At the time, Watt was "professor of Zoology at UC Davis. Research and systems analyst at Davis. Adviser to the Prime Minister of Canada, and CA Commission on Environmental Quality."

The interview begins on Page 18. Here are some excerpts.

SM: You look really spiffy tonight. If I had known, I would have dressed for the occasion myself.
KW: I was out talking to the Kiwanis.
SM: How was it?
KW: Very square. Listen, the reason I look like this is that I decided that sounding like Che Guevara was bad enough; I don’t have to go around looking like him.
SM: The other day, I inadvertently called a woman a rabbit for having eight kids. She really got mad at me and all of a sudden I had visions of Roman Catholic vigilantes coming down and setting fire to my lawn.
KW: But you told the truth. She is a rabbit.

SM: How did you come to your present notoriety?
KW: Last July or August, Senator Nicholas Petris tried to push legislation through the California legislature to ban the internal combustion engine from California by 1975. He got it part way through, but didn’t succeed. I was just outraged, so I decided that I would write a letter to all the California newspapers … [instead] I had the University put out a press release to the effect that the legislature had made a very bad move. … I became well known for that press release. Amazingly, it’s probably all going to turn out to be true and everybody has forgotten about it.
SM: What did the release say?
KW: I pointed out that … there might in fact be mass smog deaths in Long Beach by 1975 if nothing is done about air pollution. … The funny thing is – since that media fluke, I’ve won a gold medal and an honorary Ll.D. and there’s been no news about that.

SM: Where are we with respect to energy?
KW: N. King Hubard of the U.S. Geological Survey says that we have between 13 and 50 billion recoverable barrels of crude oil left in the world. This was being used up at the rate of eleven billion barrels a year 1965, and the rate of consumption doubles every ten years. This means that crude oil will be gone in between 24 and 32 years.

SM: How long will it be before administrators pay attention?
KW: The only thing that will get people to change is the severity of the problems. Like at the moment when I say that we’re moving into an ice age, most people say, “Hah. That types him – you know, he’s nuts.” But ten years from now, things will be weird enough that people will be saying, “By God, so that’s why it’s snowing in May!” … Everybody is alerted to the fact that there is a large and obviously educated group frightened stiff. All kinds of people are running around making dire and legitimate projections. But I don’t think that the public is really alarmed. Look, an ice age is a six-degree drop in temperature, and we’ve already got a third of that in New York City, and nobody even notices. I think you have to drop blocks of ice on people before they become aware that the weather’s changing.
SM: If you had a mastodon charging down Wall Street you might get some action.
KW: Stephanie, there are mornings when I get up and think, “It’s got to be all wrong, it’s got to be a dream. It can’t be this bad.”

What can we learn from this?

The first thing I noticed is the air of snooty elitism. No? Is it any wonder these people don't resound as much as they'd like with Kiwanis members, Catholics, etc.? It's ironic that he seems to be apologizing for his "square" appearance... if he's so counterculture, why is he so concerned about his "image"?

Second, the enviro-academo-scientists - "a large and obviously educated group" - of the age were predicting with alarm:
- mass smog deaths in Long Beach by 1975
- crude oil will be gone sometime between 1994 and 2002.
- a coming ice age(!!), the signs of which would be obvious by 1980, ten years hence.

Well, at least at the end of that excerpt, he acknowledges that he might wake up and realize "it's got to be all wrong... it can't be this bad." I wonder when that happened.

Can you imagine a ban on internal-combustion in California? (And Mr. Watt LIVED in California! What was he thinkin'?!?)

Of course, the "large and obviously educated group" has done a 180-degree turnaround since 1970. 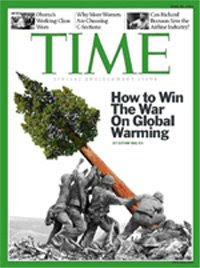 Silly scientists! They once thought the earth was flat! Later they thought the universe was revolving around the (spherical) earth. And much, much later, they were wringing their hands and predicting the upcoming Ice Age.

Ultimately, the critical question is... when we arrive at 2046 and gaze back nostalgically at 2008, will we get a big chuckle out of the hand-wringing predictions of Algore and his global warming disciples? Or will the survivors be saying, "Dang! I sure wish people had paid more attention"?

Here's what I would say, if I had the attention of all six billion -plus of my fellow humans (my Earth Day message for 2008):

If you've been paying attention, you realize that some folks who should know are very concerned about the health of our planet, and claim that human activity is causing climate change on a global scale.

We must recognize that legitimate science is constantly evolving as new discoveries are realized. However, we cannot dismiss the theory that we may indeed be contributing to global climate change. If it's true, it is a serious issue.

Regardless of whether we are changing the climate, we all can and should try to minimize our impact on the environment. The environmentalists describe it as living a "small-carbon-footprint" lifestyle. Long before "small footprint" became fashionable, I learned the concept of "leave no trace" in Boy Scouts. The best lifestyle is the one which impacts our environment the very least. (You can choose to disagree, but you would be wrong, at least from an environmental standpoint.)

If you're serious about it, every day should be "Earth Day" for you. (And every hour should be "Earth Hour.") Don't just profess "awareness" - talk is cheap! Commit to yourself to waste less. Send less stuff to the landfill. Use less power and water. Make fewer trips in your motor vehicle. Evidence suggests the single most significant thing you can do to reduce your impact is to drive less. Seriously! (A bonus is that in most cases, a "low impact" lifestyle is also a less-expensive lifestyle.)

I realize that the vast majority of you can't even comprehend what I'm talking about. You don't have power or heat or motor vehicles. You don't send anything to the landfill. You depend on everything you can gather for mere survival. This message isn't for you. But if you're fortunate enough to have a dwelling place with heat and power, and a private motor vehicle, or several, this challenge is for you.

If your level-of-commitment is to wear a flannel shirt and Birkenstocks, and drive a Volvo (or even a Prius), and subscribe to Outside Magazine, and eat organic produce, and wring your hands and preach to the rest of us, please just SIT DOWN AND SHUT UP!!!

Thanks, and have a groovy Earth Day.

(Sorry - this one ran a little long. I hope it's worthwhile reading.)
Posted by Bikeboy at 12:05 PM

Very well put!
Before I had read down to your reference, I was thinking of the "Leave No Trace" ethic. I definately want to leave this campsite as good or better than I found it. That doesn't mean making lots of other people "aware" of it, it means taking care of my own backyard (and saving money and being healtier in the process).
Thanks for leading by example!

Very well put. Interesting to see the views and predictions from then.

The article quotes Denis Hayes, a coordinator of the first Earth Day in 1970. He says that Earth Day today is like "Americans who drive their SUV to the supermarket and then grab a canvas bag from the back of the truck to pick up a quart of organic milk."

It seems that many today will go no further than well-meaning gestures without considering more significant lifestyle changes.