I brought the new-to-me Surly Long Haul Trucker (2014 model, in "smog silver") home a couple weekends ago.  Today I let it see the light of day for awhile, as I installed some preferred accessories.  I put some new pedals on (with flat platform on one side, SPD clip on the other)... I installed a Cateye cycle computer... and most visibly, I installed some Planet Bike Cascadia fenders - in bright orange.

I'm quite pleased with the contrast between the silver frame and the orange fenders. 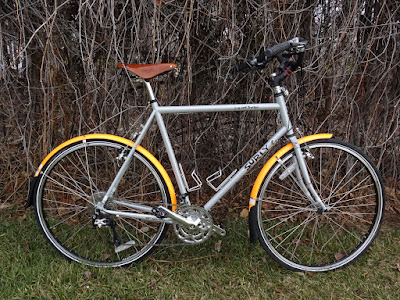 You will notice the upright-style handlebars, which were installed by the previous owner (along with the sweet Brooks B17 saddle).  I'll likely try some other model handlebar.  I don't think I'll go back to the drops - I hardly ever ride in the "drop" position any more - but I'm not delighted with the full-upright position, either.  I'm looking at the Jones "H Bar"; It has an almost flat profile, but offers multiple hand positions, when taped up for such.

This is my post-retirement bicycle, so I've got time to tweak.  Until then, it will probably serve as a "Sunday Rider" - I'll take it out for a spin on picture-perfect days.  (The Missus should be thrilled that this geezer is buying another bicycle for post retirement, rather than a sweet La-Z-Boy.  I'm a firm believer in "use it or lose it."  I'm slowing down, but hope it'll be at least another 15 or more years before I come to a complete stop... or my kids force me to give up bicycling because it's just gotten too crazy.)

Posted by Bikeboy at 4:34 PM No comments: