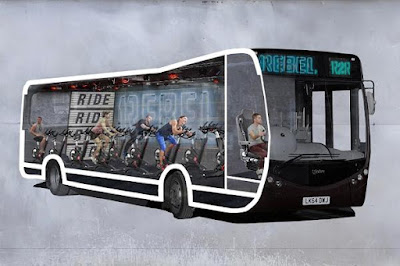 Full disclosure:  They have a gym at my place of work.  The first winter of my employment, I signed up and rode a stationary bicycle maybe half-a-dozen times on icy winter days.  I could NOT stand it!  I sorely missed the breeze (or wind and sleet) in my face... and the potholes and traffic, too, I s'pose.  I'd rather walk to and from work... or ride a bike fighting traffic and dodging potholes... than ride an exercise bike in a moving bus!  But... different enthusiasms make the world an interesting place.
Posted by Bikeboy at 3:17 PM No comments:

On Friday and Saturday, May 13 and 14, I went with some friends on a ride down the Weiser River Trail. It's been on the bucket list for some time; last September as we completed our north Idaho riding, we casually discussed doing the Weiser in the spring. We made it happen.

Friday was sunny and it got pretty warm in the afternoon... mid-80s. Saturday was overcast most of the day, occasionally with rain in the distance. Not a drop fell on us. It probably got up to the mid-70s. Wind was a minor factor for just a few miles.

In a VERY few places, the path was reasonably smooth.  For probably 75 of those 86 miles, it was covered with rocks 1-3 inches in diameter, abundantly enough that you were bouncing over them, squishing through them, dodging them, etc. Made for a real bone-pounder of a ride. And then there were some places that obviously become a mud-bog on wet days. Dried mud, and we were dodging gulleys and grooves. There were probably 25 livestock gates along the route... half had narrow "courtesy openings" that would allow a hiker or cyclist thru; half had to be opened and closed. (Did the engineer of the train have to open and close those gates, back in the day?)
On the second day, we saw a lot of snakes! Most were gopher snakes... a couple of garter snakes (most likely), and one antisocial rattlesnake. We were happy to part company and go our own ways.

I'm really glad we went... but because of the surface quality alone, I probably won't return, and would have second thoughts about recommending it to other riders. (Or at least I'd give them a heads-up about what to expect.) On both days, it was a HUGE relief to finally get onto relatively smooth pavement.

If it were paved, like the Coeur d'Alene Trail up north, I'd already be looking forward to my next adventure on that trail!

REALITY CHECK: They have VERY little money to work with; I believe the only funding source is a voluntary "Friends of the Weiser River Trail." And maybe a few bucks kicked in from the little towns along the path. We waited in Weiser, at the bottom, for 3 hours while our drivers went up and retrieved the cars. While we were there, a guy stopped who works for the trail. I struck up a conversation; he told me that every spring it's a fairly major effort to get it opened up. Fallen trees that have to be cut away; Landslides that fall across the path; Bridges that need surface reparations on a routine basis; Their budget barely covers those things, let alone any improvements. (Imagine how expensive it would be to just "roll" those 84 miles and lay down some fine, packed gravel, let alone put asphalt down! I guess you get what you pay for.)

ACCOMMODATIONS: We stayed at a place called Mundo Hot Springs, just out of Cambridge, ID. All 7 of us rented the "hostel" facility - which sleeps 7... cost us $12.50 each! Cheap! It was spartan, but clean and comfortable enough. As one would expect, it had a hot-spring-sourced swimming/soaking pool. When I talked to the people on the phone, I told them we'd probably be arriving fairly late in the afternoon, and we'd want to get some dinner... and could they stretch their 8pm pool closing time a little? They assured me they could work with us. But I obviously interpreted that wrong - we got back from dinner (in the next town over) at 8:30. She told me, "Sorry - you're too late.  If you'd been here an hour earlier..." Bummer! Well, at least the showers were warm and abundant. (There was also a bathtub in the "hostel" - just sitting there in the middle of the room! I guess we could've taken turns in the tub! hahahaha!) Next time - assuming there is a next time - we won't expect to use the pool any time but the published hours. (8pm closing on Friday night, when it's still light at 9pm, seems pretty early. But I know those little towns tend to fold up early. Not very "touristy.") 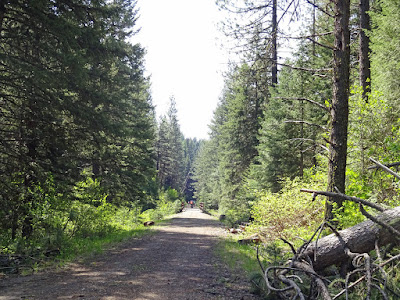 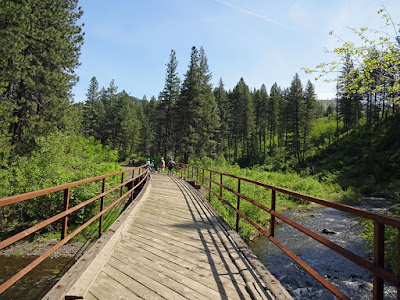 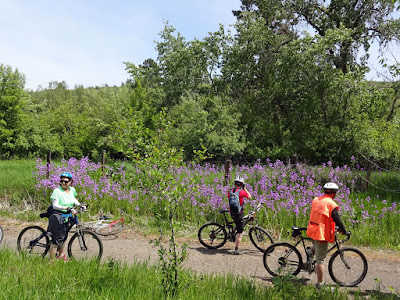 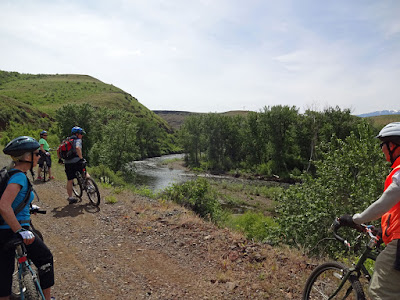 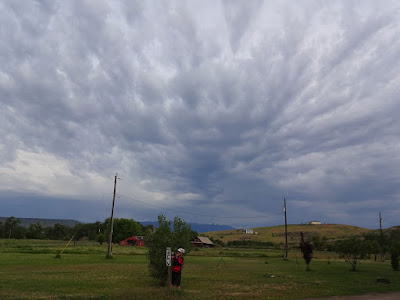 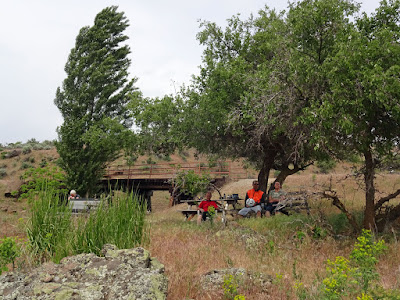 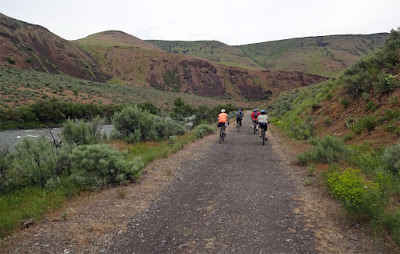 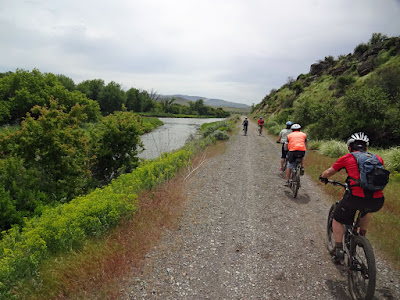 Posted by Bikeboy at 8:43 PM No comments:

This should be, in every way, one of the premiere months to ride a bicycle in Boise. But I always have mixed emotions.

While the weather has turned for the better, and the fragrance of springtime blossoms hangs in the air... it is also the month when the casual cyclists show up en masse.

Some are probably just out of practice. Some are incompetent. Some seem to be willfully ignorant of the rules, and/or oblivious to their surroundings. They ride as though they have an invisible force field, that will protect them from encounters with other road-goers.

They seem to be causing an inordinate amount of carnage this year. In the past 36 hours, there have been at least three motor vehicle vs. bicycle injury accidents.

And then this afternoon (the very next day), I was witness to the aftermath of a car-bike crash I haven't seen reported yet. I rode up onto the scene. A young fella, maybe 11 or 12, was sitting (at least he wasn't lying!) in the road, surrounded by helpful citizens. A pickup was blocking one lane. Another young fella about the same age was looking on with a helpless expression from the side of the road; he was holding up a bicycle with a twisted front wheel. I could hear the first responders converging - I cleared out. Based on just that, it's pretty hard to assign responsibility.

Does "who's responsible" matter? The people who are responsible are the most likely to say it doesn't matter. I believe it's very important, to determine where more attention might be warranted, in both enforcement and education.

A half-hour before I rode thru the accident scene, I had my own close encounter with a couple incompetents on bikes. They both looked to be in their early 20s. I first encountered them as I arrived at a busy intersection just as rush hour was beginning. They were running a red light; I had to brake to avoid colliding with the second guy. I turned and followed... because that was the direction of my travel. I was happy when they took the sidewalk, leaving a clear bike lane for me to go by. But - lo and behold! - at the next curb cut, the front guy came off the sidewalk and back into the bike lane without warning, right into the space I was occupying. He was riding like he was alone on his private highway. I hollered "hey"! (The equivalent of a horn.) He took great umbrage at my shout, and of course his response was the universal/Neanderthal/all-purpose "Be fruitful and multiply!" Only not in those words. (Did he feel embarrassed? Or was he so totally clueless that he didn't realize the near-miss he was responsible for? I'll never know.) Sigh...

Well... they say that May is "Bike Month." Nice to see people out enjoying it, I s'pose. And Boise Bike Week is coming up, May 14-21! Look over the schedule and join an event or three! I always enjoy the Pedal Power Parade (Saturday 5/21, 5pm); I plan on being there with the granddaughters.
Posted by Bikeboy at 8:20 PM No comments: