On Sunday at church, following the worship service, we had a brief financial planning presentation. I'm sure it was to make people think about their expenditures, budgets, savings, etc., going into a new year. It was presented by two retired gentlemen who are members of our congregation. Both had very successful careers (one an accountant / small business owner, the other an insurance guy).

A few guesses from people in the audience.

The answer - "Your car." ("The first biggest waste of money is your second car.")

This fella doesn't hate cars - in fact, he said he and his wife are finally down to two cars for two licensed drivers. He was just making the point that cars are a major and unending source of expenses. And perhaps our society is so car-centric that a large percentage feel they just couldn't survive without one.

I don't hate cars, either. In fact, I love some cars. For 20 or 25 years of my life, beginning around age 10, I was obsessed with cars. I'd get kicked out of class for drawing pictures of cars rather than paying attention. When I was 18, a buddy and I visited the Harrah car collection in Reno... I was shooed away from a row of brand-new Ferrari 375GTB Daytona sports cars, by a couple of burly security guys. I was sitting in one, behind the wheel. (Harrah was also the west coast Ferrari importer.) I've owned a few really nice cars, mostly earlier in life, including a '73 BMW 2002, an El Camino, a '72 Toyota FJ40 Land Cruiser. (Golly! I wish I still had 'em!) I like to watch Formula 1 Ferrari onboard camera videos on YouTube. (Try it! Amazing!)

But at this point in my life, I'm so very happy that the wife and I make do with one car between us, and that I am able to bicycle (and occasionally motorcycle) for my transportation. That saves A BUNDLE on car payments, insurance, fuel, maintenance. It gives me a bit of wiggle-room in a middle-income family budget that would otherwise be stretched tight like an overinflated balloon.

(If I were to buy another car, it would be something eminently practical - a Camry, or Accord, or maybe a Honda Element or small pickup. And almost certainly used - I'm not willing to pay the 25% premium for brand-new. I'm also amazed that some people willingly cough up another $300 or $500 or $800 a month for prestige/image, or "big" that will rarely be useful.)
Posted by Bikeboy at 12:26 PM 1 comment:

First, little city. (Boise is still on the "little" side, I maintain.) There is a story on the Statesman website about the bike sharing program that is launching in 2014, if the honchos have their way. I've commented before, most recently in September.

Really, there's not anything new to report. The annual pass remains at $75 (providing unlimited use, in 30-minute increments). Weekly and daily passes will also be available. The 14 stations scattered across town will cost $20k-30k each to install. The bikes will probably be "3 speed cruisers." If you lose one while you have it checked out, you'll probably have to cough up $1200 to replace it. (Sweeeeet cruiser, huh?!!)

I like the concept of bike share! And it really makes sense in densely-populated cities with lots of tourists and downtown apartment dwellers. The demographics are a little different in Boise - not a huge tourist trade, and relatively few urban apartment dwellers (where space is at a premium and a "shared" bike would therefore be more attractive). But it could very well be successful here, if you measure success in usage.

If you measure "successful" by the program being self-sustaining, it's less likely. Most or all bike share programs are subsidized, either by the government or private industry. (Driving a car or riding a city bus are also subsidized.) My only misgivings about the Boise Bike Share are the government subsidies. As a fiscal conservative, I question the expenditure of public dollars for yet another new program, when we're already so deeply in debt. As one commenter on the Statesman website said, "The amount of money for bike share programs is dwarfed by corporate subsidies. Bike share gets a crumb or two while corporate interests get their own cake." That is true... but a million bike shares, pathways, bridge rebuilds, highway projects, etc., etc., and suddenly you have multiple cakes' worth of crumbs!

Get some deep-pockets local private enterprise - Zions Bank, US Bank, Micron, Gardener Company, Albertsons - to sponsor it, and I'm all in!

Now, Big City. Chicago has seen a major uptick in the number of bicycle commuters. As bike lanes have expanded, and they've kicked off their own bike share (second in scope only to New York, in USA programs), gas keeps getting more expensive, more people have taken to their two-wheelers.

Bike lanes, and maintenance of bike lanes (including winter maintenance) aren't free. And a city councilman recently suggested a $25/year cycling tax to offset those expenses. Story HERE. Some - the anti-bike people - spoke up in favor. Others mocked the idea. "Maybe pedestrians ought to be charged a shoe tax to use the sidewalks." There are other questions - how is it enforced? being a major one.

I can see both sides. As a libertarian/conservative, I'm totally in favor of the actual beneficiaries of the facility, whatever it happens to be, footing the bill. And I'm happy to pay my fair share. But what is it?

Everybody benefits when people choose bike transportation, in the sense that the roadways become incrementally less congested, and air quality incrementally improves. And even if I don't own a car, I benefit from having the roads, so the UPS guy can bring stuff to me, and the garbage man can take stuff away.

But should the person who rides 50 miles a year, pay the same "tax" as the person who rides 5000 miles a year? And how much wear-and-tear does a bicycle inflict on the infrastructure, compared with a Prius or a Peterbilt? It's very difficult to make any sort of objective assessment. (Even a per-gallon fuel tax is "rigged," because miles per gallon doesn't always equate to wear-and-tear, need for infrastructure, etc.)
Posted by Bikeboy at 1:01 PM 1 comment: 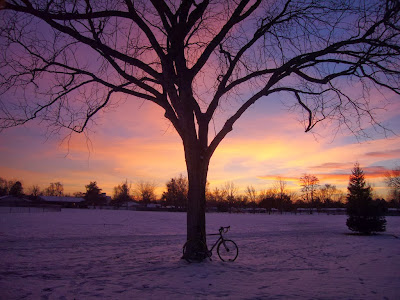 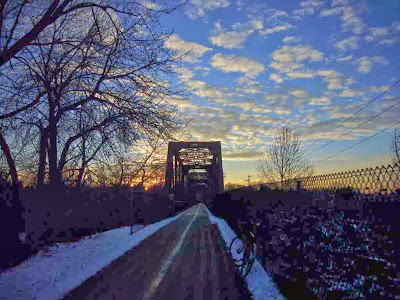 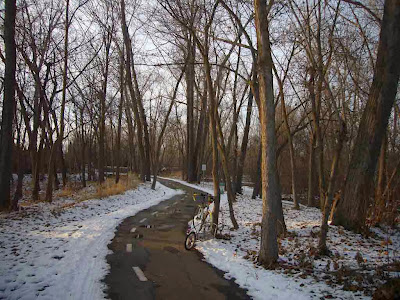 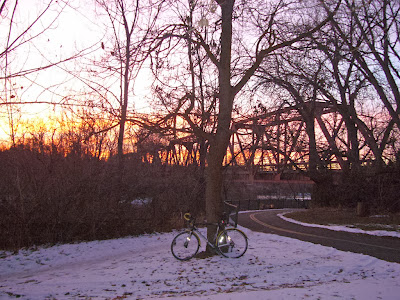 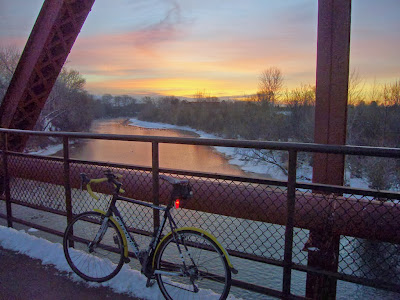 Why you should never bike to work

A fella named Brendan Leonard has written a witty column... read it HERE.

Mostly he's poking fun at the lame excuses that are often heard, for why people don't.

9. It's too dangerous.
"The absolute best thing is to stay in... your car, because no one's ever been killed when they're inside an automobile."

7. You have to go to the gym after/before work.

6. You can't show up all sweaty and smelly for your job.
"Your co-workers will be all, 'Bob, what the hell did you do, bike to work today? It smells like somebody's gutting a week-old deer carcass in your cubicle.'"

5. You don't have the right bike for it.
"The only bike you own are your Trek Madone, and your single-speed 29er, neither of which will work. You'd have to go out and buy a dedicated commuting bike..."

4. You can't be wearing a bike helmet and messing up your hair before work.

3. The route from your home to your office would be suicide on a bike.

2. What if it rains?
"Thanks to umbrellas, sprinting from your car to your office, and sometimes holding a newspaper above your head, you haven't gotten wet outside of your shower since 2007."

1. You would have to change your routine.
"Please. Give up your 45-minute drive into work, the drive that energizes you for the day ahead? Give up interacting with all those other fun, friendly, courteous drivers on the freeway? Sitting in traffic? Road construction? Merging? Not a chance."
Posted by Bikeboy at 1:41 PM No comments:

Now and then, somebody asks me, "When do you switch out an old tire?"

When the part that touches the road isn't black any more, that's my indicator.  Actually, I noticed a few little red blotches a couple weekends ago when I cleaned up the drivetrain, and I've been riding on good luck since.

This tire gave me fantastic service - between May and today, it rolled over 3482 miles - with zero flats!  Sah-WEEET!  I'm totally sold on Vittoria Randonneurs!  (A slightly wider, and significantly better-treaded tire went on, for the winter months.  That's good, because there's 2 or 3 inches of snow on the ground out there.) 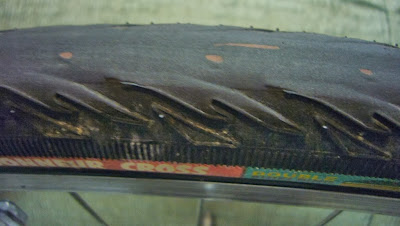