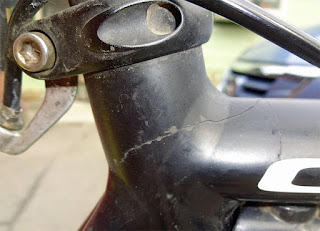 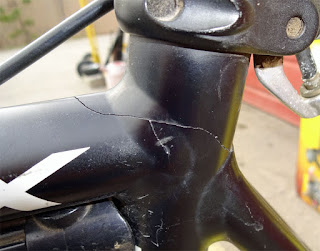 I went in and took a look - and even a quick test ride - on a "Quick" model urban bicycle.  It's an upright-handlebar road bike, and this particular one had one chainring on front and a very wide-ratio 10-speed cassette on the back.  I liked it - a lot.  BUT - it would essentially duplicate the Long Haul Trucker bicycle which I anticipate riding far into the future.  So, I may look at a lower-end mountain bike for playing in the foothills and desert.  (I'm retired now, and that should afford more opportunity for recreational bicycling.)  I say lower-end, because the Cannondale lineup appears to start around $650 and goes well into five-figure stratosphere!  (Oh my goodness!)  I'll report on what shakes out.
Posted by Bikeboy at 2:00 PM No comments:

Why is this guy smiling? 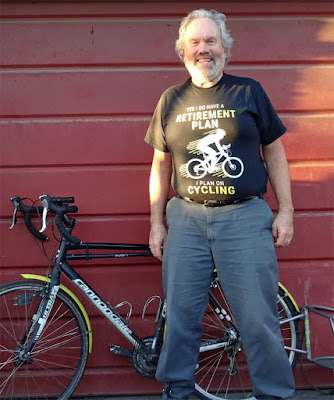 March 15 was my last day toiling for my daily bread - after 44 years of full-time employment, I've joined the vast army of fixed-income senior citizens!

I rode to work this morning, before daylight, same as always.  On the way, I was entertained by three characters who were sharing the infrastructure:
- a bearded, beanie-cap wearing hipster, shivering and weaving jauntily up the bike path - on an E-scooter.  (That guy will be paying Social Security, so I can collect Social Security!  Like I've been paying for 50 years.)
- a SUV motorist playing tortoise-and-hare with me for a few blocks, from stoplight to stoplight.  It's so very satisfying to watch 'em go zooming ahead with a furious roar and a cloud of street dust... then slam on the brakes at the red light...  as I mosey up slowly behind, arriving just as the light turns green.  Repeat... Repeat... (I know the light timing patterns after riding the route thousands of times before, and paying attention.)
- One final smart-phone zombie, lurching across the street as I arrived at the bike room.

The awesome people at Boise Cascade have been signing my paycheck for the past 24+ years.  What a great place it was to work!  And I've always appreciated the delicate irony that I attended high school two blocks away (Boise High), at the very time my last work home was rising mightily out of the ground.  I've got many wonderful friends there who I will miss dearly.  The work?  Not so much.

I told my office colleagues:
- Judge Judy and Wheel of Fortune – every day!
- Putter around, get in the wife’s way.
- Yell “Get off my lawn!!” at the neighbor kids.
- Keep the checkout line waiting while I count out the exact change.
- FOX NEWS!!

I've got work to do, at first.  Sprucin' up the homestead.  Probably until early summer.  It'll be pretty sweet NOT having a fixed agenda every day; I'm confident I'll stay occupied.

I expect my bicycle mileage to increase, rather than drop, even though I'm no longer commuting to work.  I've got a "retirement bike" that needs to have some meaningful miles put on it.

Hoping to do a Coeur d'Alene Trail run in late summer, shortly after Labor Day.  At a leisurely pace, because I've got no place to be, or schedule to keep.

I was arriving at the office this morning.  (At 6:50am the sun isn't up yet, but there's light in the sky.)

Riding along a downtown street.  A gal stepped off the curb, directly into my path... middle of the block.  She didn't look in either direction, and her attention was totally focused on her handheld gizmo, which was lighting up her face.  She had the earbuds, with the white cord dangling down.

I did the right thing, and slowed down instead of plowing into her.  She noticed me at the very last second, but didn't really alter her trajectory, and when the crisis was over, she went back to whatever I had distracted her from.  (I'm sure it was VERY important, or she wouldn't have been so focused on it.)

Is it any wonder that Pedestrian Deaths Reach Highest Level In Decades?  (Story HERE.)

Gosh!  Ain't "smart phones" great?  How did we survive for thousands of years without 'em?  (And why was life worth living, before they came along?)

Posted by Bikeboy at 7:48 AM No comments:

Another frame bites the dust

On Saturday, 3/2, I was doing a much-needed drivetrain scrub on my primary bicycle - a Cannondale - and noticed a pronounced crack around the very top of the seat post, above where it joins the top tube.

I've been riding this frame since the summer of 2012, and it probably has 30,000+ miles on it.  (And it was a warranty replacement for a frame that I'd only been riding for maybe 2.5 years, and far fewer miles, that had the early signs of a similar crack.)

When I was done with my maintenance, I went on a ride, and rode into George's Cycles on State Street.  (That's the shop where this frame was paired with my components, and I rode away.)  They took a look and acknowledged it should be covered by the warranty.  They took some photos and said they'd get the wheels in motion.  Last time, my recollection is that it cost me about $200, for the labor involved in swapping everything over to the new frame, and for a new front derailleur.  (There was a fitment issue between frames.)

I'll probably keep riding it until it fails, or until I get it replaced.  Because of the location of the crack, even if it "catastrophically" fails, it will only result in the saddle/seatpost rotating loosely around the inside the seat tube.  I won't be face-planting or leaving a trail of ground-off flesh or bone fragments along my route.

This is disappointing.  Up until the failure of the frame in 2012, I'd ridden Cannondale bicycles for probably 20 years without a hitch.  (I've still got my first Cannondale frame... I bought just the frame when I saw it in the back room of a long-gone local dealer, and outfitted it myself.  It's difficult to part with old bikes - they are like old friends.)  But - the reality is - bicycle manufacturers probably don't "overbuild" bicycles for Clydesdales like me.  You don't see a lot of 240-250 pound guys bicycling 5000-6000 miles per year.  I may not spend a lot of time standing on the pedals and giving it everything I've got, but even gentle forward-back, or side-to-side motion on that seatpost, over the course of 30,000 miles... bikes just aren't built for that kind of stress.
Posted by Bikeboy at 1:37 PM 1 comment: