One of the common excuses used by people who choose not to bike-commute to work is, "There's not a good place to park my bike."  That has NOT been a problem at my office, over the 22 years I've been working there.

My friend Thomas is an engineering/manufacturing genius.  His "day job" is keeping the big office building operating properly... but as a moonlighter, he's truly a Renaissance Man.  He has a passion for hot rods... his tastes lean toward American muscle cars, but I think he can make anything run.

Probably six years ago, the office was dealing with a sudden onslaught of bike riders - due to nice spring weather and expensive gas.  They did some shopping and discovered that there aren't a lot of sturdy multiple-bike racks out there.  Thomas and the management decided that manufacturing a rack would be the way to go.

I'm proud to say I was a "consultant" on the first one.  I explained to Thomas the pitfalls of commonly-occurring bike racks... we measured tire widths, etc.  He took the assembled information and built a sweet rack.

Since then, he's built three or four more.  Each one is a little more refined than the one before.

He's currently finishing one up, and he gave me a tour.  This one has one meaningful functional enhancement... he's added one slot for a "fat bike" tire.  And - this one is "personalized" for the building where it will reside.

There's no need to bolt these racks down... when they're empty, they probably weigh 500 pounds.  I told Thomas our great grandkids will still probably be using them. 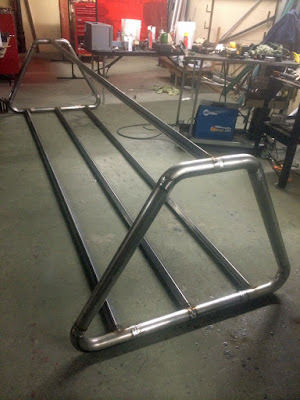 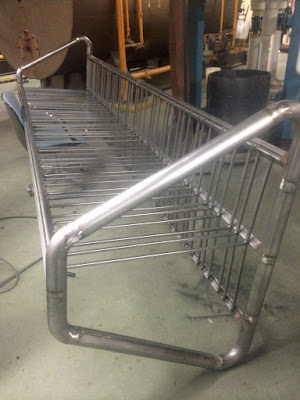 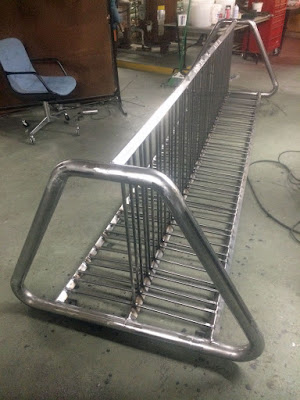 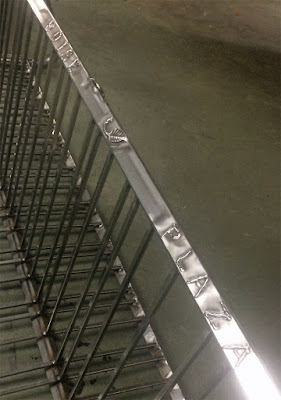 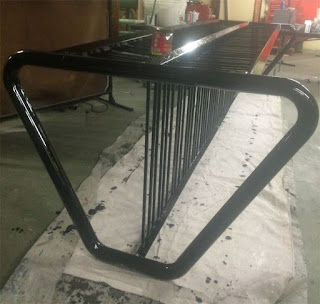 Posted by Bikeboy at 7:17 PM No comments: