Motorcycle riders have a common saying and belief: "You won't see many motorcycles parked at the therapist's office." Suggesting that riding a motorcycle may avert mental health problems. Maybe you don't see bikes parked there, either.

I happened upon an interesting article, "Jogging in forest twice as good as trip to gym for mental health." The study seems to indicate that communing with nature - "being around trees and grass" - lowers brain stress levels and soothes the brain that's suffering from depression and anxiety. Working out at the gym is not effective, because "only activities carried out in a natural environment outdoors were found to be associated with a lower risk of poor mental health."

Bicycling isn't mentioned specifically. And there are stress-filled situations, from time to time, for a transportation cyclist. (Although they are much less frequent than for a "transportation motorist." Or so my experience would lead me to believe.) But I can totally identify with the therapeutic effect of bicycling, particularly when the scenery is nice and traffic is light. (ALL of my bicycling is "in a natural environment outdoors.")
Posted by Bikeboy at 11:56 AM No comments:

It's probably safe to say that in that one 9-day stretch, I drove more miles than in the past 3 years combined, and bought more gas (169 gallons) than I've bought in a single year in many many more years. We passed through the outskirts of Omaha, but that's the only place where we dealt with any traffic to speak of. Just mile after scenic mile, mostly rolling down the same 2-lane highways that I prefer when I'm bicycling or motorcycling.

Our vehicle - a 2000 Honda Odyssey minivan - got surprisingly good gas mileage, ranging from about 21mpg to over 30mpg on one eastbound tankful (65-75mph, but with a strong tailwind all day).

As much as I enjoyed the trip, it was a genuine relief to wake up Monday morning and not slide behind the wheel and spend the day lookin' at the world thru a windshield. Bike transportation is so much less complicated and so much more free.

(We leave Friday morning again for a drive to the family reunion at Bear Lake. Sigh...)
Posted by Bikeboy at 12:39 PM No comments:

Brain-buckets... to mandate or not?

I always wear my helmet... by choice. Every time I strap it on, I anticipate that it will be a total waste... but I've had a couple mishaps in my lifetime where it at least saved me a lot of pain and rehabilitation, if not my life. (Power-slammin' your head into the pavement could mess things up - that styrofoam can soften the landing up considerably.)

Some well-meaning folks believe that helmet use should be mandatory. And in fact, there are some helmet controversies going on, north of the border up Canada way.

In Ontario, the chief coroner is recommending that helmet use be mandatory. He cites some interesting figures... only 27 percent of cyclists killed in the province between 2006 and 2010 were wearing helmets. (Story HERE.)

Meanwhile, 1500 miles or so west of there in British Columbia, helmets have been mandatory since 1996. Although nobody argues that helmets make cycling safer, critics argue that people are dissuaded from riding bicycles by the law. Chris Bruntlett has a bike-advocacy group, "The Church of Situp Cycling" (clever!). He says "We have seen the impact of the mandatory helmet law and it has killed off the idea of a short, spontaneous and slow bicycle trip... where you go out for a coffee or groceries, the idea you need (head) protection discourages people from riding and they will take the car or bus instead." (Story HERE.)

As much as I'd like to see all cyclists wear helmets, I can't support the notion of laws mandating it. Adults should be able to make that choice. And that choice is likely driven by the circumstance... a long road ride might merit a bucket, a quick trip to the corner market, maybe not. (I wear a helmet if I leave the driveway. But others should be able to choose.)

My advice, as always, would be, "If you use your brain, wear a helmet. If you don't use your brain... well, it probably doesn't matter so much."
Posted by Bikeboy at 3:57 PM 3 comments:

Greetings from the Heartland

The Bike Nazi is in Rochelle, IL, a smallish city an hour or so out of Chicago, following 4 days of driving down 2-lanes mostly, thru Montana, South Dakota, Minnesota, Wisconsin, Iowa, and of course Illinois.  The objectives were/are:
- to retrieve a motorcycle trailer I bought on the Ebay way back last November and a friend has been storing ever since, and
- to get a view of the Fruited Plain.

The wind was brisk on Days 2 and 3 (Bozeman to Rapid City SD, and Rapid City to New Ulm, MN... made me wish I was bicycling (east-bound only!).  In fact, "brisk" is an understatement with regard to Rapid City - we started the night in our tent at a campground, but threw the air mattress in the back of the car, because gusty winds were pretty much blowing the tent over.  Horrible!  (I collapsed the tent deliberately so the poles wouldn't get turned into scrap metal.)

Iowa is supposed to be very bicycle-oriented, so I hope to see more rider/tourists than we've seen so far as we head back thru Iowa.

Gas prices are about the same in Rochelle as they are in Boise; at most places in between they are cheaper - as much as 35 cents/gallon cheaper in the wide open spaces of SD and MN.  (An oddity - mid-grade gas in many spots has been less than "regular," because mid-grade contains ethanol, and apparently they want to encourage ethanol consumption... since there's corn growing as far as the eye can see in many places.)

My "glutes" are pretty weary of sitting in a car seat day after day; 'twill be nice to be back in the saddle again... should happen by Sunday.

(Don't even think about burglarizing my house - we left surly people behind, and they have acquired an attack bunny in our absence.)
Posted by Bikeboy at 7:13 PM No comments:

I've never attended a high school class reunion. I spent enough time in detention that probably nobody remembers me. It might be interesting to do, just to see who got old, and who stayed young like me! (haha) I'm Boise High Class of '71; we just had our 40th last year.

If you're thinking of attending a class reunion, but are worried that you've gotten "out of shape" since your hormone-charged high school years, follow the example of Kent Menser, 68, of Columbia, MD. He hopped on his bike and rode 600 miles - "across Pennsylvania, Ohio, Indiana, and halfway across Illinois" to the reunion gathering in Chillicothe. He and his riding buddy averaged about 100 miles a day, including one 140-mile day. (I couldn't've done that in my prime!) Story HERE

Pedal for the People Festival

If you pedal, and you like to party, looks like Boise is a good place to be this month.

Some of the more "interesting" events include The Helladrome, "a looped velodrome/cyclocross/obstacle course on steroids," bike rides to the Shakespeare Festival, a kids' bicycle hillclimb contest, the "Bare as you Dare II" ride (adults only), nostalgic "tweed ride" and vintage bike ride, "chainless" bike race (hmmm...), etc.  If all the scheduled events aren't nearly as cool as the one you imagine... well, let 'em know what you're thinking of, and get it added to the calendar!

Looks like fun! And may raise some funds for the very noble BBP.

(A personal note: due to various standing plans and obligations, I'll only be in town for a few days over the next two weeks. It breaks my heart because I've ridden my bicycle every day since mid-October, and I'll be leaving the bicycle behind. But all streaks have to come to an end, huh? I'll definitely check out the events on the days I'm in town.)
Posted by Bikeboy at 10:35 AM 1 comment:

The U.S. Postal Service is introducing some new "forever" stamps with a bicycling theme. 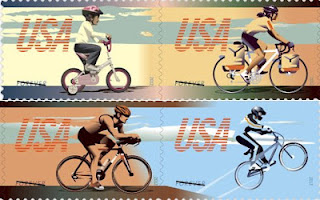 In fact, today might be the official unveiling, in Minneapolis.

I don't send much through the mail any more (yeah, it's largely my fault that the USPS is awash in red ink)... but if these stamps last forever, I may have to pick up enough of 'em to finish up my lifetime.
:-O
Posted by Bikeboy at 1:18 PM No comments:

If you love bicycles, you'll love 'em even more after looking at THIS COLLECTION of 49 photos, snapped in many places around the world.

Intro (by Lane Turner at the boston.com website): "Globally, over 100 million bicycles are produced every year - over 60% of them in China - easily doubling world production of automobiles. Efficient, clean, and cheap, pedal power in all its forms can solve modern problems with basic technology, and offers a health benefit to those cranking away. And it's hard to beat the simple joy of riding a bike. Gathered here are images of people around the world as we pedal for a reason, or just because."

Amen, Brother Lane!
Posted by Bikeboy at 3:59 PM No comments:

I was headed for the office this morning, northbound on Americana (4-lane road with bike lanes). I had to exit the bike lane to pass a slower cyclist and to avoid a temporary road-work sign that was blocking the bike lane. I checked my rearview; there was plenty of room to safely make the move.

The driver coming up behind me apparently didn't see it that way. A woman in a red Dodge pickup truck. She laid on her horn for probably 10 seconds. Nice! And tromped on the accelerator as she went by. Then, of course, braked hard as she came up behind another vehicle at the next traffic signal.

I suspect it's her husband/boyfriend's pickup; it had a lot of dirt bike type decals on it. (But ya never know; maybe she's a dirt bike enthusiast.)

I pulled up next to the passenger window and put my hand over my heart then extended it to her. My intention was to signal to her, "I'm sorry if I inconvenienced you! Can't we all just get along?" Very Ghandi-esque.


She reciprocated by thrusting her hand in my direction, and extending her longest finger (the middle one). I'm not really very good with sign language. Doesn't that mean, "You're Number One!"?? But, she had a rather clenched-teeth expression on her face. Not really very becoming. Perhaps decaf would be a good option. I smiled and waved, and rode on up to the intersection.

As is almost always the case, we played "leapfrog" as we proceeded. She would zoom ahead with the other rabbits to the next stoplight, then I'd catch up in my slow-but-steady tortoise pace.

Cars make people mad. I s'pose I can understand it - I'd be mad if I dealt with that car stuff, too. And I bet if you asked that gal's co-workers, they'd all probably say she's really nice.
Posted by Bikeboy at 9:49 AM 2 comments: