If you're anywhere near the "city of trees" (yeah, that's what they insist on calling it), our fair community will be hosting New Belgium's Tour de Fat this Saturday, August 18. "The Bike Parade begins at 10 am at the Fountain in Ann Morrison Park, but be there early to register."

If you've not participated in the Tour before, it's sort of a combination of Woodstock revelry, Rube Goldberg inventiveness, and bicycle evangelism. There's always an awesome parade, in which all types of bicycles and bicycle-like contraptions are ridden. The partying continues all day; the "Finale" is at 3:30pm. At each tour stop, they award a custom cruiser-style bicycle to somebody who pledges to hang up the car keys and ride the bike for a year.

Last year school teacher Matt Monette, apparently in a moment of bicycle fervor, agreed to give up his car and ride a bike. Boise Weekly did an interesting profile of him a few months ago - read it HERE. I can't help but wish they'd pick me... but I'm sure it's more about finding a new convert, than "preachin' to the choir." I wouldn't be able to give up my car - I did that 27 years ago.

Although New Belgium suds are consumed in massive quantities at the Tour, the vibe is always peaceful and family-friendly, from what I've observed. I've taken my granddaughter in the past, and we've had a fine time... much to my chagrin, I have an out-of-town commitment this weekend, so I won't be there.

It's actually a pretty big deal that the Tour always comes through Boise... there are only 15 stops, and most are in cities much larger than Boise: Nashville, Atlanta, Chicago, Denver, Los Angeles, San Francisco... the only explanation is that we have enough "bike culture" to support such an event in appropriate fashion.
Posted by Bikeboy at 8:55 AM 2 comments:

A recent editorial on the NY Times Website discusses legal and "ethical" cycling. The author, Randy Cohen, confesses to being a rule-breaking cyclist, a violator of the come-to-a-full-stop laws because "uninterrupted motion, gliding silently and swiftly, is a joy." (Uninterrupted motion - that's something that's maddeningly rare when you're driving an automobile in traffic.)

Cohen argues that even if his running of stop signs is illegal (and he mentions Idaho's exceptional bike-stop-sign law), it's ethical, because he's essentially only endangering himself. Particularly when compared with the motorist who doesn't come to a full stop but rather "blithely ambl[es] into the intersection against the light while texting and listening to your iPod and sipping a martini." Yeah, he exaggerates.

He believes that the bikes-are-vehicles analogy fosters resentment when motorists see cyclists behaving differently. He mentions the attitudes in European cities where cyclists have their own extensive networks of dedicated facilities, and everyone of every age rides, and bicycles are a more ingrained part of the culture. That's all nice and dandy... but he hasn't convinced me that when we're sharing infrastructure with cars, we shouldn't behave as much like motorists as we can. (Although I'm grateful to be a beneficiary of that famous Idaho law.)
Posted by Bikeboy at 8:44 PM No comments:


For a month or so, I've been meaning to report on my replacement bicycle.  And, I've got mixed emotions.

How did Mario Gutierrez feel when his ride, a horse named "I'll Have Another," went lame before leg 3 of the Triple Crown? Maybe that's a little how I felt when my beautiful Cannondale T1 bicycle came up lame.

In April, I was giving 'er a Saturday wash, when I noticed what I thought was a streak of oil. But it didn't wash off. And, upon closer inspection, I discovered that it was a tiny crack. Right where the seat tube meets the top tube. 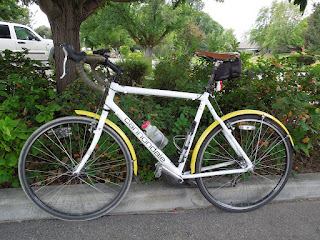 When I first discovered it, I hoped it was just a crack in the paint. But it grew. And I noticed a near-identical crack on the other side. 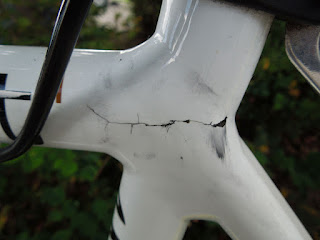 I took it in to George's Cycles, the local Cannondale dealer. They immediately declared it defective, and said they'd get started arranging a replacement. But - it was complicated. First - Cannondale currently doesn't build a touring model. The closest thing would be a cyclocross-type frame. Second - Cannondale no longer manufactures any bikes in the USA; they moved it to Taiwan. Sign of the times! (Is there a mass-produced bicycle built in the USA any more? Far as I know, Cannondale was the last.)

The nice people at George's tried to find me an identical frame, hanging in the back of a warehouse someplace, but no such luck. So they moved toward getting a current-year frame; all the components would be swapped off the old bike, and onto the new one.

In the meantime, I rode. When the replacement frame arrived, I rode the old one in. They had it for just a couple days, and the new one was ready.

It's not as pretty as the white one... but it'll be much easier to keep clean-looking. It doesn't have the "Handmade in USA" decal. I'm guessing it's a pound or two lighter than the old one. And - the geometry is close enough that once I got it "dialed in," I can hardly tell I'm riding a different bike. 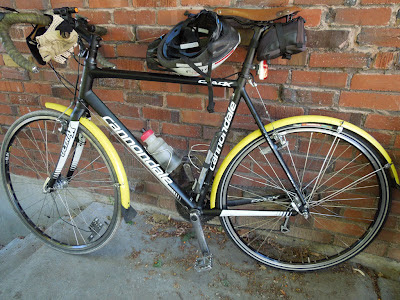 This is my fourth Cannondale... they've all been "bullet-proof" until that crack showed up. I'm going to assume it was just a freak thing, and I'll be riding the replacement bike for many, many trouble-free years. (I hope I wear out before it does!)
Posted by Bikeboy at 10:34 PM 3 comments: