I feel small pangs of guilt about my feeble advocacy of bike transportation, as of late.  I may not be writing about it, but I'm riding every day.  I hope you are, too!  I rode just over 400 miles in January, and am 400+ miles for February, as well.  I've cleaned the drivetrain once this year.  I've fixed one flat tire (created by a tiny piece of stiff wire).

Since my darkness-and-weather-related crashes in mid-December, I've been crash-free, and I'm back to 105%.  Ah, who am I kiddin'?!!?  It takes me as much effort to go 15mph nowadays, as it did to go 20mph, 25 years ago.  I'll never be 100% again... at least on this side of mortality.  But despite the incremental slowdown, bicycling remains as satisfying as it was back in the beginning.  (Perhaps even more satisfying, in the sense that I'm extending the boundaries.)

The downside of the cold/wet months is the cold, and the wet.  And the gunk that accumulates on the roadway and therefore on the drivetrain.

On very rare occasions, I feel a bit of jealousy toward the motor-vehicle masses.  When it's 32 and raining, a warm dry cockpit looks pretty attractive.  But when I borrow the wife's car... and find myself in traffic, or sitting at a red light with the motor doing nothing but burning fuel... I long for that 2-wheeler.

There's an upside, too... the winter cyclist has the bike infrastructure mostly to her- or himself!  I don't think I've ridden the Greenbelt one time this winter, when there weren't already bike tracks.  But other than that evidence, sometimes days go by between cyclist sightings.  (Not as much as 25 or 30 years ago, however... ridership is up year-round.)

The days are getting warmer... and the paths more crowded.  Particularly the Greenbelt, on a sunny weekend day.  People have spring fever... and a lot of those people seem to have forgotten how to share the pathway.  Or they don't notice that they're sharing.  (Another upside of year-round cycling... you don't forget the little details over the winter lay-up.)

Granddaughter Bonnie turned 3 on Saturday... and she's almost too big for the bike seat we've used for 2+ years.  Particularly when she starts rocking back and forth while her feeble old grandpa is trying to ride a straight line.  We'll have to explore our options... she's too big for the baby seat, and she's probably still too small for the "tag-a-long."  We'll have to figure something out, because she sure loves to go bike riding!  (Imagine being a 3-year-old in a car seat that's too low to see out, except maybe the sky... and how much more enjoyable it would be to see the sights... feel the breeze... smell the smells!)

My north-Idaho bike-riding friends have stated some interest in riding the Weiser River Trail when the weather starts getting nicer.  Clancy shared some tips with me... he's a veteran of pretty much every recreational trail in our beautiful state.  Perhaps in May, if we have a zero-precipitation weekend... 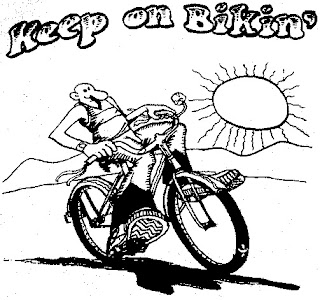