Autumn brings us the best scenery of the year.  And interesting developments for transportation and recreation cyclists in the area. 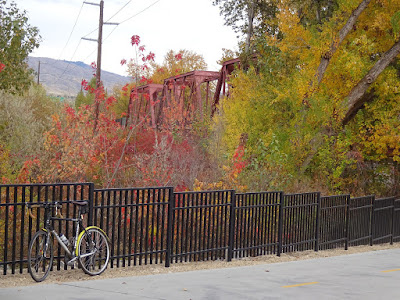 They have completed a repaving project on the Greenbelt below Warm Springs Mesa... it's nice!  After a long time waiting, the Esther Simplot Park is slated to open on November 2.  They are converting Jefferson Street, which traverses downtown east/west, to a two-way road with bike lanes.

On a more personal level... the family stable of bikes is increasing.

My bride had a knee replacement surgery in April, and recently graduated from stationary bicycle to road-going bicycle.  We found her a nice used Townie 21-speed on the craigslist.  (She's getting the other knee done on November 1.)

My daughter used a generic "mountain" style bike out of the stable to go riding with Mom... so I found her a Townie on the craigslist.  (They like the "classic" styling with curved tubes, etc.  I like the aluminum frame and slightly-narrower tires.)

Since those acquisitions we've been on several rides together, including a Greenbelt tour downstream to Eagle Road and back, from Ann Morrison Park.

And... granddaughter Mackenzie has outgrown her 24-inch bike, so just this evening I found her a used Peugeot first-generation mountain bike.  It needs some work - new cables and such - but the price was right and I expect she won't be wanting to do a lot of riding before next spring anyway.

Yup - life is good.  Bicycle transportation makes it that much better.
Posted by Bikeboy at 9:53 PM 2 comments: