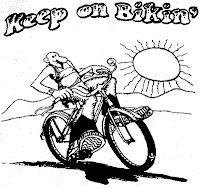 Way back last January, I thought there was a decent chance that I'd arrive at a milestone before the end of the year - 150,000 bicycle miles.  I was about 6100 miles short at the time, and for the last few years I've been averaging around 6k miles per year.

At the beginning of December, I was 329 miles short.  And this afternoon, I tore through the tape!  Woo-hooooo! 150,003 miles and counting.

In the morning, I rode to work over a light snow covering, but the day actually turned out lovely!

China has come full-circle in a very short time!

Until quite recently, the vast majority of Chinese did their commuting either by bicycle or public transportation... car ownership was relegated to the wealthy elite.  But as China has industrialized and become the source of affordable merchandise for the world's insatiable consumers, the country has also become the world's biggest auto market.  People have abandoned their Chinese "Flying Pigeon" bicycles.

But now, according to an interesting article, the comfortably wealthy class in China is reverting to high-end bicycles.  Analysts estimate 10 percent growth in the bicycle market, and even higher in the "high-end" market.  Chinese consumers are spending thousands - $16,000 for a handmade British Moulton, $38,700 for a limited-edition Colnago.  A Chinese financial firm ordered 1000 spendy bikes to give out as year-end bonuses to its employees.  (Ah, that my employer could learn something from this!)

Merry Christmas, everybody!
Posted by Bikeboy at 10:35 AM No comments:

The days are short and the nights are long. (Global darkening?) As I was bicycling in to work this morning - in almost-dark - I caught an occasional glimpse up ahead of a red light. I assumed it was a taillight on another bicycle. And I was right.

I've got my little Chinese single-AA LED flashlight, for my headlight. When it has a fresh battery, it's amazingly bright... I can see signs reflecting back at me a half-mile up the road. But it uses the juice to produce that bright light, and as the battery power diminishes, the light grows weaker and weaker, until I can't even see it on the road just in front of me. Ultimately it quits blinking, and just glows a steady night-light glow... at that point it's essentially useless for being seen or seeing. (I carry a spare battery, so I won't get into a hazardous situation.)

Another common sight, this time of year... people wearing a thick knit cap... with a helmet perched on top.  They're obviously safety-minded, but in the event of an accident, unless the head-impact was directly on top of their head, the bucket would almost certainly just get knocked sideways, rather than providing any impact absorption.

It's a little sobering, but true... our lives can literally depend on that gear. If you're sharing pavement with 4000-pound hurtling missiles, sometimes with distracted or impaired pilots, it is absolutely imperative that you take measures to be as visible as possible! For me, that means functional lights that can be seen 360 degrees around the bike, and light clothing. Some people are obviously comfortable riding alongside the road on their black bike in dark clothing, without any lights and muddy reflectors. I see 'em regularly.
Posted by Bikeboy at 9:34 AM 1 comment:

Much has been made of the Mayan calendar... you know, that big round stone thing that apparently ends on December 21 of this year.

That's only about a week off... are you prepared for the End of Days?

Here's a front yard that's filled with Inflatable Carnage... 10 days from now, it might be carcasses scattered about, instead of balloons!!!
:-O

(But slightly more seriously... I'm pretty confident those guys just ran out of rock, or got tired of chiselin'.  And maybe the Mayan Desk Calendar went out to the end of January 2013... ya never know...)

The question remains... are you prepared?

If I'm not prepared, it ain't because I haven't been warned!

I'm a long time Boy Scout - the motto is "Be Prepared."

My dad was a Great Depression baby.  Back a couple generations ago, people were much more self-sufficient.  The knew they better be prepared, or make do... or do without.  (We're pathetic and helpless by comparison, nowadays.)  When I was a kid, we had a basement "fruit room."  It had varying inventories of fruit that my mother and/or grandma canned, canned goods, flour, sugar, wheat, etc.  Once a year or so, we'd pile into the station wagon, and my dad would fill it with cases of food to replenish the supply.  Most of it we rotated pretty faithfully.  Some - like powdered milk (yuck!) - didn't get used before it spoiled.  (How do you tell when powdered milk is spoiled?  But... I imagine powdered milk isn't quite so bad nowadays, and even then it wasn't so bad when used for cooking.)

For my entire life, my church has encouraged us to have a reserve of food, water, and cash for that "rainy day."  I've also seen fuel mentioned, from time to time, but I believe the emphasis is mostly on being able to cook and stay warm.

How about being "transportation prepared"?

I don't think transportation is given much thought.  And maybe it's not a primary survival requirement... but there a LOT of people who, if they couldn't get gas for their vehicle, would be pretty much helpless.  I'm thinking mostly of the people who live way out in the suburbs - too far to get to any of their routine destinations on foot.

I'm not saying I have it all figured out, or that "survival transportation" wouldn't be a problem in my household.  But I'm confident that whatever December 21 brings, my trusty bicycle will still roll down the road, even if the power if off and the gas is gone.  It might just be the cockroaches, the bicyclists, and Mad Max out there on the mean streets.
Posted by Bikeboy at 7:16 PM 1 comment:

Do you just throw away your old rusty chains?

I thought so, you earth hater!

(Me, too. Yeah, every time I feel guilty about it.) 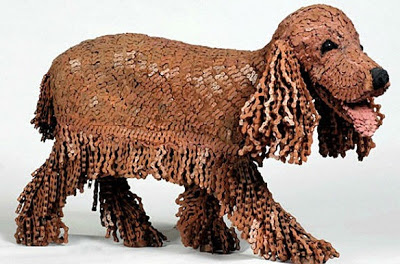 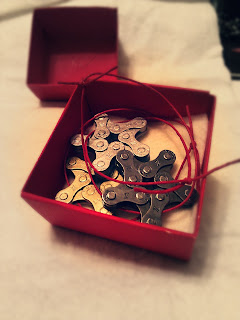 For a couple months, I've been reading about a cardboard bike being developed by a guy in Israel.  (Thanks to my friend Bob T - he noticed it, too, and emailed me a link to that particular article.)

A cardboard bike may not hold much appeal to somebody who rides a sweet carbon-fiber or steel, or even aluminum bike... but to some impoverished person in a third-world country, a bike that can be produced for "$9-12 a unit," it might look much better than walking, or riding atop a burro or water buffalo. 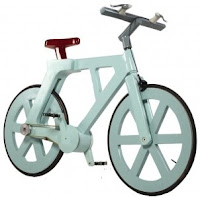 And, when you're riding your cardboard bike, you can protect your noggin with a cardboard helmet!  A startup company, Kranium, hopes to market them.  Apparently they provide better protection than the ubiquitous styrofoam-based buckets.  And interestingly, a custom fitting is part of the package... the thing is built to match up perfectly with the shape of your head.  (Making it a little spendy at around $130.  But a replacement would be cheaper, assuming the reason you need a replacement didn't also re-shape your skull!)

When I first heard about the cardboard bike and helmet, my first thought was - water damage.  But apparently the cardboard can be treated with stuff to make it waterproof.
Posted by Bikeboy at 8:28 AM No comments:

Do you remember "mood rings"?  Back in the day - if I recall, a year or two before "pet rocks," they were a fad.  They would supposedly change color to indicate what sort of mood you were in.  I believe the technology was based on skin surface temperature - definitely low-tech.

Technology has marched on.

Arlene Ducao is a research assistant at the MIT "Media Lab Information Ecology Group."  She's also a bike commuter.  And she has invented the "MindRider" - a bike helmet equipped with an EEG sensor that displays your stress level.

Ms. Ducao sees this as a possible way to improve safety for cyclists and motorists.  "One way of doing that is improving communication between cyclists and drivers."  Her helmet is just a prototype, but she wants to improve the ergonomics, and also a tracking system (probably a phone "app," huh?), so you can figure out which routes are high-stress and which aren't so much.

So - what color would your lights be?  I like to think that in most of my bike-riding circumstances, I'd be solid green.
Posted by Bikeboy at 1:31 PM 1 comment: