THE TIMES WE LIVE IN!

I doubt it made much difference to anybody, that I haven't posted anything in 6+ months.  I've definitely lost some steam, when it comes to advocating, I must admit.  I'm still trying to practice what I very occasionally preach... but it has become very obvious that there are bicycle advocates who are considerably more "zealous" about it, than I am.  (I have been occasionally submitting something to the Facebook "Boise Bike Lanes" group.)

Part of that may be due to how long I've been at it.  I've been what I call a "dedicated transportation cyclist" since 1986 - that's 35 years.  Things have changed in that time.  There are far more striped bike lanes around town.  I believe the attitude on the part of both roadway administrators and the general public is more bike-friendly.  And the battles that are being waged on behalf of cyclists have also evolved.

In the late '80s or early '90s, cyclists were a pretty rare sight.  The vast majority of trips over the road were in single-occupant vehicle.  Since then, there have been developments that have made alternate modes of transportation more attractive.  Gas is more expensive.  People are far more aware of "climate change"... or at least it's discussed more.  The population has aged... and society doesn't seem to put as much value on car transportation as it did a generation or two ago.  (Our public transportation in this area has NOT gotten much better, unfortunately.  Primarily because of low ridership.  But the eternal question... Which comes first - the bus or the passengers?)

On the other hand, our area has continued to grow by leaps and bounds.  There are a lot more people living in the suburbs, with a long daily commute.  The roads are wider.  Places that used to be open fields and meadows, are now seas of rooftops.  (As a life-long resident, that breaks my heart.  It's pretty much impossible any more, to leave from my house for a nice "bike ride in the country.")  Riding a bike from home in Kuna or Middleton, to a job in Boise, is NEVER going to be a practical choice, for the vast majority of people.

Nowadays, bicycle advocates are measuring the width of bike lanes, to make sure they are up to code.  As I can still remember many a mile on a 1-foot patch between the fog stripe and the weeds, I'm still exulting in ANY bike lane!

They are demanding "protected" bike lanes.  You know... something more than a painted stripe.  A curb... or bollards... or separated altogether from the roadway.  Imagine!  While I totally agree that such an infrastructure would be ideal, and would attract new cyclists (many on their E-bikes, because let's face it... PEDALING IS HARD!), and would make it far more kid-friendly than it is now... there is a price to pay.  And the administrators are having a hard time accepting that price.  Less roadway width for motorists, who still make up the vast majority.  Increased maintenance costs.  (A protected lane is going to me more expensive to keep free of snow... or it might just be abandoned in the winter.)  Etc., etc.  I'll always favor such improvements... but I no longer have the energy or inclination to "die on that mountain," as they say.

On a personal note... I've had a physical setback.

July 24th.  I was on Bogus Basin Road.  Went up there to try to get some sunset photos... you know, with Stack Rock in the foreground.  It turned out to be an ill-fated trip.  I climbed up a gentle slope, to get a better angle for a photo.  Stepping back down... a brief moment of inattention... I stepped on a curb, landed awkwardly on the ball of my foot.  My ankle extended in a bad way... foot folded up into my shin.  I limped home... since I was able to limp, and didn't feel a sickening snap, crackle, or pop, I figured I'd just stretched things out, and some rehab would bring it back.  I "rehabbed" for a month... still couldn't put any weight on the front of my foot, run, stand on tippy-toe.  Went to the doctor.  It took her 2 minutes to diagnose a ruptured Achilles tendon.

Long story short... I had surgery to fix it on November 17.  Dr. Neary was very happy with how the surgery went, and she says I should regain 100% of function.  After 5 weeks... maybe longer. 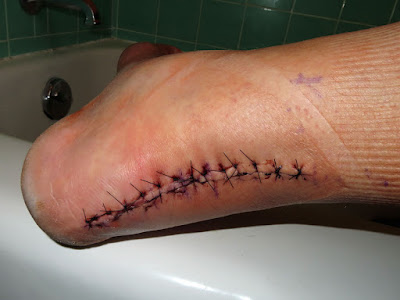 (Between July 24 and November 17, I bicycled 1400+ miles... but it was more like work and less like play.  At first it was downright painful... by the end it was just drudgery... pedaling for the sake of pedaling.  I look forward to feeling the joy again - and soon!)

I hope y'all are still enjoying quality time in the saddle.  Watch for me - I'll be back soon!