In 1986, I started riding a bike to and from my job. By 1997, I’d been mostly commuting to work by bicycle for 11 years.  But then I got a shiny new Harley-Davidson motorcycle.  (Purchased with money saved by bicycling.)  It was a compelling mode of transportation, and I started riding it to the office, once or twice a week.  Now and then, I still drove the family car, as well.  Just for kicks, that year I decided to keep running track of my transportation choices.


As our family started planning for another school year, once again as always I encouraged my kids to ride their bikes.  (Our schools are less than a mile away, over terrain as flat as plywood.)  They would probably say I’m too enthusiastic about preaching the Gospel of Bike Transportation.


There was much opposition, from kids and their mom.  “We’ll get all sweaty!”  “We’ll look like nerds!”  “We’ll have helmet hair!”  Mom, of course, was sure they’d be abducted en route, or get flattened by a runaway dump truck.  She also said, somewhat accusingly, “You don’t ride a bike everywhere.”  Pretty lame argument… but the gauntlet had been thrown down.  I decided I’d show her!


Ever since then, it’s been the bicycle to and from work, on all but a handful of days each year.  Whether it’s 105, or 5 below zero, or anywhere in between.  If it’s snowy, I try to stick to the lesser-traveled side roads.  If it’s treacherously slippery, I’ve been known to trudge to the nearest bus stop and take public transportation… but almost always with the bike on the front rack, in the hopes I’ll be able to ride home in the afternoon.


In addition, I get some “cardio” exercise every weekday.  (I’m lucky – my commute is about 3.5 miles each way.  Far enough to get a little “burn,” but short enough that I can commute in my work attire.)  My work commute is often my favorite part of the day.  I would never voluntarily go back to a car.  (Although I might re-think that, if somebody wants to offer me free use of a Porsche Carrera, or something similar.) 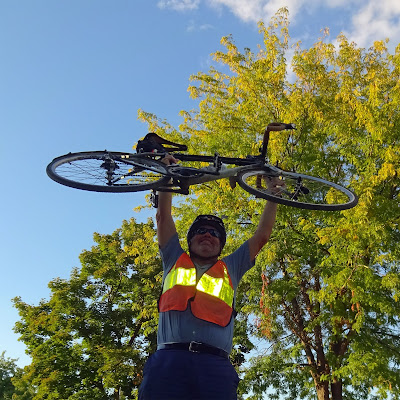