Wrist-slap from the "legal system"

Suppose your vehicle had a frosted-up windshield one cold winter morning. And let's suppose you were in a big hurry - no time to scrape that windshield - so you hopped in and drove away, peering through the defrosted "peep hole."

(I know what you're saying. C'mon! Something like that could never happen!)

Furthermore, let's suppose that you were stopped in that frosted-up vehicle, near the railroad track... and suddenly the train was coming! Oh, no! Gotta do something! But due to your frosted-up windshield, you failed to notice the guy on the bike, directly in front of you. As you stomp on the gas, you hear a crunch - you know you hit something! But, the train's a-comin' - you gotta get out of the way!

Apparently, that is exactly what happened to Maria Fregoso-Avina, down in Provo, Utah.


The guy on the bike was Douglas Crow. He was 69, a custodian at BYU... a job he'd held for 30 years and was planning on retiring from this year. He was the father of seven children, an avid transportation cyclist, and loved the outdoors. He was pulling a trailer with some gear in it behind his bike. Ms. Fregoso-Avina pushed him onto the tracks with her frosty SUV, where he was run over by the approaching train. 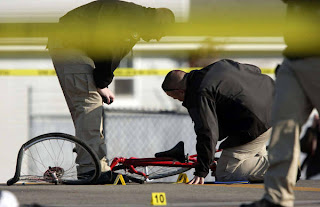 "Just a tragic accident," right? That's what her attorney said.

Could it have been avoided, with reasonable and responsible behavior?

So - what should the penalty be, if your irresponsible behavior - your willful negligence - directly results in the death of another person?

Well, in this particular case, Ms. Fregoso-Avina was sentenced to 210 days in jail. (A bit over 6 months.) With credit for the 56 days already served.

That will send a stern message to all drivers... right?

You are responsible for safely operating that vehicle! You better scrape that windshield, cuz if you don't and kill somebody, you could end up spending a few months in jail!

This story also states 'Lance Star, attorney for Fregoso-Avina, said she had shown remorse and had taken responsibility for her actions by pleading guilty to negligent homicide, something he says he advised her against. Star also provided letters from the community in support of Fregoso-Avina.

"I don't feel the facts support the charges," Star said. "But she wanted to give the family closure."' (emphasis mine)

As much as the actions that woman took disgust me, so does the mindset of that attorney.

Unfortunately, the legal system always looks on bike deaths as minor accidents. The best way to make some progress in showing the severity of these deaths is in civil court. This case probably would not of not produced much as the defendant does not have much money. I am not a sue happy guy, but this will accomplish the most. Here is a great article about "not seeing". http://urbanvelo.org/cycling-legalese-but-the-cyclist-came-out-of-nowhere/

Also where your HiVis clothing.154

How incredibly sad :( Another death of a cyclist, another incident swept under the rug. One can only wonder what it will take and how long it will be until these "accidents" are taken more seriously. Probably around the same time Americans quit driving like entitled a-holes and start having thought and consideration for where they are going, what they are doing, and the people around them.