... out of 50. Idaho was ranked #36 by the League of American Bicyclists, in "bike friendliness." (Down from #30 last year.) The rankings and some cool interactive charts and graphs can be seen HERE. Idaho's snapshot can be seen HERE (PDF).

Our neighbor to the northwest, Washington, was ranked #1. Another neighbor, Montana, was ranked #46. (Arkansas took the Booby Prize.) 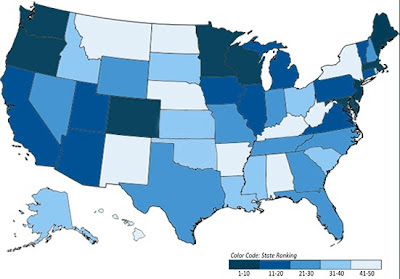 Strangely, Idaho's highest mark was for "education." That surprises me because I don't see much at all in the way of public education. Let me know if I'm missing something, but mostly what I see is good-hearted volunteers who are carrying the torch for educating Idaho's citizens about riding.

Poor Washington! The only direction is down for them! At least in the eyes of the LAB, Idaho still has plenty of opportunity.
Posted by Bikeboy at 10:52 AM

I'm really proud that my state, Massachusetts is at 3rd place! Congrats to Washington! First place!