Supposedly, the cars are safe. They use "roof-mounted video cameras, radar and a laser range 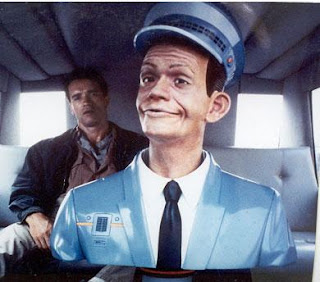 finder to detect surrounding traffic." They've logged thousands of accident-free miles in testing (with a human driver behind the wheel, ready to intervene if need be).

If I was driving a White Freightliner, or even an H2 Hummer or Ford Expedition, I probably wouldn't be too worried. Those cameras and lasers would probably detect and avoid plowing into my vehicle. But as a guy on a bike, I can't help but be concerned. Those intersection traffic cameras don't give me a lot of confidence, if the auto-car technology is similar. They are very hit-and-miss with a target as small as a guy on a bike (and I'm a pretty big guy on a bike!). When the only consequence of not being detected is red-light frustration, it's not that big a deal... but the stakes are considerably higher if a moving vehicle is comin' at ya!

I s'pose if they log a few million safe miles up and down the Las Vegas Strip, dealing with drunken pedestrians and more distracions and roadside "clutter" than pretty much anyplace, my confidence would be elevated. And... they can't be much worse than a human-behind-the-wheel, who's mostly driving his little fancy-fone and only occasionally looking up to see what's in front of his moving car.
Posted by Bikeboy at 9:16 AM

I wonder how they came up with the idea of self-driving cars. It's making me curious, but apparently you're right, we should be ready. Nothing stays the same forever, as people continue to invent things that makes our lives easier. One good thing about the google cars are that they're safe. And I have to admit, I like advanced things, since it gives off the feeling that we're already one step towards the futuristic age.