But in these parts, another type of intersection camera is becoming more prominent - the "traffic detection camera."

In theory at least, the cameras are connected to a computer that controls the intersection traffic signals. By analyzing the image captured by the camera, the computer detects a vehicle waiting at a red light, and triggers the signal to change, letting that vehicle proceed.

They are replacing the old-school ground loop - essentially a low-tech metal detector.

My experience with the ground loops has been mixed. At some intersections, they are a beautiful thing! If I know the exact placement, I can roll over it and trigger a green light at just the perfect time. At other intersections, you can park right on top of it, and it'll never notice you're there in 100 years.

So far, my experience with the cameras has been mixed, as well. They seem to be subject to the same issues that photographers deal with - size 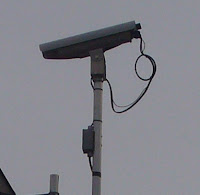 of "target," light conditions, etc. Particularly when there isn't much light, they often fail to detect a relatively small bike/rider, or at least that's my impression. On such occasions, I'm grateful for the statute that allows cyclists to proceed cautiously through the intersection, after coming to a full stop. (Of course, if cars are also waiting, the likelihood of the light turning green goes way up.)

Ya know what would be really nice? If both the detection cameras and ground loops triggered some subtle signal - a small yellow light, or a beep, or whatever - to acknowledge to the driver, "I'm aware you are there. Sit tight - I'll let you through." That would let us know whether we should wait, or start looking for an opening in traffic.

An interesting video clip, featuring ACHD traffic engineer Terry Little explaining the cameras, can be viewed by clicking HERE.
Posted by Bikeboy at 9:54 AM

Some of these work and some don't. Americana at River going south is good but the cam going North sucks.

Generally, I have better luck with the in-pavement sensor loops than the cameras.

I have contacted ACHD about a couple of cameras (the one at HP's west entrance completely misses me), and they try to tell me that I'm not pulling into the camera's depth of field, rather than adjust the damn things to detect an adult on a bicycle.

It's all a mystery to me. If I sit there too long and there is no traffic, I roll. Maybe ACHD should hold some sort of clinic?