My friend Bill had his bike stolen.

From right in front of a busy office building. It was locked in the bike rack.

Bill: "Yes, it was locked up with a cable and padlock. The whole incident was recorded on the security video. I filed a police report and they will be showing to see the video. The police said to go start checking the local pawn shops because that is a likely place where it will end-up." 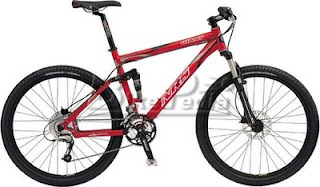 If anybody happens to spot such a bike, maybe being ridden by somebody who's too weasely and lowlife to be riding such a nice bike, any information would be greatly appreciated by Bill or the cops. Bill has the serial number, so he can positively identify the bike as his.

Here's a surveillance photo of the perp. If you recognize him, I'd recommend putting him underneath a 2000-pound rock, to immobilize him 'til the cops arrive. (Please make sure Bill's bike isn't under the rock!) 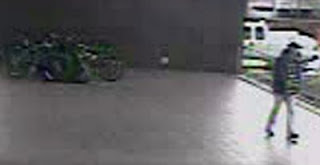 Our society is deteriorating. Keep that in mind, and be mindful of your wheels.
Posted by Bikeboy at 3:43 PM

That sucks. I am glad my bike gets indoor parking. Good time to brush up on locking strategies.
I use a U-lock for brief trips into the store. If it is going to be over an hour or 2 then I add a cable lock.

Like Clancy I use a U-lock and also add a cable lock when necessary.

My bike has a milk crate attached to the rear rack with a full-size slow vehicle sign so I'm hoping that the dork/uniqueness factor might also keep any potential thieves at bay.

I'm totally convinced that my bicycle is "visually unappealing" enough that it serves as a deterrent. It's a Cannondale bicycle... but it's got a thick layer of permanent grime. And fenders, etc.

When I go to the store or some other brief stop, the bike usually goes inside, at least into the entryway or someplace similar. (I'm too lax about locking it... I always rationalize that I'll be away from it for <5 minutes, but Bill will tell you it takes WAY less than that for a bike to disappear.)