I heard that the average nationwide price for a gallon of precious petrol has crept up to around $1.90. After bottoming out a few months back around $1.50.

That seems inconsistent with the cost of crude oil, which has not gone up (selling for around $40/barrel). 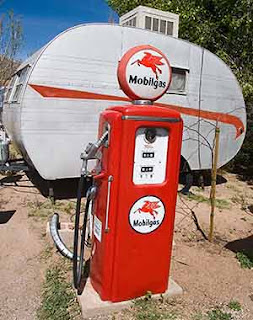 So - what's wrong with this picture?

Everybody is critical of the obscene profits made by the oil companies (except for the oil company shareholders, of course). But apparently their profits weren't high enough. And apparently people aren't angry enough about it to stop buying their product... they'll just taper off a bit when gas is selling for $4. I guess that's what you do when you're over a barrel.

It's nice to be watching mostly from the outside.

Of course on the rare occasions when I buy gas, the price I pay is affected by overall demand... not my demand.

There ought to be a graduated scale.

Here's another great idea from the Bike Nazi: How about being able to "bank" gas? I write out a check to Exxon-Mobil to buy 100 gallons at today's price... and then they keep it in their hole-in-the-ground until such time as I want to pump it. My balance (in gallons, not dollars) is stored on a swipe-card, just like a gift card at Best Buy or whatever. I could buy the 200 gallons I use each year in December, and burn 180 of it over the summer.
Posted by Bikeboy at 11:52 AM

Sorry, Gas and fuel banks are already out there. But it would be worth looking into. I have a feeling my wife would steal my cheap gas. http://www.firstfuelbanks.com/history/default.asp

The good news- I have over 3/4 tank of $1.50 gas in my Bronco. It gets driven about twice a month(ski hill) currently.

Would love to find a fuel bank in Boise.

It sounds like Idaho Power will be going to a tiered system, charging per usage level. It's not gasoline, but is shows that fuel charges can be based on how much you are using in relation to others.

Fun, slow ride in this morning!