Danielo mentioned that he switched over to his Kenda Klondike studded bike tires a few days back, and feels very comfortable on 'em.

In the bike rack at the office, there are four bicycles today - two of the four have studded tires. One is a "mountain" bike with some nice-looking Nokian tires at both ends. The other is a 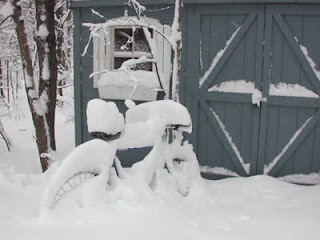 touring bicycle - very similar to my own - with fenders and some nice Schwalbe tires. A guy said he actually saw some studded bike tires at Wal-Mart. Weird. (I'm confident they would've been in 26" mountain-bike size.)

When the snow falls and the roads get covered with slippery stuff, it always puts me to thinkin' about studded tires. But the pleasant reality is - here in Boise, Idaho - it's rare (but not unheard of) for snow to stick for longer than a few days, or a week at the most. So, do I buy a $100+ set of tires that I'll only have legitimate use for, maybe 10 or 15 days of the year? So far, I've resisted for strictly financial reasons.

(I haven't missed a day of bicycling so far this time around. One icy afternoon I had a distant caroling gig, so I left the bike at the office overnight, and caught a ride with a colleague. The next morning I took the bus to work, then rode home in the afternoon.)

Peter White, of the New Hampshire bike shop named after him, has some good information about studded snow tires HERE, if you want to study up. There is a wealth of information on his website about everything-bicycle. (I also lifted the cool photo - of his shop - from the website.)
Posted by Bikeboy at 11:18 AM

I agree that it's difficult to justify getting studded tires in our climate. I resisted for a long time before finally purchasing some last winter after a few scary incidents. I reasoned that if they prevented one accident or nasty spill they would more than pay for themselves.

Studded tires work great on ice and compact snow but they don't really help in deep snow (especially after it's been subject to traffic). Under those conditions I become a pedestrian.

Peter White's studded tire page was a great resource, and based on it I obtained a pair of Schwalbe Marathon Winters. I have also found that this site has good advice for riding in a variety of winter conditions.

The tires may look cheaper as a form of insurance. Or try to get your employers to buy them with monies from the Bicycle commuter act.

I think I will be ordering some after playing in the icy,slushy ruts this morning.

Clancy, unfortunately even studded tires would not have helped this morning as there was nothing solid for them to grip. I did not even make the attempt and ended up walking to work.

The tires at Walmart are Kenda Klondikes. They're a steal of a deal at $40 a tire. I've been using them and they work great. They also have carbide studs which means they'll last longer. They're 26x2.10.