I don't pay too much attention to college basketball... but I do enjoy tuning in for the playoffs. You can always expect some great games in March.

No "dog in the fight" this year... but Baylor has caught my eye. I'd love to see 'em take it all!

For one thing, Pierre Jackson played at College of Southern Idaho... and in fact led CSI to a NJCAA Divison 1 championship last season. Jackson, from Las Vegas, is an unlikely basketball star at 5'10" ... in a game dominated by guys who go from 6 1/2 feet on up.

For another thing... check out their safety uniforms! Apparently some people hate 'em... but that's my favorite color!!
(-; 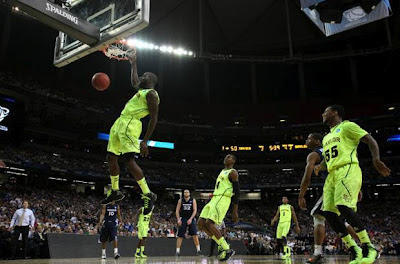 UPDATE Monday, 3/26. By stating my support for Baylor, I jinxed 'em. And so therefore I extend my apologies. I still like the uniforms!
Posted by Bikeboy at 8:31 AM

My eye's are burning.

I've been jinxing the Seahawks for years.