Christine Grant of Seattle has written an interesting article after observing some of the world's most bicycle-friendly cities. These are the lessons she learned, about what many of them share in common:

1. It's the infrastructure, stupid!
If the available roadways and pathways aren't perceived as safe, they'll never enjoy widespread use by casual cyclists.

2. Bike Share! Bike Share!
This is probably most applicable in large urban places...citizens are more likely to ride, if they don't have to commit to ownership (and maintenance, storage, etc.) of a bicycle.

3. It's safer than a soda.
Citizens need to buy into the health aspects of regular transportation cycling. (An education issue?)

4. Say "thank you."
Rather than viewing bicycle infrastructure as a huge financial burden, some cities "thank" transportation cyclists in a very public way. (After all, cycling is much cheaper than motor transportation, both for the cyclist and for those who furnish the infrastructure.)

5. Forget speed bumps... turn streets into backyards.
Motorists tend to ignore signs and traffic calming devices... it's harder to ignore benches, planters, and even a ping-pong table. (I had to "steal" this photo from the article. Who wouldn't love to live on a street like this?!!) 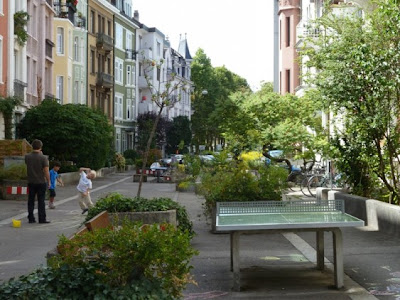 6. Let prices tell the truth.
There's no such thing as "free parking," for example. That huge parking lot surrounding your favorite mall? You pay for it when you spend money at the mall.

7. You don't need "bike clothes."
Yeah, you can ride a bike while wearing a necktie or suit, or a dress and high heels.

8. Electrify it.
In hilly places or for people with compromised health, motorized assistance can supplement pedal power. (But not those noisy little 2-stroke chainsaw engines, please!!!)

9. Admit it - it's emotional.
People who sit in traffic every day can't appreciate how satisfying the bike-transportation alternative is. Grant: "I spoke with dozens of urban cyclists who talked about the curious happiness derived from activating your senses and connecting with your city on a bicycle. One Amsterdam father’s voice actually cracked with emotion as he reflected on his morning and afternoon rides with his son. His toddler sat in a front-mounted childseat. The father talked about how nice it was to smell his son’s head during the commute to day care."

I am active with the Boise State "cycling advisory committee".
If Students/faculty/staff were to pay the actual cost of automobile parking instead of being 200-350$ it would be more along the lines of 900-1200$ annually. Each parking garage space is 12,000$. A nice bike rack that is cemented into the ground is between 500-1,500$. If any readers are worried about the validity of these figures please contact me for evidence. I could spout numbers like this off all day. Aside from incredible monetary savings, I will spare you all of the health savings. my 2 cents...maybe 3 ;)