Tale of the Saddle

When I got my new Cannondale T1 bicycle in November 2009, it had a very unusual saddle. I'd not seen another exactly like it before, nor have I seen one since.

It's a Selle An-Atomica Clydesdale. 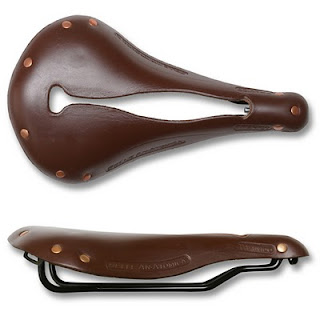 I gave it a favorable "200-mile report" here. I've really not mentioned it much since, but I've very much enjoyed it. It is, without any doubt, the most comfortable saddle I've ever ridden on.

I recently had occasion to appreciate the comfort level.

For you see - my An-Atomica saddle broke! (Doh!) In mid-February, in the middle of a ride, I noticed it seemed to have considerable extra flex. I rode on home, and discovered that both rails were broken, right behind the seatpost clamp.

I contacted the company, and after the exchange of some information, they agreed to repair it. (Officially it had/has a 1-year warranty, and mine was slightly outside of the warranty period. But we all agreed that a $150 saddle really should last longer than a year.) They told me to send it in. Surprisingly, I just received a replacement brand-new saddle; I expected a new frame, but the same leather (which was 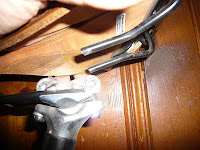 During the 3 weeks or so my An-Atomica was "offline," I rode on a more conventional saddle. It's one that I've logged thousands of miles on. And my first impression was, "Hey! This is like sitting on a post!" It was not uncomfortable on the sub-25-mile rides I mostly go on... but there's no doubt in my mind that the "butt hammock" provided by the An-Atomica would be way nicer on a 50-miler, or a multi-day bicycle tour.

I'm optimistic the replacement saddle will last much longer. It has to - no matter how comfortable, I can't justify $150/year saddle expense! (The only other saddle I've broken in 25+ years of riding was a $14.98 "Nashbar special.")

More detailed/technical info about the An-Atomica, and "saddle science," can be found on their website.
Posted by Bikeboy at 3:47 PM

Different brand, same idea. I switched from a stock Bontrager to a Brooks B17 about 18 months ago. When I received the B17, I couldn't imagine this contraption that felt like a leather brick could possibly be comfortable. To my surprise, it was fantastic! Once I got it properly adjusted, that is. I found I had to point the nose slightly upward compared to the stock seat because I kept sliding over the front and getting poked.

Scott, if my replacement An-Atomica fails, I'll most likely go with a Brooks B17. Same concept, but with a price point about half. (I've gotta stretch those shekels.) Everybody who has a Brooks seems to love it, after a 2-week break-in / adjustment period.

Obviously you can't neglect leather the way you can synthetic materials, but keeping it out of the rain is a small price to pay.

once I got the tilt correct, i really don't even need padded shorts . ..