It's Safety Week at the office. Thursday's topic was Bicycle, Pedestrian and Parking Garage Safety.

Officer Riley of the Boise Police Department came and gave an interesting presentation. (He is an excellent spokesman for BPD; they should be proud of the way he represented the Department.)

Riley described himself as an enthusiastic cyclist, and is sympathetic to cyclists. His personal opinion is that everything possible should be done by a community, and its police, to encourage citizens to ride. But he also acknowledged that there are many officers who, if they were honest, would say bikes don't belong in the traffic mix, and that cyclists create problems.

He said officers obviously have a tremendous amount of discretion as to when to issue a citation, or even a warning.

I brought up the fact that against-traffic cyclists are essentially never cited, and that bike violations, both by and against cyclists, are routinely ignored by the law-enforcement community. Riley agreed that it's a problem, and said it would only change as the population of road-going cyclists increases, and there's outcry from the community. (Right after our springtime fatalities, there was a lot more attention given to cycling behavior... but now we're back to business as usual.)

Some things to consider (for this area; the law likely differs in other jurisdictions):

- jaywalking - if there is a signal at the intersection to your left AND to your right, you have to walk to one of those intersections and cross in the crosswalk with the light. If you can't see a signal and a crosswalk in both directions, you can legally cross the street mid-block. (Yielding for traffic, of course.)

On the topic of bike laws...

HERE is an interesting piece: "How do we get bikers to obey traffic laws?" 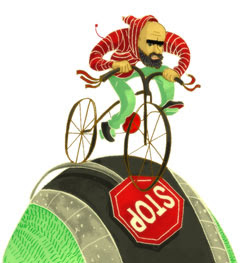 starts out by saying he "ran five red lights and three stop signs, went the wrong way down a one-way street, and took a left across two lanes of oncoming traffic." On his bike. He says, "Bikes occupy a gray area of the law. They're neither cars nor pedestrians."

He describes two philosophies of bicycle advocacy, "vehicularists" and "facilitators."

The vehicularists have the philosophy that cyclists fare best when they behave like, and are treated like, other vehicles.

The facilitators prefer special treatment, laws, and infrastructure for cyclists.

I can see merit to both notions, but I definitely lean to "vehicularist." As stated by Beam, "Vehicularists see the potential transformation of America into a Euro-style bike paradise not just as a far-fetched utopia but as an insult. Dedicated bike paths are an admission that the cyclist deserves pity and should be walled off from the world."

(I lifted the awesome graphic off of Beam's article, at slate.com)
Posted by Bikeboy at 12:50 PM

I dispatched your articles links to all my contacts and they all mate it including me.
Nj Speeding ticket lawyer