Now and then, a motorist (who obviously doesn't ride a bike, at least on the roads) will ask, "Why do you bike riders have to ride out near the CAR lane, instead of at the edge of the pavement where you belong?"

Do these photos help explain one reason? (There are other reasons.) 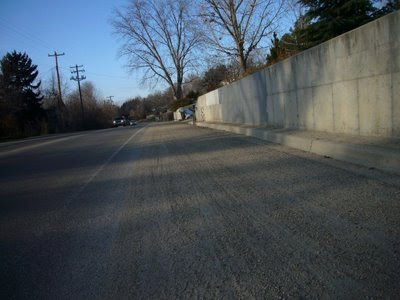 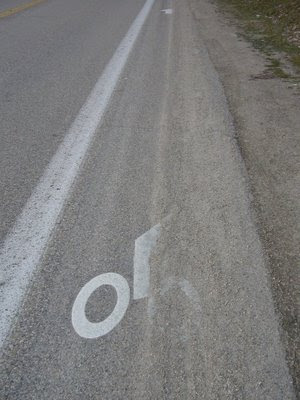 (If you didn't know better, you might swear that the sand gets dumped in the bike lane, rather than the motor lane.)

On those slippery mornings, road crews dump their sand in the motor vehicle lane.

As the snow and ice melt, the sand gets washed and blown toward the edge of the road, eventually settling where it doesn't get blasted about quite so much by the turbulence of passing cars.

Ironically, once the snow is melted, the sand reduces traction, rather than increasing it. And it's also the source of considerable particulate air pollution... that's why they'll sweep it up as soon as they can, even if they know they'll be dumping plenty more before winter is over.

For the sake of review, here's what THE LAW says: "Any person operating a bicycle upon a roadway at less than the normal speed of traffic at the time and place and under the conditions then existing shall ride as close as practicable to the right-hand curb or edge of the roadway except when reasonably necessary to avoid conditions including surface hazards that make it unsafe to continue along the right-hand curb or edge." (Idaho's law... but most states have laws with virtually identical wording.)

So don't come up behind me (us) and honk your horn, or gun the motor in that big ol' macho pickup truck. Thanks.
Posted by Bikeboy at 10:29 PM

That stuff is still like a dust bowl when a car passes. Probably if I wore glasses it would be better. No worries as they are picking it up now.

The sand can be a nuisance but where I commute I would not consider it to be a hazard. However, when the bike lanes and shoulders are covered with a thick layer of snow and ice (which accumulates in about the same areas as where the sand can be seen in the photos) I take my place in the normal traffic lane on the right tire track. I get an occasional honk but most pass me carefully.

Yeah, it's more annoying than hazardous - as long as you know it's there and operate accordingly. (The first road-rash spill I ever took on a bike was around-a-corner and hit a patch of springtime sand. I've NOT forgotten that lesson!)