Let there be light.

In these parts, the sun is almost peeking over the horizon at ride-to-work time. And there's plenty of sunshine still, in the afternoon. So, the days of daily headlight usage are almost over for another season. (Bob T recommends year-round light usage for visibility... so far I've contented myself with "passive visibility" in the form of bright clothes, during the day.)

I had good enough luck with an effective and cheap lighting solution that I feel good about recommending it.

Over the winter I used a light and bracket purchased from DealExtreme. 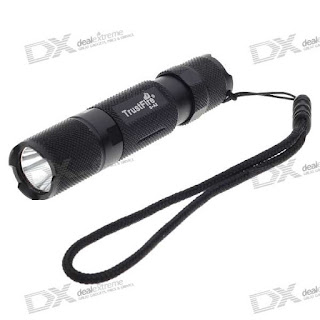 The light is called a "TrustFire S-A2," DX SKU number 36358. $12.60 delivered. (NOTE: The stuff gets delivered from China, so expect delivery to take at least a couple weeks. I always get anxious... but it always eventually arrives.)

I've had mixed results with other lights I've ordered from these guys - always with the switch. (It's unnerving when riding at night, and you go over a bump and your light goes off... or switches from bright to "S-O-S" mode!) But this one has served me faithfully without problems, for the better part of a year. It has 3 modes - high, low, and high/strobe. I normally use the strobe on my commute route, for maximum visibility. It's rated at 230 lumens... I don't know about that, but I can see it lighting up reflective signs 1/2 mile up the road, and I've had motorists flash their bright lights at me from time to time. And that's with 1 AA-size battery! (I started using rechargeable NiMH batteries - either Eneloop or Sony, because they supposedly have a longer "charged-up shelf life" than most. A charged-up battery has typically been good for a couple weeks of commuting trips.)

A bonus feature of this light, for me, is that it also makes a bright and handy pocket-size flashlight, off the bike. 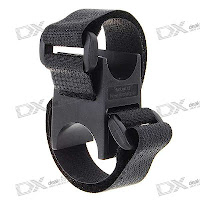 It's the model of simplicity - a rubber bracket that keeps everything in place, with a velcro strap to wrap around the handlebar, and another around the light.

Clancy has had good luck with bigger DX lights that use a more specialized battery... and they're handy because they're so bright you can peel paint with 'em, too! (grin) But I like the universal-battery feature. During the dark season, I typically carry spare batteries for headlight and taillight in my seat bag, just in case. (All year round I carry an AAA-size flashlight in the bag, and keep the taillight mounted... ya never know when you might get delayed on a trip, and end up needing a light for added night safety, even in the summer.)
Posted by Bikeboy at 1:28 PM

I always what motorist think when the signs start flashing. I also like the removable aspect to this light (unlocking bike from rack mostly).