Lots of folks in these parts do a little whistle-pig hunting, starting around this time of year.

If you don't know what a whistle-pig is, it's a ground squirrel. A tiny rodent about the size and shape of a chipmunk, 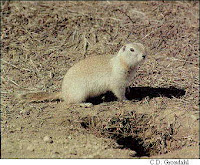 but not nearly as cute. They live in burrows in arid country such as this. (In other locales, "whistle-pig" might refer to a woodchuck, or marmot, or prairie dog.) They're called whistle-pigs because the males stand erect at the entrance of their burrows, and emit a high-pitched whistle to attract the "babe" whistle-pigs.

Obviously not for food, unless you were starving-hungry. But rather for "varmint control." Farmers don't like 'em because of the damage they can do to a field. Also, there's no denying that bloodthirsty hunters shoot 'em just because they make good targets.

If you don't know what a .50-caliber rifle is, it fires a bullet that's 1/2-inch in diameter and maybe 2 inches long, at a velocity close to 3000 feet per second.

What is it used for?

In the military, they might use it to shoot down an airplane or helicopter. Or to blast a hole through an engine block, thus disabling an enemy vehicle. Or for long-range "sniping" - hitting a target a half-mile or more away.

But civilians can buy 'em, too.

But those with the desire and the cash are typically either well-heeled collectors, or they enjoy some form of super-long-distance target shooting. (Rambo-types would need 2 - one for each hand.)

(More about this particular rifle can be seen HERE, if you feel so inclined.)

As an NRA Life Member, I not only support but relish the notion that if I chose to, I could have one of these monsters in my home arsenal. Is this a great country or what?!!

So... what does any of this have to do with bicycle transportation?

When I'm commuting to and from the office on my bicycle, and some yahoo goes by in his roaring, smoke-belching F350 super-dually turbo-diesel Xtra cab (or whatever), obviously headed for work just like me, it seems to this observer like somebody choosing a .50 caliber to go whistle-pig huntin'. It can be done - and I support the right to make that personal choice - but it just makes no practical sense.
Posted by Bikeboy at 7:39 AM

Thanks for the laugh. The whistle pigs will for sure be out this weekend. I forwarded this on to my diesel driving friends.

Gee, I thought you'd be taking the train of thought somewhere more like this: http://tinyurl.com/ce93jy That should keep SUVs from cutting you off, right? I must admit, now I really want to witness someone using a .50 Cal. to hunt whistle pigs - way too expensive, but a great spectator sport! Val

Ha Ha! Thanks for forwarding this blog Clancy. That is a great post! Let it be known that some of your Diesel Truck owning friends do commute via bicycle and the .50 cal. truck is happily waiting in the gun safe (driveway) until it is needed. You're not going to tow a boat, utility trailer, or yank somebody out of a snow covered ditch using a Schwinn. --Tad Jones

Tad: You're not going to tow a boat, utility trailer, or yank somebody out of a snow covered ditch using a Schwinn.

Seems to me that somebody who can afford a $50k ornery beast for his boat-towin' and ditch-rescuin' could maybe also afford a couple thou for a more reasonable M-F commuting vehicle. (Although I always feel TERRIBLE on those frequent occasions when I'm Schwinning to work, and have to leave some damsel in the ditch because I'm not equipped for a rescue operation! hahahaha!)

Confession: Tad's diesel hauls my boat to the lake and back. It still works great for being 1996.

Here is a response I got from a friend who lives the hinterlands:

"and while I don't disagree that a .50 cal makes a lot of sense for whistle pigs I would say that pulling my 5 yard trash trailer on my way to work with your bike seems a lot like bringing a pocket knife to a gun fight."

Of course he used to get paid to shoot Howitzer's at garbage cans.