Earth Hour is this weekend!

According to the official Earth Hour website, it's "the world's first global election between Earth and global warming," and "your light switch is your vote." At the website you can also "watch video and read stories about other witnesses and warriors involved in the fight against climate change."

According to them, no matter where you live, you observe Earth Hour Saturday at 8:30pm. They expect a billion people to participate.

They've obviously not thought this thing through very well. If we observed it at 3:30am instead, they could claim, like, 90 percent participation!

I'm not sure if the NCAA basketball playoffs will 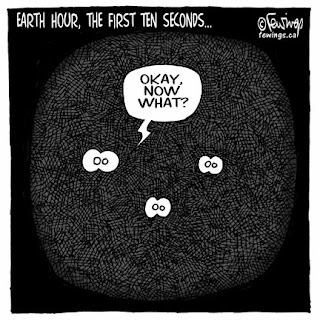 Maybe I shouldn't poke fun at the Earth Hour people. Doing something, even for an hour, might "raise some awareness" and give people a pause to think about their lifestyle choices the other 8,759 hours each year. Unfortunately, a "lifestyle change" that lasts one hour a year will not warm or cool the planet... of that I am confident. (Even if everybody opened their refrigerator door for one hour!)

I guess I'm a little skeptical because on the surface it seems like one more opportunity for the posers to step up on the stage.
Posted by Bikeboy at 4:58 PM