I was riding up the street yesterday - a street with a nice wide sidewalk alongside.

Three youths who appeared to be high school age were walking in the same direction, one on the sidewalk and the other two in the gutter pan. (I'm not sure why all three weren't on the sidewalk; there was plenty of width.) The two in the street were slowly drifting away from the sidewalk, and farther out into the street.

By the time I overtook them, the two youths in the street were almost halfway between the sidewalk and the center stripe. And I determined what had their undivided attention. All three were staring intently at their handheld digital devices, and punching the buttons.

I responded in what seemed like the appropriate way, with a loud "MOOOOOOOOOOOOOO!" (A confession: when I encounter cows in the road and am by myself, I do the same thing. It's a greeting.)

They looked up momentarily, saw where they were, and meandered bovine-like back toward the sidewalk, still concentrating on their handhelds.

At least they were on foot, and therefore not posing much danger to anybody but themselves.

Unlike the conductor of the ill-fated commuter train in Los Angeles last week.

And unlike motorists, whose text-messaging behavior is arguably more hazardous than that of chemically-impaired drivers. (See article HERE.) Half of all drivers 18-24 in the UK admit to texting-while-driving. 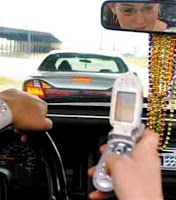 I'd guess the numbers are similar this side of the Pond. ("Grownups" don't seem to exercise any better judgment, although I'm sure they fancy themselves as much more responsible than kids when they're texting-while-driving.)

As a road-going bicyclist, my biggest fear is that I'll be victimized by a distracted or impaired driver.

I can ride legally and predictably, and be in the right place on the roadway. I can try to be highly visible. I can be watching out - riding defensively. (Including regular glances at my omnipresent helmet rear-view mirror.) But I can't fully compensate for the bad behavior of a driver who has chosen to impair himself, whether it be through chemical intake or total lack of attention to his driving.

I'd much rather deal with cows in the road!
Posted by Bikeboy at 10:18 AM

Reading this cracked me up. I am just as disturbed by people sending text messages while driving, cycling, or even walking. They can be a real danger. But I love that you mooed at those pedestrians. I have been known to moo at cows, horses, turkeys, rabbits, and even rednecks on some of my rides.

Yes it is very annoying.
Incidently, my only bike wreck in recent memory happened when I answered my phone while riding.

I damn near killed a cyclist at the intersection of 8th and Hays about a month ago ago who was riding at night, wearing dark clothes, no lights, talking on a cell phone and running a red light.

Fortunately for him I was driving my company car - which stops on a dime - and not my '72 VW Bus - which doesn't.

I like "Mooo"; but I tend to ask blithe cyclists and jaywalkers - brusquely: "Why don't you just eat a gun and get it over with"?!