Caltrops are antipersonnel weapons, with sharp points arranged so that one is always pointing skyward from a stable base. According to the Wikipedia, back in the day (as early as 331 BC), they were used to slow down the advance of human troops as well as horses, camels, and war elephants. In more modern times, their use was expanded to 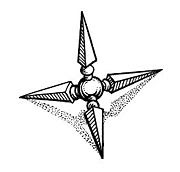 The Wikipedia goes on to mention "the plant Tribulus terrestris, whose spiked seed case can also injure feet and puncture tires."

Yep, my friends. Goathead Season is once again upon us. The vines are at their peak, and the seeds are getting crispy. (I don't know where that fancy name came from, but "tribulus" immediately makes me think of "tribulation - distress or suffering resulting from oppression or persecution.") 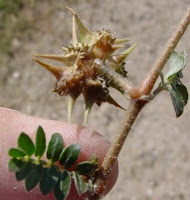 be totally discouraging for bike riders. I average about 25 flat tires a year, and 20 or so are goatheads. I personally know people who have given up regular bike riding as a direct result of surrendering to the goatheads.

"My latest pet peeve is goatheads, or rather, property owners being too lazy to get rid of them.
"I ride to school every morning with my kid and we try to keep to the sidewalk. One property had a 20 foot long section of goatheads so we were forced into the street. As you may know, eventually goatheads make their way out into the street too. After fixing several flats, I took matters into my own hands, went over there with a long-handled floor scraper and scraped the sidewalk cracks from which they were growing. I threw the large mat of offensive pricks onto the property's driveway, where they still remain 2 weeks later. It's a vacant small office, not a home."

I had a small goathead infestation going at a far corner of my lawn (next to the street... of course!), earlier this year. I have no idea where they came from, but they will not be growing on ground I manage! I took the garbage can out and carefully pulled maybe 20 small plants (before they had mature seeds, thankfully) and canned 'em. Then I canned all the seeds I could find. (In years past, I used to patrol several right-of-ways along the roads between home and school. Kids' bike tires are definitely goathead magnets.)

My friend Tara was telling me she pulled and canned several big plants, then used her shop-vac to vacuum up the seeds. (If you don't get the seeds, the plants will be back the next spring, if not sooner.)

Boisecynic's excellent advice: "To all you cyclists out there who hate goatheads, you can call the Ada County noxious weed department at 577-4646. They have the authority to force property owners to abate the nuisance, as goatheads are on the State's noxious weed list. They will also take care of goatheads in public rights-of-way. We all pay for this service in our property taxes..."

I've never called the Weed Hotline. (I've thought about it.) I will give it a try and report back.

How about this: http://goatheads.com/ He seems to be on some sort of crusade, too. Val

Yeah, I mentioned the goatheads.com guy in my "Bike Rider's Burden" comments. I don't know how much he rides, but he's got a business enterprise going, selling goathead-eating weevils.

My solid rubber innertubes can be a mother; but I enjoy Goat Head impunity as I tear through the streets and alleys of the North End.