In 1986, I was a working-class guy, six years into marriage to a wonderful bride, and with two young kids - another on the way.  We lived on the (Boise) Bench.  Up 'til '85, I worked just a couple blocks from home.  I walked to work - quite often I even walked home for lunch.  But then I changed jobs - the new destination was downtown.  With one car between us, suddenly we were competing for the wheels.  Occasionally I drove to work; more often I took the bus, or Robin dropped me off and kept the car.

Betty, a friend at the office, rode a bicycle... and she lived twice as far away as me!  Betty was always cheerful and energetic... and was an enthusiastic proponent of bicycles-as-transportation.  Her steed was a pretty red Gitane road bike; she had a choice parking spot in the back hallway.  (That was another thing about driving to work... sitting in traffic, finding a parking spot, etc., etc.)  Betty really put me to thinkin'.

I'd ridden bikes - a lot! - as a kid.  And we inherited his-n-hers Schwinn "ten speeds" from my parents, who no longer used them.  But I wasn't excited about fixing up that old rusty Schwinn; I decided I needed a new bike as incentive.  I announced my plans to Robin.  She was skeptical about my bicycling to work, and was confident I was just negotiating for some "new toy money" from our very limited budget.  But I forged ahead... ultimately deciding on something that was new-fangled in '86 - a MOUNTAIN BIKE.  Nobody was sure whether they'd catch on.

But - it caught on with me!  That's what matters.  That bicycle became my primary mode of transportation.  Riding up "Mount Protest Road" seemed like a daunting task at the time!  But I got to coast down in the morning, and the rest of my route was pretty flat.

I immediately started appreciating the benefits - no traffic headaches... no parking headaches... no pumping gas!  But as the days got longer and the weather nicer, my route started varying (at least in the afternoon, when I wasn't pressed for time).  Bicycling proved itself as recreation and exercise, besides transportation.

In 1986, I ended up riding 2195 miles.  (I spent $80 or so extra for another new-on-the-market gizmo - a Cateye bike computer.  Being a numbers geek, and being somewhat motivated by that distance, it was money well spent.)  1986 was the last year I bicycled less than 4000 miles, as the bike became my primary transportation.  (I still occasionally rode the bus, or a motorcycle, or caught a ride, but 95% of my commuting was on the bike - year 'round.)

The last day I drove a car to work was in September, 1997.  I retired in 2019 - twenty-one years later, and exactly one year before the pandemic.

I still average about 350 bicycle days per year.  I still ride about 5000 miles per year, and have no intention of letting up.  300K seems pretty unlikely, but I'd like to shoot for 250,000 miles, 9 or 10 years from now.  (My friend David Williams mentioned that the moon is about 238,000 miles away.  Hmmm....)  Back during the employment years, probably 2/3 of my miles were transportation, 1/3 pleasure/exercise/recreation.  Those numbers are reversed now... the majority of my miles are just because I love to ride!  The best rides these days, are rides with my grandkids.  (Oh, and 2022 Steve is considerably slower than 1986 Steve, despite all that "training"!!)

The number of HOURS spent riding over 36 years?  That is a sobering thought!  But consider how many hours a lot of people are sitting in traffic over the course of a year.  Consider how many gas station fill-ups I've skipped.  And - most of that bicycle time is combined transportation/recreation/exercise!  Win-win-win!

NOTE: This is a BICYCLE - you know, the kind you pedal, not the kind that you just sit on and a motor does the work.  Most of the satisfaction of this accomplishment is the result of the physical effort that was involved!

There IS a down-side.  There's some effort involved (if you consider that a "down-side").  Cold and wet weather... really HOT weather... and slippery road conditions... wind... an unpleasant encounter with another roadway user, can take the gilt off the lily.  Probably a half-dozen times I got home from work... took my shoes off... and poured rainwater out of 'em.  I've had a few crashes - some painful! - fortunately never involving a serious injury.  But the wonderful days far outnumber the marginal days.

One thought that gives me comfort: Lots of old geezers get to a certain age, and their kids intervene and take the car keys.  For me, that won't be too painful.  (Now if they lock my bike up and hide the key... THAT might be a problem!)

If you are thinking about riding a bike to work - START TODAY! 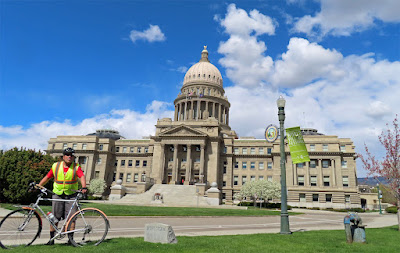 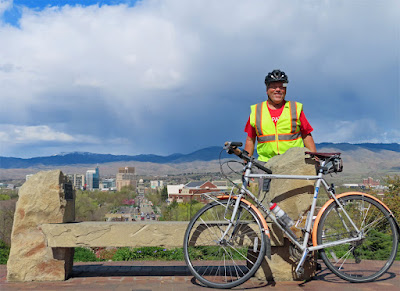 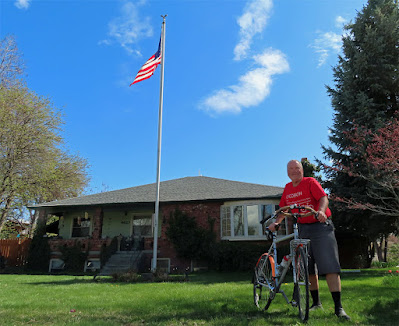 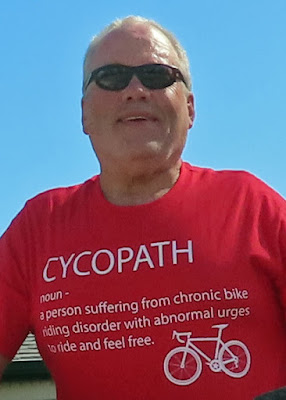