Return of a River Crossing

Remember the Winter of '16-17?  It was a doozie!  Snowfall at levels almost unheard of in these parts, accompanied by flooding for months, and property damage.  One of the casualties was the South Plantation Island Bridge, an important river crossing on the Boise Greenbelt (right behind what was once Les Bois Park).  The pathway on the island, as well as the footings for the bridge, were damaged by high water, and they decided to remove the bridge rather than risking losing it down the river channel.

Since then (almost 2 years!), there's been a virtual dead end on the north side, and only a place to stop and look across forlornly on the south side.  Here's what the view looked like earlier today: 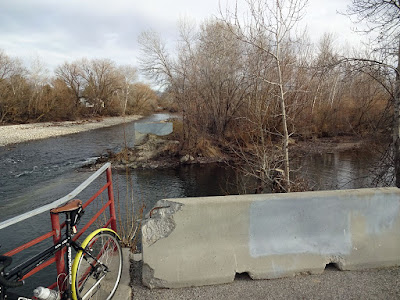 Last summer, the Idaho Foundation for Parks and Lands (who manage the island) announced a fundraising effort.  They needed to raise $75,000 in matching funds, to get fed money to replace the bridge.

I commented on the Boise Guardian website, about pathway users needing to pony up and hold a bake sale.  Obviously we maintain second-class citizen status; taxpayer funds are used when a road breaks and needs fixin'.  But much to their credit, local private citizens rose to the occasion and raised the money!

So... I've been wondering when we could expect to see bridge restoration efforts get underway.  (They need to do it over the winter, when water levels are low.)  I emailed the Foundation to inquire, and got a nice reply from Jan Johns, the Foundation director:

Thanks for your inquiry.  We have good news as of yesterday.  All our permits have been approved and we received them in the mail yesterday.  We are now going out to bid immediately.  I will be sending out an update this afternoon and update the website as well.

It has been a longer process than expected to get the permits approved due to holidays and government shutdown.  But hallelujah we are finally moving forward.  The engineers anticipate it will take a couple of weeks to get the work done once we get going. We will be keeping our fingers crossed that all the work goes smoothly.  Thanks again for your concern.

Great news, indeed!  That's a significant river crossing for the local bike/pedestrian community.  And a bridge is better than what was suggested by a commenter over at the Guardian: I’m surprised the government folks haven’t touted the benefits of swimming across the river as a viable and healthy alternative.