Are you a college football fan? If so, it was a historic and recently-ended season.

Once our beloved Broncos were out of the picture, I was cheering for the 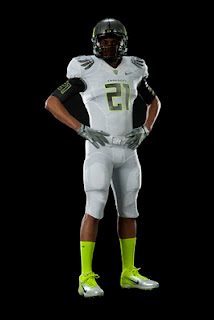 Oregon Ducks. And was disappointed when they lost the championship game. (But not by much... it was a good game, particularly if you like world-class defense.)

Of course, Oregon is famous (?) for their uniforms. They are at the opposite end of the spectrum from Penn State, with their "generic" look. If Oregon plays 13 games in a year, there are several uniforms they won't get to wear that year, if they wear a different one for each game. (That is largely because they're just down the road from Nike, and are "guinea pigs" of sorts.)

I seriously want some of those socks, like they were wearing in the championship game! They'd go nice with my hi-viz jacket and vest! And one of the beanies would be nice, too... in that same color, of course. I could wear it under my brain-bucket, just like the football players.