Happy Earth Day, everybody! Do something nice for our Mother - I'd suggest flowers. (She likes chocolate, but she's getting pretty, uh, um... ahem... round...)

The organizers of the first Earth Day, 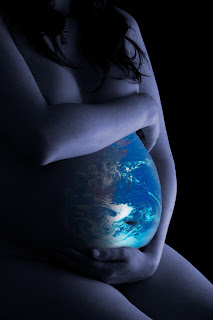 back in 1970, were skeptical that our planet would still be hosting life forms by 40 years later. (And they're probably taking credit, since we made it after all.)

Kenneth Watt, professor of zoology at UC Davis: "... crude oil will be gone in between 24 and 32 years ... at the moment when I say that we’re moving into an ice age, most people say, 'Hah. That types him – you know, he’s nuts.' But ten years from now, things will be weird enough that people will be saying, 'By God, so that’s why it’s snowing in May!'"

Perhaps Mother Earth is more resilient than we give her credit for.

But don't get me wrong - I'm TOTALLY in favor of minimizing our impact on the planet. Ideally it should be something we keep in mind 365 days, and not just one, each year. I'm trying to tread lightly.

About the illustration: Hopefully you're not offended. I did a web search for pictures of "Mother Earth," and this one was on the AmericanNeoPaganism website.
Posted by Bikeboy at 8:57 AM

How about this early Earth Day celebration. http://www.sfgate.com/cgi-bin/article.cgi?f=/c/a/2010/04/20/DDG21BST18.DTL&type=entertainment

I can remember that Mavericks sold for $1995. (Probably the only reason they sold at all!) Of course, tuition for a semester at San Jose State was probably $150 back then, too.

In the nation's capitol, some rocket surgeon scheduled "Bring Your Kid to Work Day" to coincide with Earth Day. The train was filled with all the regulars, plus folks doing their bit once a year to stop Global Warming<&trade>, plus all their kids. The ride was standing room only, which was probably frustrating enough for the newcomers to discourage them from ever riding the train again... Until next Earth Day, that is.

I was back on the bike today, though, enjoying the blooming jasmine, songbirds, a couple foxes, probably three dozen bunnies (Which the foxes were no doubt enjoying as well) and a fantastic sunrise.