If you're making your vacation plans that include bicycle travel... USA Today has an interesting article (HERE) listing some of the "best urban bike paths across the USA."

From the article:
- Many on our list are important commuting arteries that give cyclists direct access to business districts while avoiding city traffic and making few street crossings.
- Almost all are paved, and those that aren't are well surfaced with finely crushed rock and graded for ease of riding.
- (Most importantly) a great bike path is separate from traffic for all or most of its length.
- They also happen to be exceptionally beautiful. All but three of these bike paths run alongside a body of water, and almost all are bounded by parkland, giving cyclists a decidedly non-urban respite from the stress of city riding.
- We also looked at other factors: Does the path offer exceptional views of, and access to, the city? Is it good for recreational riders and tourists? Does the city take pride in it?

I'd say that the Boise Valley Greenbelt qualifies in every category. As the days get hotter, and the pavement gets correspondingly hotter, how does it affect rolling resistance?

1) On the one hand, we've all seen water droplets "sizzle" across a hot skillet.  Do bicycle tires "sizzle" on the pavement surface in similar fashion?  Which would decrease rolling resistance, one would think.

2) Or, on the other hand, we've all seen how a cube of butter melts on a hot skillet, increasing the "contact patch" and becoming generally less wieldy.  (Surely melted butter has more "resistance" than a solid stick of butter!)

So far, my research has been based solely on personal observation.  And even after many years, the results are "inconclusive."  I will continue to observe.  Input from other "guinea pigs" would be welcomed!

(I'll be disappointed if I've spent so much time and effort, and somebody tells me "there's an app for that," available on your smart phone!)
(-;
Posted by Bikeboy at 12:15 PM 2 comments:

Are Boise parks getting bike-UNfriendly?

This is a letter I sent to Boise's Mayor, City Council, and Parks Department.

Below are two photos I recently snapped, along bike/pedestrian paths in our area.  One was taken in Boise – a city desiring to be known for being "bike friendly," and succeeding at that effort in many ways.  (What with our ACHD "Bronze Level" recognition by the Bike League, etc.)  The other was taken in Garden City – a community that has a reputation for being somewhat stand-offish and "unfriendly" when it comes to bicycles on public pathways.  See if you can guess which sign is in which city: 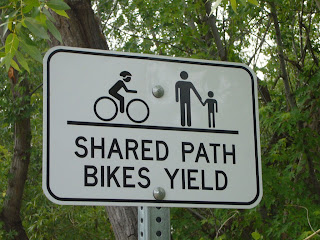 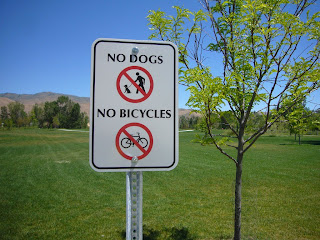 If you guessed that "bikes yield" in Boise and "no bicycles" in Garden City, you'd be WRONG!  There aren't many "no bicycles" signs in Boise, but I've seen them in two recent development projects – a disturbing trend?  The photo was taken in the new Williams Park, at the east end of town, and there are also "no bicycles" signs at the Hyatt Hidden Lakes Reserve at the west end of town.  In fact, the Hyatt "rules" state, "Dogs, bicycles and all water activities are prohibited in the preserve."

Why the antipathy towards bicycles?  Is there something inherently destructive or undesirable about bicycles and their riders?  I can understand a rule prohibiting dogs – at least unleashed dogs.  And a prohibition on water "activities" in wetland habitat areas certainly makes sense.  But why a blanket prohibition on bicycles??

As a lifelong Boise resident and cycling advocate, I'm unhappy that cyclists are "presumed guilty with no opportunity to demonstrate innocence."

Are there some irresponsible cyclists that crowd our paths?  Absolutely!  But you don't prohibit all motorists from using the roads because a few of them drive drunk!  (And I might add, there are plenty of irresponsible pedestrians, roller-bladers, dog-walkers, etc. crowding the paths as well.)

On many days I ride through Williams Park, or ride past the Hyatt Reserve, without seeing another soul.  Why do you arbitrarily prohibit me from trying a different path?  I've never run over a duck or goose in my life!  (I ran over a cat once, with my bicycle on a city street, but it was clearly the cat's fault!)  If my granddaughter and I are riding the Greenbelt in Williams Park, and want to use the restroom or fill water bottles, we have to get off and walk our bikes down an often-empty sidewalk.  Makes NO sense!

Why not use the new facilities as an educational opportunity?  Frankly, I quite like those Garden City "Shared Path / Bikes Yield" signs – you should post them all up and down the Greenbelt!  Maybe with a "Speed Limit 15mph" in addition.

I do most of my riding on city streets.  On those occasions when I take to the Greenbelt, I sincerely try to follow the rules, and resent cyclists who either are unaware of the rules or have no intention of following them.  But don't penalize all of us on account of the scofflaws!

I got a very informative email response from an employee of the Parks & Recreation department, who was involved in the development of both facilities mentioned.

I was informed that both of those facilities had pre-existing conditions on them, that excluded bicycles and certain other user categories.   The city had no choice in the matter.  In the case of the Hyatt Reserve, "One of the main focuses was to minimize the disturbance to the water fowl and wildlife."  I take minor issue with that... I replied, "I have ongoing confusion about how a bicycle rolling along a path (at a reasonable speed) could possibly create any more "disturbance" to wildlife than an equivalent number of pedestrians crunching along the path."

But the response is encouraging - the City hasn't adopted a policy of excluding bicyclists from newly-developed facilities, overall.
Posted by Bikeboy at 6:59 PM 3 comments:

We are in the midst of an unprecedented hot-weather spell, all over the intermountain west. Boise is supposed to have 5 or 6 100-plus degree days, before it settles back to more normal highs in the low 90s.  (It's not too unusual to have a week of 100-plus days in the summer... but it's usually in late July or early August.)

Does the extra 10 degrees make a difference? I'd say it definitely makes some difference. Cooling systems are put to the test on such days. We have a pet bunny - she lays still against a bottle full of thawing water, taking shallow breaths. Cars overheat. Our swamp cooler has been running nonstop for 3 or 4 days; sometimes I lie awake at night, worrying about it stopping. (There are a couple weeks each summer where it can't quite keep up, but most of the time it's adequate and significantly cheaper to operate than refrigerated air conditioning.)

Likewise, the human cooling system is put through its paces. It's really quite the amazing system. Blood circulates to the skin surface where it flows through capillaries. When it gets hot we sweat, and the evaporation cools the skin's surface. As the cooled-down blood continues its journey, it brings merciful relief to other components that would otherwise overheat. If it's not keeping up, the heart pumps harder, trying to circulate the blood a but faster. It's critical to stay hydrated, because that evaporating water is a very critical component.

On Saturday mid-afternoon I went on an errand-running ride of 80 or 90 minutes. I drank my water and filled it and drank it again... was starting to get quite uncomfortable. I stopped at a city park, drenched my t-shirt, poured a bottle of cool water over my head, drank a bottle's worth of water and refilled it... it was amazing how much better I felt as I rode away!

(As long as I have plenty of water to pour into the radiator, I'm good at 100+ degrees. Death Valley is pushing up on 130 degrees... that might be a little TOO much, for more than a few minutes.)

Stay hydrated, my friends!
Posted by Bikeboy at 4:01 PM 1 comment: