This is probably nothing to get startled about... but I've noticed that for the last month or so, we seem to be experiencing Global Cooling.  At least at this latitude.  But - if memory serves, the same thing was happening about this same time last year.  (Six months from now, we'll be in the throes of Global Warming once again.)

I enjoy a bit of personal amusement in the autumn.  Being quite "weather-extreme tolerant" (largely as a result of many years of cycling in widely-varying climatic conditions), it amuses me when I'm still in shirt-sleeves, and cross paths with cyclists who are bundled up like they're headed for Antarctica!  You know - thick hooded goose-down parka, heavy mittens, scarf across face, etc.  When it's 50 degrees I always want to ask, "What are you going to do when it gets cold?!"

Also, the "bike room" parking at the office clears out, this time of year.  In the summer, there might be 30 or 35 bikes parked in there... now there are 3 or 4, and a couple look to have been abandoned.  Another fairly regular year-round cyclist observed, "Cold weather has a way of weeding out the weak and infirm."  Among the general population and among the cycling population!

Longer term, as I think about it I detect another pattern.  20 years ago I would take the most direct route, the majority of the time.  I was focused on transportation efficiency on the bike... wanting to select the fastest way from Point A to Point B.  Nowadays I'll frequently diverge more, sacrificing a minute or two for a more aesthetically-pleasing ride.

Almost every weekday, I ride down a quarter-mile stretch of 4-lane road (Americana Boulevard), where the downhill slope makes it practical to "take the lane."  At the bottom, I can peel off to a bike path through the park.  Doing so definitely adds distance and time to my ride... but it is always such a pleasant change of atmosphere, to put the motor traffic noise behind me!  The extra minute or two is a small price to pay.  (And, in all honesty, my speed is 3mph slower than it was 20 years ago, so rapid transit is less of a factor in any case.)
Posted by Bikeboy at 8:15 PM 1 comment:

For several years, I've seen conceptualized honeycomb-folding helmet proposals.  But this one looks like it's closer to reality... and pretty cool, in my opinion.  If they can build 'em for a selling price of $5 like they hope, I bet it will be a winner. 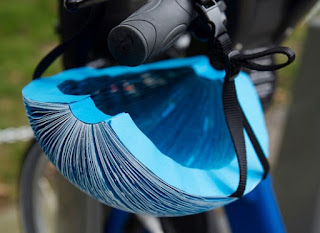 It has won the 2016 James Dyson Award.  I'd say it's way closer to the "function" end of the form-function scale, than those crazy-looking vacuum cleaners that are apparently the brainchild of Mr. Dyson.  (No offense intended; I've never used one of those cleaners, but they look to me like they're way more "form."  And I do know they're expensive and there's a huge market for the refurbished ones, which to me calls into question their durability.)  And those Dyson bladeless fans?  Now there's a solution looking for a problem!  But I digress...

More info on the foldable helmet HERE.
Posted by Bikeboy at 6:03 PM No comments:

"Our long national nightmare is over."
- Gerald R. Ford

Way back in January, 2015, I lamented that a stretch of the Greenbelt would be closing for an extended period, during construction of a new city park on the north side of the Boise River.

Happy day!  That extended period is over, almost two years later.  Esther Simplot Park is open, along with the Greenbelt through the area.  (The "chain link fence tree" is gone forever.)

I rode the new path on Halloween... was pretty much alone.  I rode it again on 11/3 and snapped a few photos.  I took granddaughter Bonnie back yesterday, 11/5... it was jam-packed!  I can't fault my fellowcitizens for wanting to visit it on a beautiful autumn afternoon, but the quality of visits will be better when it doesn't have Disneyland-size crowds!  Visitors were enjoying the waterways... the play facilities (not traditional playgrounds, but rock mountains to climb on, etc.), the lovely variety of pathways.  Of course, some visitors were doing what they do no matter where they are... lurching about, staring at their "smart phones."

Some of these photos were taken in the new park, others were snapped along the once-again-contiguous north stretch of the Greenbelt, near the new park.  (And I see I better adjust the straps on Bonnie's brain-bucket... it's positioned too far back.) 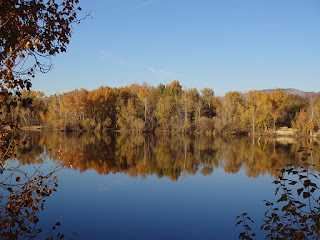 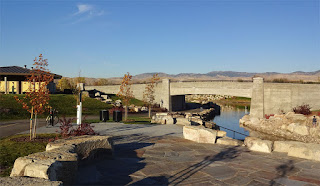 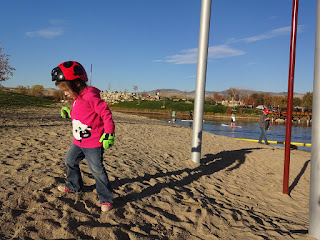 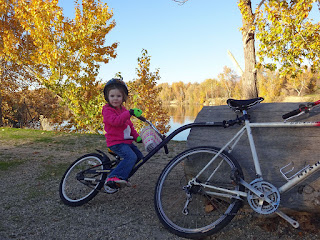 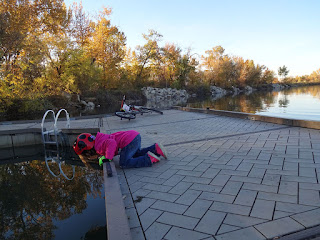 Posted by Bikeboy at 8:21 AM No comments: