This may be of interest to Boise cyclists.  The Ada County Highway District is conducting a survey and soliciting citizen comments about the possibility of adding bike lanes to the east end of Emerald Street (from Orchard east to Latah), and Americana down the hill to the entrances of Ann Morrison and Kathryn Albertson Parks.

To find the survey, go to the ACHD Project Page, and click on Emerald Street & Americana Boulevard... in the "Roadways" section - that project page is HERE.

Some observations... since I've ridden that corridor many times each week for years - on a bicycle - I felt qualified to comment.
- Being a pragmatist, I appreciate the fact that those streets get pretty busy at Rush Hour.  I don't relish the idea of turning four traffic lanes into two, which is one of the scenarios.
- Emerald can get a little dicey when traffic is heavy, but
- the lanes are pretty wide on Americana.  Maybe they could add a bike lane on both sides.
- Or perhaps they'd do a bike lane on the uphill side where there can be a wide disparity between bike speeds and car speeds, but let 'em share a lane on the downhill side.

My recommendation on the survey was to mark the outside lanes with prominent "sharrows" to remind motorists that they might be sharing the lane with brothers and sisters on bikes, but otherwise leave things as they are.  I also noted that it can be awkward to ride up the hill on Americana, and then somehow get into the left lane to turn south on Latah, but I'm not enough of a traffic genius to know how to economically make it better.
Posted by Bikeboy at 5:50 PM 2 comments:

Well, it was bound to happen eventually.

I had a weather-related crash.

Background info - we got about 8 inches of snow Thursday night and during the day Friday.  They reported it's the most snow on the ground in Boise since 2002, so it's unusual.  And since then, it's remained well below freezing, so the precipitation has mostly remained on the ground as well, in various forms.

I've soldiered on, riding my bicycle every day... the craigslist wider-tire beater bike that doubles as my baby bike.

Friday I still had the smooth treads on when I rode to work, and that afternoon I was sliding around like I was on water skis!  I switched over to the "knobby" tires Friday night, and it's been much better.  I rode to nearby destinations on Saturday and Sunday.  Monday I had the day off and no destinations, so I rode a couple miles at the park across the street.  (At least a mile-and-a-half was in the tennis courts, that had mostly "virgin" snow - I spent a half-hour or so making tire track patterns in that snow - fun!)

Yesterday I rode in to work again.  As always when traction is marginal, I try to stick to the side roads, bike paths, etc., and travel at a reasonable pace.  (Yeah, I know lots of people think the only reasonable bicycle pace is STOPPED, when the roads are slippery.  If I had a car, I'd probably drive instead... but I don't have a car.)  The morning ride was fine.  But I'm convinced it's always slipperier in the afternoon.  In the morning it seems like even the slipperiest places have "crystallized" a little on the surface.  By contrast, in the afternoon when the sun has been shining, they become glass smooth, and even have a liquid-lubricant surface.

It was on one of those zero-traction surfaces where I had my mishap.  It looked deceptively like it had a bit of sand and gravel... but not enough to provide any traction.  There was just enough of a sideways slope that... ZIP!... my wheels were out from under me without a bit of warning and POW!  I bounced off that slippery surface sideways.

There were cars approaching from both directions, but with plenty of distance to slow down until I dragged my sorry carcass out of the way.  The reality... I had the scene cleared in probably 20 or 30 seconds, but it always seems longer.  The guy approaching "head on" rolled down his window and sympathetically asked if I was okay.  I was.

Other than de-chaining, my bicycle was fine.  And as it turns out, I think I'm fine, too.  The true test is the next morning when the alarm goes off and you have to get out of bed.  That's when you find out if you've wrenched a muscle or bruised a joint... something that will hurt for a week or a month.  But I didn't feel too bad.  Just the usual morning slow start.  Didn't even take an aspirin.

I thought about taking the bus.  But when you get bucked off, you have to get back on that pony.  So I rode.  Did fine on the morning commute... and I have high expectations for the afternoon commute as well.
Posted by Bikeboy at 10:37 AM 3 comments:

What a difference a day makes!  Twenty-four little hours...

The forecasters and their tools have become much better in my lifetime.  For most of the (cold but sunny) week, they've been telling us to expect a couple inches of snow today.  As I bicycled into the office this morning, I could feel a few little flakes spittin'.  At goin' home time, there was an accumulation of an inch or two, just like the man said.

Office colleagues, as always, were horrified at the notion of bicycling in the snow.  "You're riding your bike?!!?"  And as always, I tried to reassure them that as long as the other roadway users were driving appropriately for the conditions, I'd be just fine.  In fact... I detoured several miles out of the most direct path to enjoy the unique treat that is riding in freshly-fallen snow.

Once you get away from the traffic noise, the quiet is something special.  The snow acts as a sound-deadener.  The bike tires make a slight crunching sound... off in the distance comes the occasional enthusiastic honking of a dozen or fifty Canada geese.  (I wish I understood goose - is it happy sound?  Or is it unhappy?  Are they encouraging one another, or complaining to one another?)  The occasional rippling of river rapids.  At one point a mommy came jogging by, with a pretty little princess pulled behind on a sled.  The princess was obviously very happy. 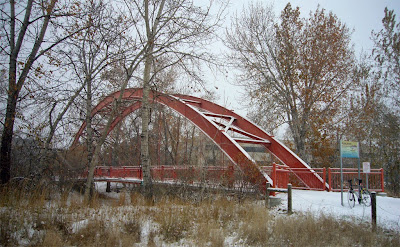 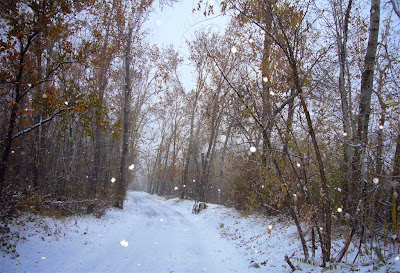 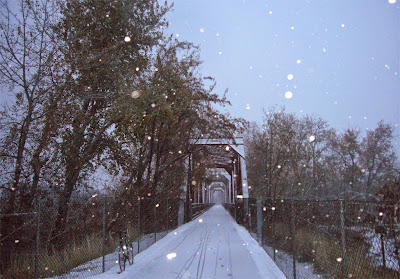 Trade this, for the climate-controlled comfort of a "cage"?  I think not!!

(NOTE!  I try to acknowledge and respect the damage that a 4000-pound steel missile could inflict on me!  The first snow day is always a godsend for the body shops, and if they can smash and crash one another, imagine the squish they could put on a soft-on-the-outside bike rider!  When it's slippery, I consciously avoid the heavily-traveled thoroughfares, choosing the protected bike/pedestrian facilities and side streets whenever they are available.)
Posted by Bikeboy at 7:46 PM 2 comments:

No!  Not what you wear under your bike shorts!

I find that I've lost some motivation to contribute frequently to this blog.  Probably because I've said all I have to say, and there's not a lot new in transportation cycling.  (Or if there is, it's apparently passing me by.)  I'd like to do a better job of "indexing" this blog, so visitors can more easily find specific information - or my spin on information - that's been previously posted.  That'll probably be a job for a frigid weekend, sometime over the winter.

On the local front, the weather has been ideal - and autumn is probably my favorite time to ride a bike in the Boise area.  So many people apparently hang 'em back up in the garage after Labor Day, so traffic is light.  The sky is often blue, and the trees start turning lovely colors.

I snapped this photo on Halloween, riding home after work.  (Actually two photos, merged together in a panorama.)  Looking out over Ann Morrison Park, downtown in the distance.

They've improved a couple stretches of the Greenbelt.

East of town, below Warm Springs Mesa, they improved some retaining walls, but the pathway appears unchanged.  (It might prevent dirt from washing across the pathway, during the occasional downpour.)

And downtown between approximately 16th Street and 23rd Street, they replaced another stretch of bumpy asphalt with concrete, and rerouted a couplel of ramps.  (I'm glad that one is done, because it was blocking my primary going-home route... over the railroad trestle and up to Garden Street.)

West of town... you can now ride all the way from Glenwood to Eagle Road on the south bank of the river... without getting your feet wet!  (I forded that canal a couple times over the summer, with bicycle over head.)  The feud between the city and the subdivision was resolved and they replaced a missing bridge over a drainage canal.  Twice this month already, I've ridden that stretch, and then crossed the river on Eagle Road, and returned to Riverside Village on the north bank of the river.  (Obviously, once a bike rider gets to Riverside Village, he's forced onto the streets, because the bike path becomes a no-bikes "nature trail" for a half mile or so.  A lasting monument to selfish "provincialism" by Garden City, and spinelessness by the Idaho Attorney General's office.  But I've beat that dead horse enough over the years.)

(NOTE!  The "Eagle Road Loop" of the Greenbelt includes several sections of unpaved pathway!  Keep that in mind if you decide to give it a whirl.  I do okay on my semi-skinny (28mm) tires.  Super skinny tires might fare worse... 2-inch tires would be lovely!  I don't begrudge the dirt sections at all - they probably keep the Lance Armstrong wanna-bes away.  If it's your first time... take it easy.  There are a couple of "surprise" bends.  And factor in some time for getting lost-and-found, particularly on the north side, and wending your way through Riverside Village.)

On a personal note... over the weekend I hit 5000 bike miles for the year.  And went on another sweeet ride with granddaughter Bonnie, who's over 300 "bike passenger miles" for 2014.
Posted by Bikeboy at 6:49 PM 1 comment:

Fall back, schmall back!

I went to the Wikipedia to read up on Daylight Saving Time.  According to that source, the notion was originally floated by a guy from New Zealand, back in the late 19th Century.  And it says the "rationale" is that most people prefer a greater increase in daylight hours after the typical "nine-to-five" workday.

I can buy that - in fact, count me among them. So... why would we suddenly quit preferring daylight after 9-5, in Autumn when the days get shorter?

If anything, they should "fall forward" and "spring back," so we get that extra hour of precious daylight in the winter, when the days are shortest.

Starting Monday for a month or so, you'll get dressed in the morning and commute to work while the sun is up... big freakin' deal!  When you go home, maybe if you're lucky you can do a few minutes of outside stuff without artificial lighting.  By a month from now, it'll be dark all the time, except when you're at work.  (I'm describing the situation at roughly 43 degrees north latitude.  It varies.)  Oh goodness!  Just the thought give me Seasonal Affective Disorder!!

In any case, don't change the batteries in your smoke alarm on account of "falling back."  If your smoke alarm is anything like mine, it will start annoying you with incessant beeping when the battery is getting weak.  (Maybe Duracell is the powerful lobbying group that keeps DST alive.)

When I'm in charge, we'll have year-round DST... and "America the Beautiful" will be the National Anthem.