It's not uncommon at all to see a deer along the river banks, as one traverses the Greenbelt.  And any regular cyclist will attest that occasionally you find yourself slowly zig-zagging among the abundant Canada geese.  (For me it invokes the haunting final scene in the Hitchcock classic, The Birds, when Rod Taylor drives his Aston-Martin into the sunset, as millions of birds slowly clear a path for him.)

But a few wildlife viewing opportunities have been a little less common.

I've ridden the Greenbelt out to Eagle Road a couple times this spring.  And on the most recent trip, I saw several swans taking rest in the dredge ponds.  Beautiful!

And a bit farther downstream, it's nesting time for the cormorants... hundreds of 'em perched in the trees.

Even more uncommon in these parts is a giraffe viewing.  Which should convince even the most ardent global warming skeptic.  There was a time when giraffes were rarely spotted outside of Africa.  But Africa's too warm for 'em nowadays. 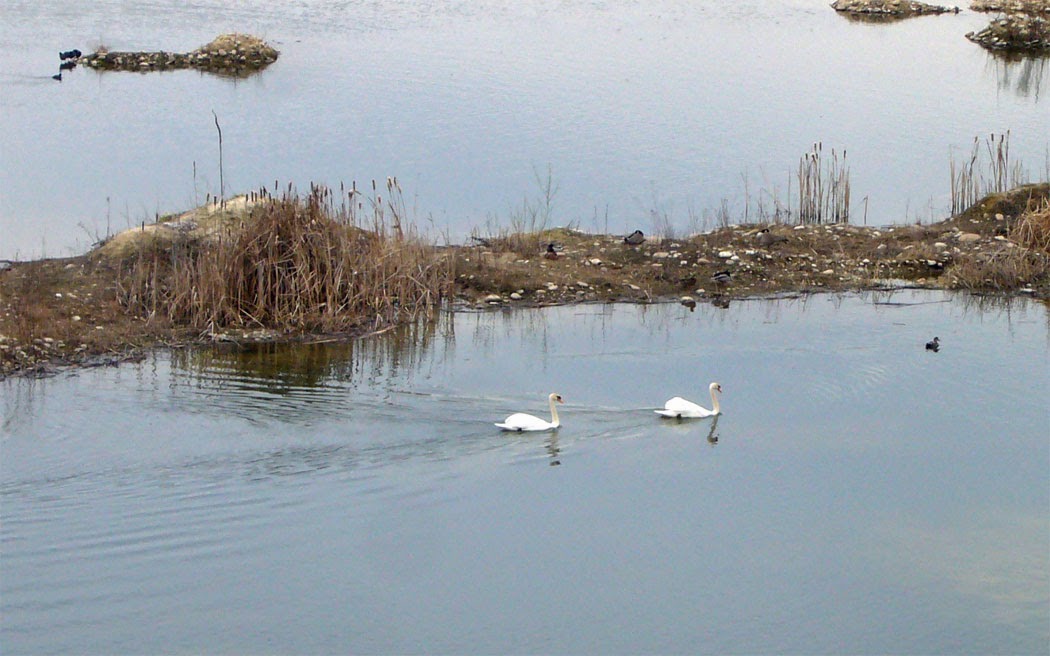 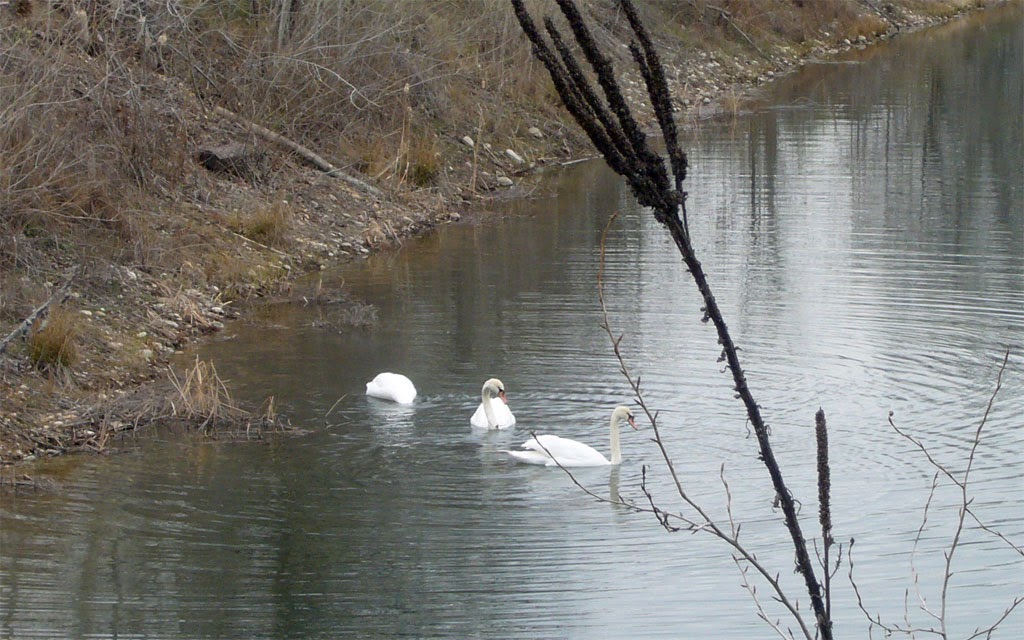 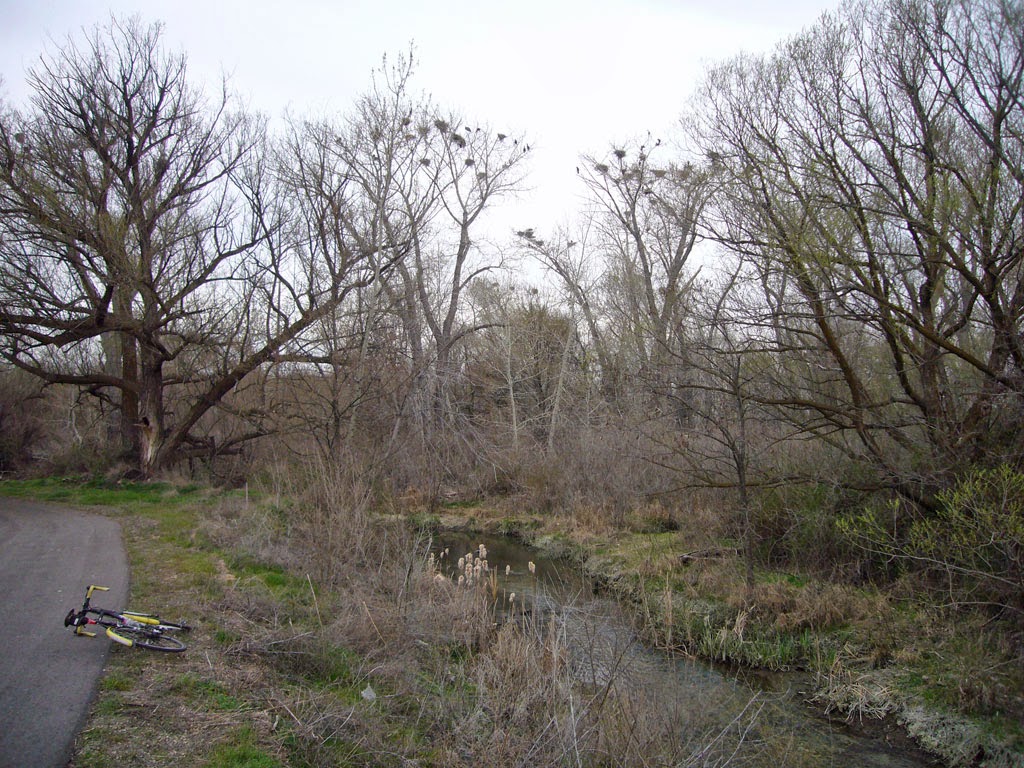 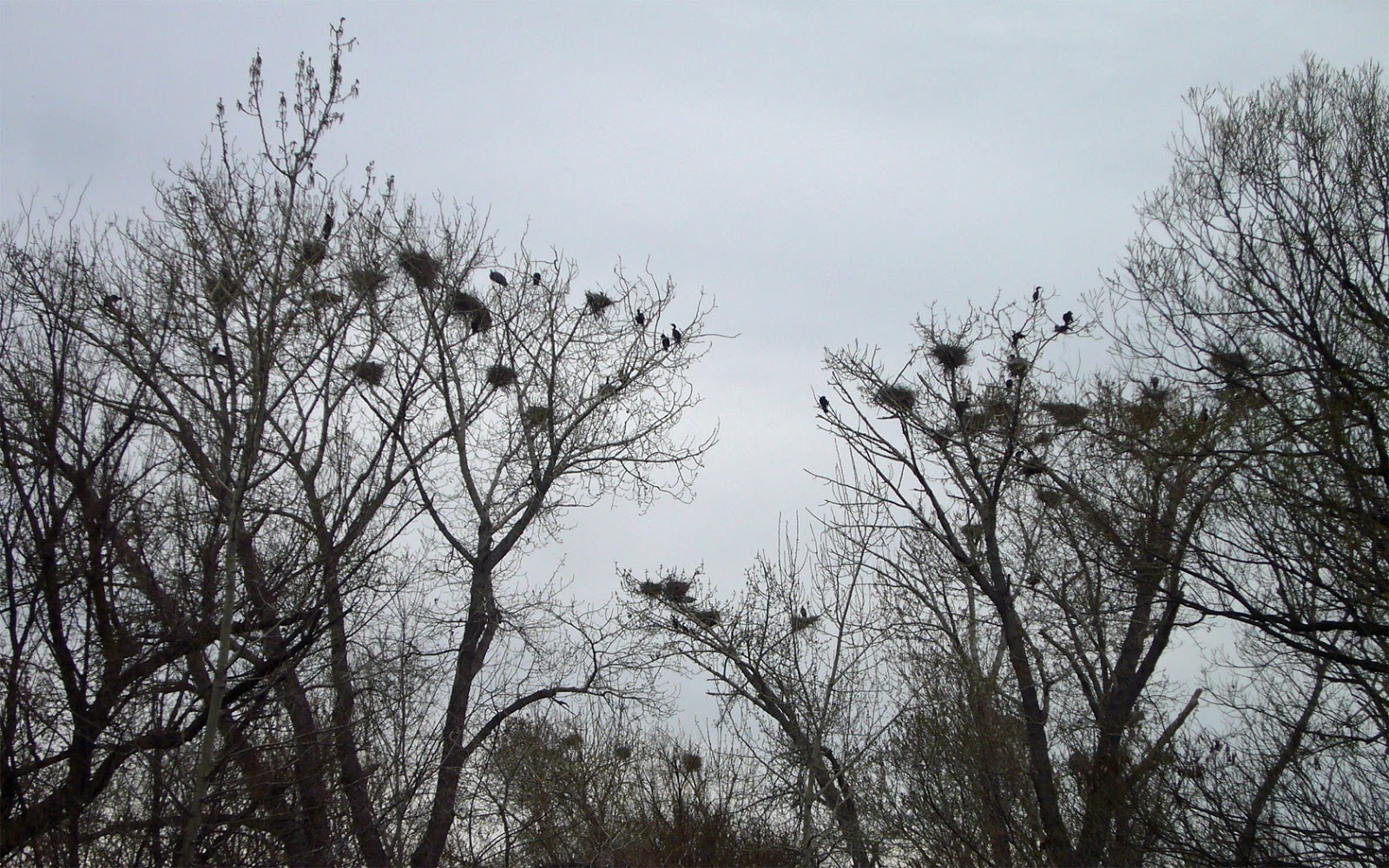 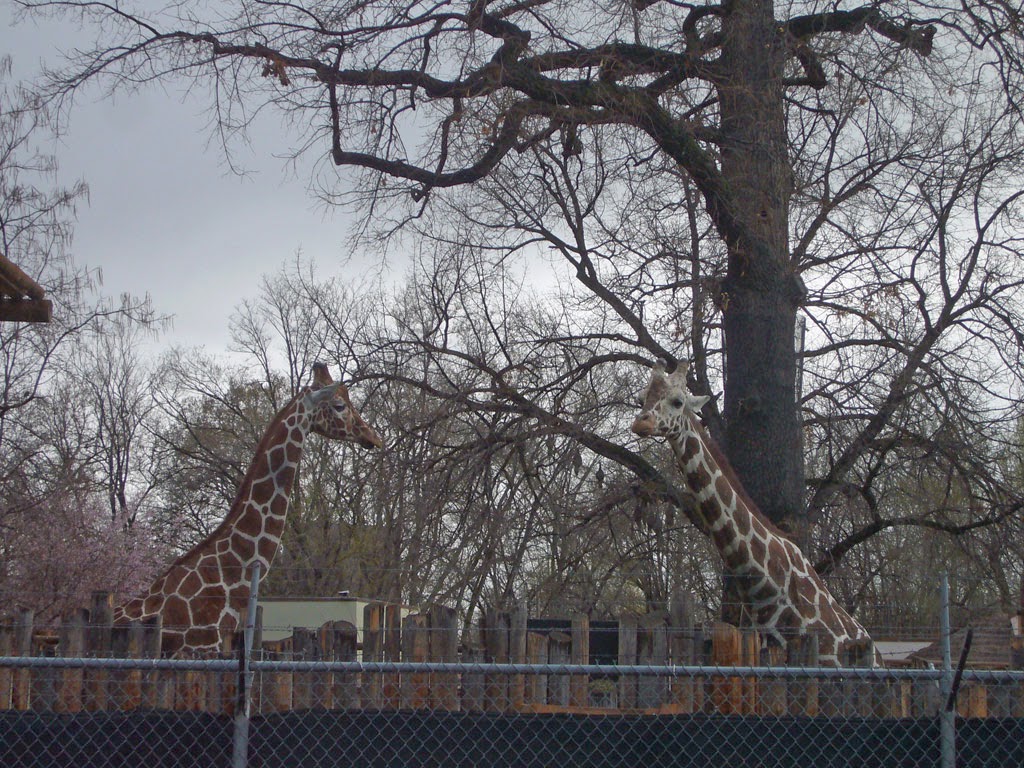 In most places in the USA, cyclists "have all of the rights and all of the duties applicable to the driver of any other vehicle" with few exceptions.  (Idaho statute)

(Obviously, it has to be acknowledged that the laws of physics trump the laws of the state... if your choice of riding location exposes you to irrational danger, being legal may not be much comfort if you're lying in the hospital or morgue.)

Some roadway users refuse to accept that cyclists have a right to be there.  And others - particularly, it seems, drivers of giant pickup trucks - seem to believe that the right to use the road is proportional to the size of the vehicle being operated.  This is obviously something that I often observe - read HERE, HERE, HERE, HERE, and HERE.

(Spotted in a neighborhood I occasionally drive through.)
Posted by Bikeboy at 10:04 AM No comments:

My granddaughter Bonnie turned 1 end of February... I'm thinking she and I are going to enjoy some nice bicycle adventures over the next few months.

We went on our longest ride yet a couple days ago - 11+ miles.  Since I can't see her face except for occasionally when she looks up at me, I have to go on sounds... but the sounds are uniformly happy sounds.  Our long ride was down to the greenbelt; she seemed to really enjoy the sights and sounds of the water.  We also engaged some Canada geese in a low-speed chase (them waddling, we following) across the grass.

On the way home, we swung by the Boise Depot.  If you haven't been there recently, you need to check out the roundabout at the northwest entrance; it's been finished in beautiful style by some mosaic artists... spectacular! 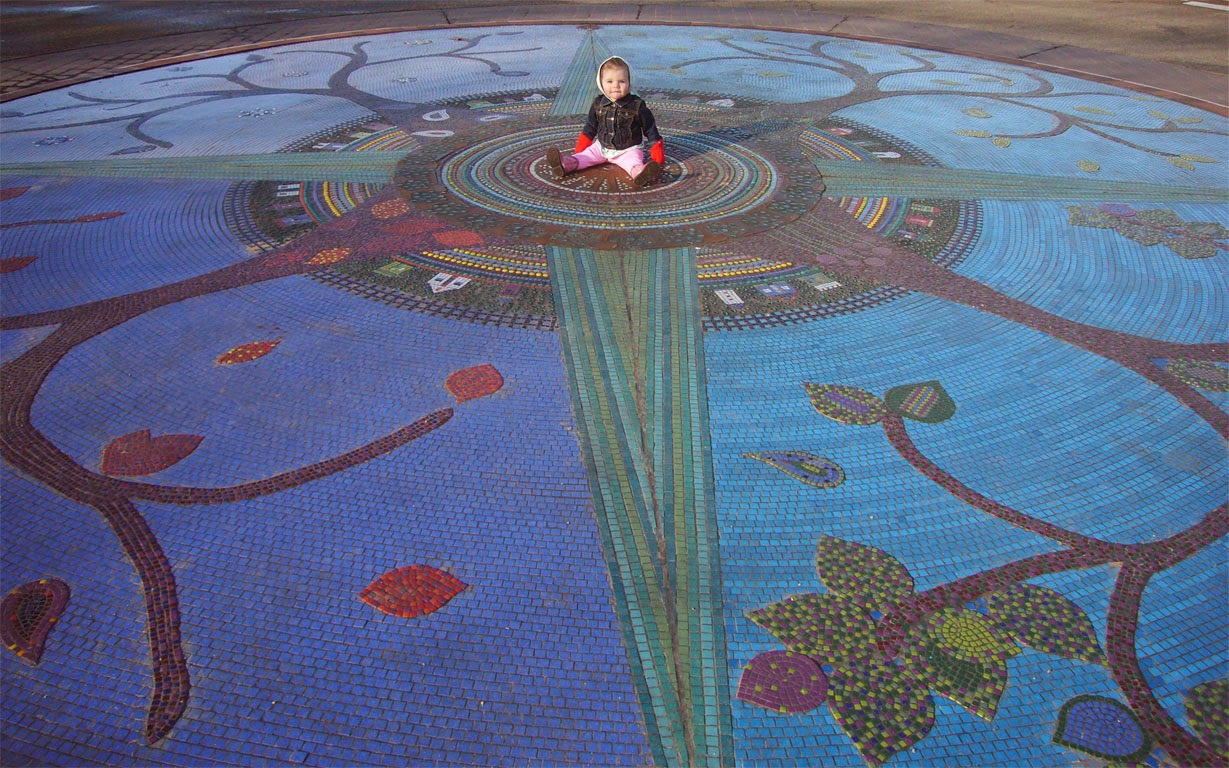 ACHD (which builds and maintains roads in these parts) is proposing new bike lanes on several major downtown roads, at the expense of motor vehicle lanes.  They are asking the general public to weigh in.

I wasn't able to attend their Open House, but I submitted the following comments via email:

I'm a 29-year veteran transportation cyclist here in Boise... bicycle has been my primary year-round mode of local transportation since 1986.  And I've worked downtown, and bike-commuted via downtown streets, for the last 19+ years.  So, I've got a little experience.

On the one (personal/selfish) hand, I'm rarely uncomfortable using the existing infrastructure.  There are several north-south streets with bike lanes, as well as Bannock and Grove.  I can navigate pretty close to 'most any destination without too much sharing-of-lanes-with-cars.  And, I share lanes with cars enough that I'm not uncomfortable with that, either, at 20mph speeds in particular.

On the other hand, it's a FACT that a lot of people would ride bikes more, as transportation, if it weren't for the "fear factor."  Safe or not, sharing a lane with cars is PERCEIVED as being unsafe by people who don't do it regularly.  And more people on bikes is good for the community!  If 50 more people are riding bikes downtown, probably at least 30 cars are NOT on the roads that day!  They're saving money that they can spend at downtown merchants.  They are NOT spewing pollution into our inverted atmosphere.  And the city "happiness quotient" goes up!  THAT has to be worth something, huh?

I know I'd be much more inclined to bring my 7-year-old granddaughter downtown on the bikes, if I was confident we could use bike lanes for the duration.

So, in balance I suppose I'm in favor of more bike lanes downtown, and believe it would be the right thing to do.

As more and more people straddle bikes, I sure wish there were some organized educational effort.  Mostly it's free-for-all.  I was dismayed this morning at the number of cyclists I saw riding nonchalantly along (downtown) roads, against traffic!  This is the time of year when the "amateurs" start dusting off their bikes after a long winter's nap, and showing up on the roads.  But unless they crash it's highly unlikely they'll be officially corrected in any way, and I've grown weary of trying to be the teacher.

Thanks for the opportunity to comment.
Posted by Bikeboy at 8:19 AM No comments:

This is why I need a bicycle with a belt, rather than a chain. [See previous commentary about the Novara Gotham bike.] Or a "bike butler."

My shifting has been deteriorating recently, and occasionally the chain has been jumping cogs.  It had been a month or maybe six weeks since I last cleaned the drivetrain.  (I should do it every 2 weeks; the reality is more like every 2 months.)  So I figured it was probably just gunked up; I lubed it in the morning, thinking that would tide me over 'til the weekend when I could do a cleaning/lube.  Then in the afternoon I took a couple paper towels to wipe off the excess lube.  If I had a bike butler, I'd expect him/her to have significantly higher standards.

Lo and behold, as I was wiping the chain with the towels, I encountered an obstruction - the chain was actually pretty much broken!

As far as I know, this is a first.  But it makes me a bit uneasy.  How many times have I ridden up my hill in the afternoon with a faltering chain?  How many "rabbit starts" have I done to beat the approaching traffic?!!  I'm glad I discovered the problem under such favorable circumstances.  And I'll try to make a practice of at least a quick check a little more frequently, going forward.

If I had Jay Leno -type dinero, I'd enjoy the warehouse full of classic cars and motorcycles.  And I'd add on a 1000-square-foot wing for bicycles.

Last week, a guy at the office rode in on his shiny-new custom-spec'ed CETMA cargo bike.  I tried not to drool on it as I checked it out.  I like the flat cargo deck, that can have various boxes, etc., added... very utilitarian!  Other features that he's included (he may not have Jay Leno dinero, but obviously money isn't a major stumbling block):
- internally-geared hub (10 speed Shimano, I believe)
- disc brakes
- Brooks saddle (classy!)
- a front hub motorized assist.  I was talking to him about it; he said when he gets it fully loaded he anticipates it will be pretty nice to have a little power backup.  In the third photo, you'll see a little control panel.  He said the battery is already onboard; it must be mounted underneath the deck. 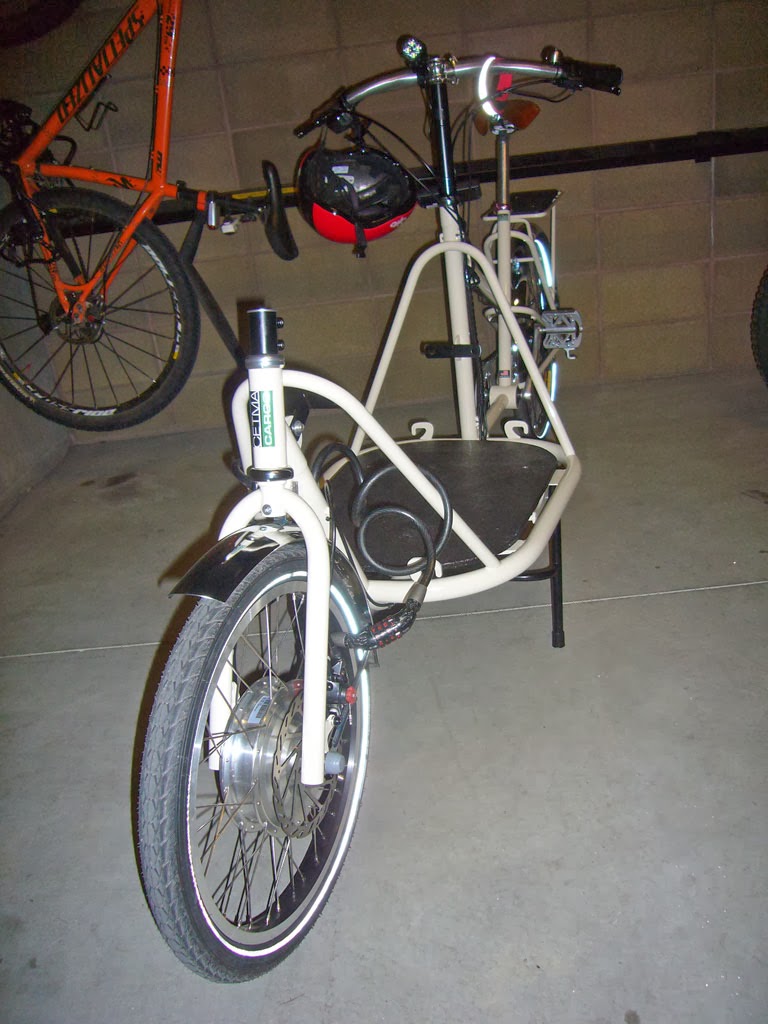 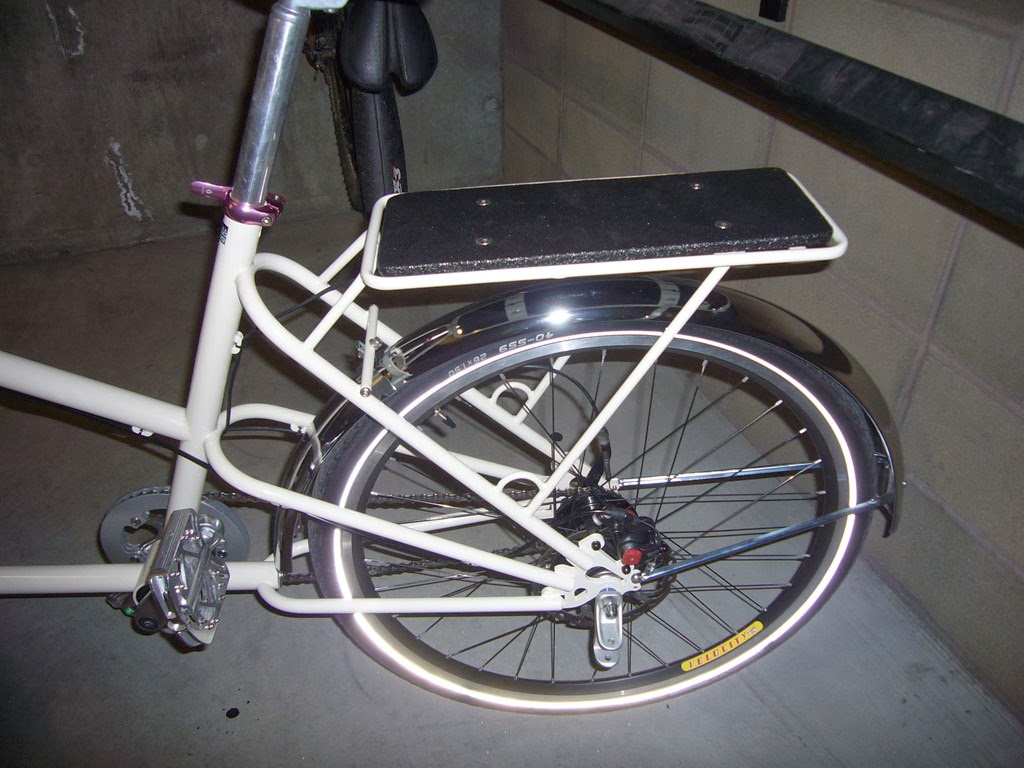 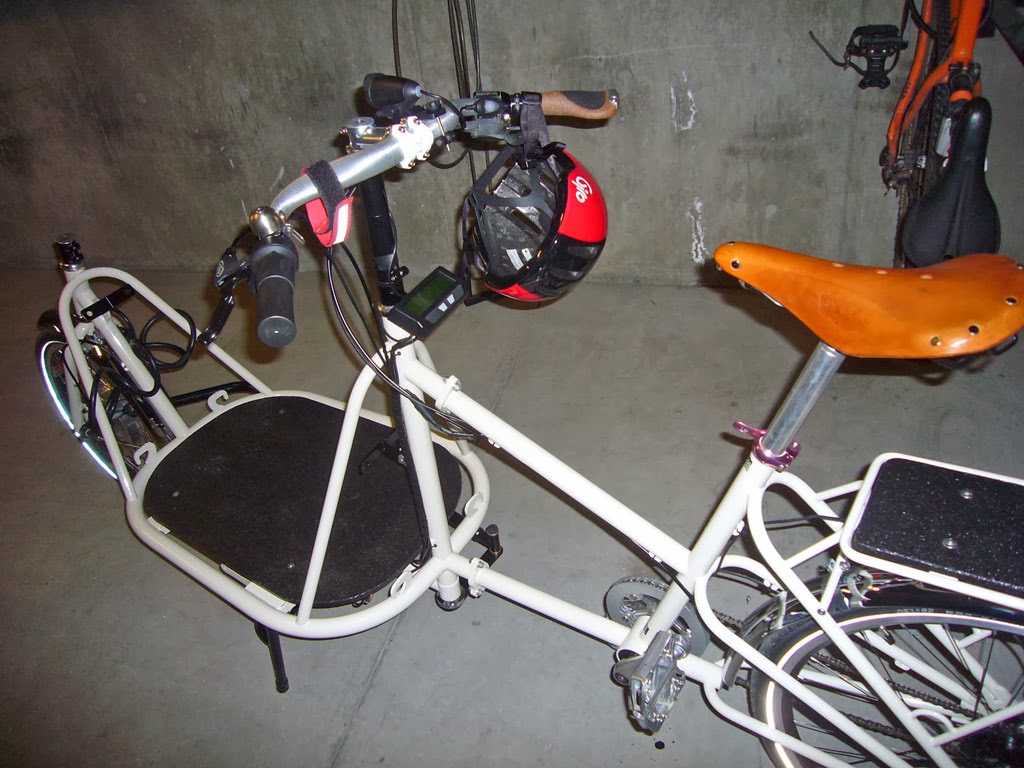 Then today, before it started to rain, I actually went on a new bike test ride!

For a couple years, I've had my eye on the REI Novara Gotham "urban" bicycle.  What particularly attracts me is the NuVinci constantly-variable hub.  That and the belt drive.  In my imagination, the combination would be uniquely quiet and maintenance-free, besides providing a super-wide final drive ratio.

To test ride it (OK since it wasn't raining at the moment) I signed a disclaimer, left behind my driver's license and REI credit card, and promised not to leave the parking lot.  I'd kinda dreamed of riding it uphill, and along a straight stretch for awhile, but I made do.  I did have the opportunity to test its maneuverability, since they're right next door to the Golden Corral... I deftly maneuvered around bovine GC breakfast customers who lumbered about in the parking lot.  And the hub is just as amazing as I imagined - a gentle twist changes the ratio in a very real way, but almost imperceptibly... no click between gears.  Very, very cool. 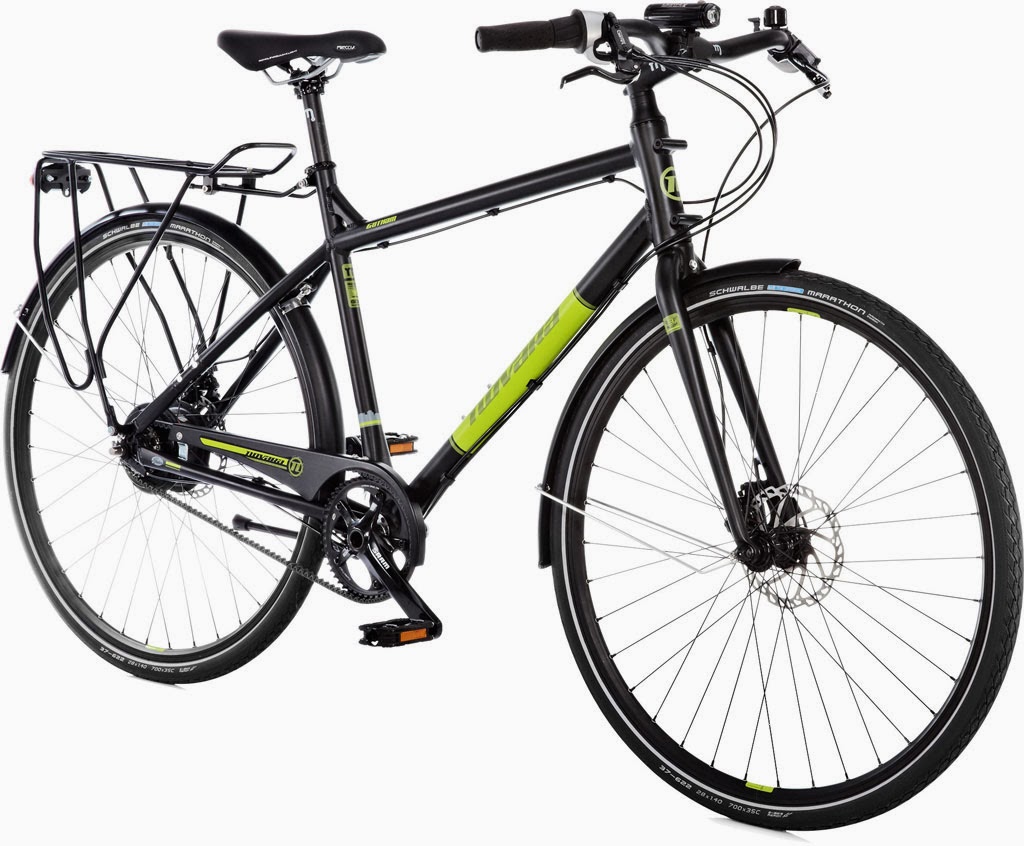 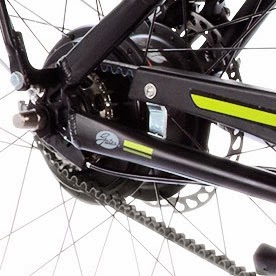 I'd dearly love to get it, but it'll probably have to wait for another year
.  Hopefully they'll still build it in '15.
Posted by Bikeboy at 1:45 PM 2 comments: