Jingle in my pocket!

I probably pay more attention to the morning weather report than lots of people do... during the winter months, my safety can be impacted by the weather in a significant way.

Take this morning, for example.  They were saying there was an overnight dusting of snow.  The temperature was in the mid-20s.  And... I remember arriving home last night on a damp roadway.  All of that could add up to treacherously slippery conditions.

As a result - I put bus fare in my pocket as I was making my preparations.  On a dangerous day, I'll often bite the bullet and limp to the bus stop, rather than riding all the way to the office.  But... as I pulled out of the driveway the roads didn't seem dangerously slippery, so I decided to take my chances.  I rode slowly and deliberately... all the way to the office, without mishap.  And the bus fare is still pocketed.  I can use that money for something else... or possibly the next early-morning bus fare.

This is a lesson I learned at an early age.  When I was in fifth grade, Mom would give me lunch money... I believe it was 35 cents back then.  BUT - I signed up to be a lunchroom helper.  Instead of heading for the playground for 15 minutes, I would stay after lunch and make sure the trash was properly deposited and wipe down the tables with warm, soapy water.  For services rendered, I got a free lunch.  The 35 cents stayed in my pocket - at least until after school where it often got surrendered at the Roosevelt Market candy counter.

What if every commuter put his/her commute money in pocket or purse in the morning, and could keep that money pocketed by choosing an alternative form of transportation?  Would such an immediate and obvious reward result in changed behavior?

For most people, their transportation expense - in the form of owning, operating and maintaining that single-occupant motorized vehicle - isn't so obvious.  Instead of making a $15 car payment every day, you pay the entire amount once a month.  Instead of that $1 or $2 insurance expense, you pay every six months.  Gas?  Fill 'er up - every week or two.  Registration?  Just once a year... it's easy to lose track of that transportation expense.  It's all very incremental, and makes it easy to overlook the fact that maybe 20 or 25 percent of your income is going to getting you to your job.

On the other hand... the thousands and thousands of dollars I've saved by riding a bike for 33 years have been absorbed by the family budget mostly, over those years.  But if I'd saved them out in a special account, it would've have accumulated quite a healthy sum.
Posted by Bikeboy at 8:12 AM No comments: 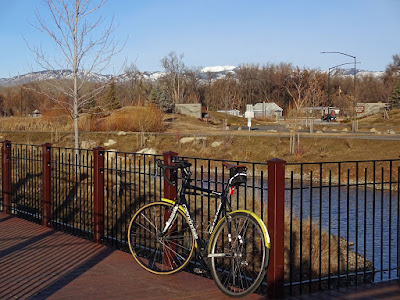 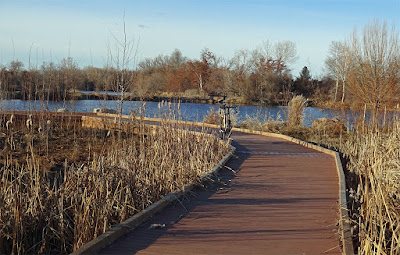 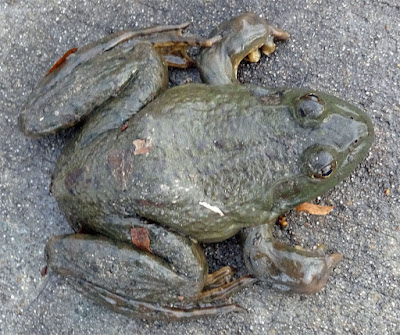 I love my commute!!

Mine is about 3.5 miles each way. It involves a bit of downhill in the morning, and a bit of "payback" uphill in the afternoon. It takes about 15 minutes - by bicycle (of course). In any given year, there are a few wet days, a few cold days, and a few hot days... but the compromise in comfort is more than offset by the $ savings, emotional well-being, and FUN! (It's a rare day indeed, when my commute time isn't some of the best time of the day.)

I especially appreciate my commute, when forced to consider the alternatives.

A couple mornings ago I was listening to Public Radio while thinking about getting out of bed. They had a story about "Super Commuters" (transcript HERE).  "Super commuters are people who spend more than 90 minutes traveling to work every day. It's a rough way to live, but more and more people are doing it."

A woman named Jodie Collins works in San Francisco (as a makeup/hair stylist and Lyft driver). She lives in Sacramento... 90 miles away. If everything lines up perfectly, the commute takes her 1.5 hours. Often it takes 3 hours... because how often is urban interstate travel "perfect"? She rises at 4:45am ... and arrives back home at 2am the next day.

Oh my goodness! How much money would I have to earn, to put myself through such a regimen?!!

Closer to home... Jayson Hicks and his wife used to live in Seattle, but traffic was so bad, and housing so expensive, that they moved to Idaho. Twice a week, they drive 100 miles to Boise (so... maybe from McCall?), and fly to Seattle for work.

Sean Wright has what would see "on paper" to be a more sensible commute. He lives in Riverside and works in Los Angeles. (That's like Meridian and Boise, no? Not quite...) Sean says, "The worst part is knowing how many hours I'm spending commuting - four hours a workday, 20 hours a week, 80 hours a month all spent commuting."

I'm so fortunate! The farthest distance I've ever dealt with, from home to workplace, is probably five miles. I listen to the morning traffic reports and am convinced I wouldn't even be able to handle a drive in from Meridian or Eagle. Way too much that can go wrong, and I don't have enough faith in my fellow commuters. I'll stick with my 15-minute bike commute, where the worst-case scenario is less-than-ideal climatic conditions (and if treacherously slippery, surrendering and taking the bus instead).
Posted by Bikeboy at 12:57 PM No comments:

Check out these custom-built gates, that incorporate vintage bicycles as decorative features.

They are at the home of my friends Abe and Laina and their family.  And, they were custom-built by their neighbor and my friend Joe.  Awesome!  I want some!

(The twisted-around handlebars are hard to look at... but they're for lookin' at, not for ridin'!) 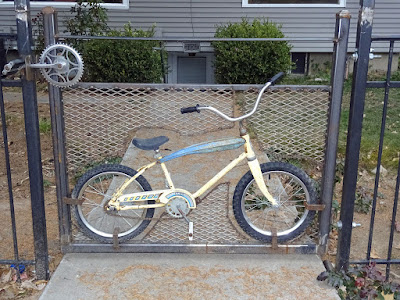 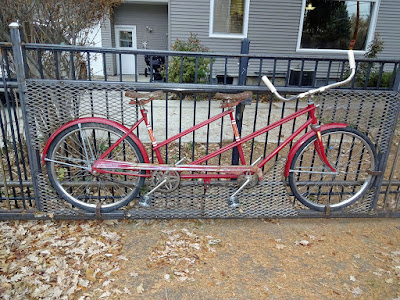 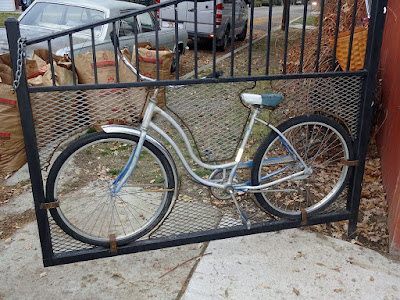 Posted by Bikeboy at 8:52 PM No comments: