Gosh! I must've gone to sleep under a rock! Last I heard, it was in the "study stage." I had no idea that it was ready to roll forward, but they intend to have it up and running sometime in the spring or summer of next year. It will be operated by Valley Regional Transit - the same people who run the city buses and the vanpool program.

The initial rollout will be 70 bikes at 7 strategically-located stations; those numbers will double as the program expands to envisioned capacity. Memberships - required to use the bikes for 30-minute intervals - will range from $5 for a daily pass to $75 for a year.

Does Boise have the population base to support such an endeavor? I guess we're going to find out. New York City's new "Citibike" has been wildly successful; similar bike-shares in other cities not quite so much, at least in participation and keeping the bikes rolling.

Most successful bike-sharing cities have large populations of apartment dwellers and other "urbanites" for whom owning and storing a bike can be much more complicated than for us suburban-types who have garages, etc. And large numbers of tourists, who would be the primary customers for the daily and weekly membership options.

For me, the main downside is the cost; estimated to be $650K for the rollout, or $4600 per bike. And if corporate sponsorships were paying for it, as in NYC, I'd have no bones to pick. But in Boise's case, the deep-pocket taxpayers will be picking up the tab for the startup. (According to the website, the money will come from "federal transportation alternatives dollars" and federal Surface Transportation Program.)

Um - we're broke! Just in case you haven't been paying attention, the government is poised to shut down for lack of funds. We (the citizens of the U.S.A.) are in debt almost $17 trillion! If we were flush with surplus funds, a bike share would probably be an awesome expenditure, but not when we're bankrupt. (I liken our debt ceiling to a family with a maxed-out credit card and barely able to make the minimum payment each month. So they call the bank and ask to have their credit limit raised $5000... it's approved, and to celebrate they buy new furniture! The problem has NOT been solved!)

On Labor Day, I went motorcycling with some friends; we did the Boise to Banks to Lowman to Boise loop.  And it put me to wanting to do part of the same ride on the bicycle.  My friend "Woody" told me several years ago that Banks-to-Lowman it was his favorite bike ride; I tried it a couple years ago and wrote about it HERE.

It was great to return... during a week of vacation, I took a day (Thursday 9/19) and did the same ride.  My wife is quite kind to loan me the Wagon Queen Family Truckster now and then, so I can stage such an adventure.

It started out almost cold, and breezy.  In fact, at the first stop I would've been riding immediately uphill and into a stiff headwind, so I drove up the road a couple more miles before getting underway.  It made a big difference.

The ride to Lowman was lovely in every way.  As I recalled from last time, there's not really much commerce in Lowman, so it can be a challenge to find water.  But there's a highway maintenance shed there; I approached it and found the door open.  Far as I can tell, nobody was there at the time, but there was tap water.  I drunk deeply and refilled my bottles.

The first half of the ride back was almost as lovely.  Then I started feeling the distance - when 90% of your riding is 20 miles or less, I'm sure it helps considerably on a 60-mile jaunt, but just the same, by the end I was feeling like a tired old man.  I was happy to see the Family Truckster come into view up ahead. Eagle - light at the end of the bike path?

There's a very encouraging story on the Idaho Statesman website... the Greenbelt on the south side of the river might be "officially" complete all the way to Eagle Road, before the weather turns cold.

"City officials have directed its parks director to get a 1-mile stretch of Greenbelt near the Laguna Pointe subdivision cleared of weeds and other obstructions so that it can be safely used by walkers and bicyclists. Work will begin Monday, and it's expected to be finished by the end of September."

Great news! And my hat is off to the city officials in Eagle. It was obvious that the Laguna Pointe folks were using the Riverside Village playbook, hoping to win the battle through attrition and discouragement. But apparently the town fathers recognize that they answer to all the citizens/voters, not just a few well-heeled elitists who yap the loudest.

I sing in the choir at church. (Well - I emit noise, anyway. It's not a choir that requires an audition, and my daughter is the director, so I'm in!)

And last Sunday, our excellent accompanist commented on the long stretch between the bass note and the tenor note... it was well over an octave, and she told us, "You tenors, I might have to sacrifice your note if I can't play both." A notorious smart-alek, Mark, piped up, "Can't you play one of the notes with your nose??"

I've been thinking about that.

Some of you old-timers might remember "suicide knobs" from the good old days. Back before power steering and automatic transmissions were widespread, a popular after-market accessory was a small rotating knob, which you could bolt to your car's steering wheel. It allowed easier one-handed steering, leaving the other hand free for alternate duties. They were sometimes called a "necker knob," or a "Brodie knob" after an actor/daredevil from yesteryear. 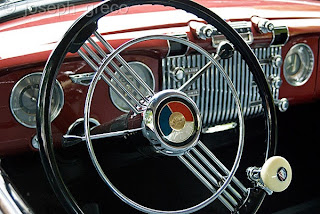 According to the Wikipedia, they were particularly popular among hot rodders on the West Coast, because they facilitated doing stunts, spinouts, etc.

My dad had one on his car - I remember it well, because it was beautiful two-tone white and translucent emerald green. And back in those days, kids could sit in the front seat.

They're still available - just do a web search for "suicide knob."

And to my way of thinking, they'd be more useful now than ever!

In fact - thinking back on choir practice, I'd suggest a modified design, with a cup shape and a soft, padded surface - perhaps Naugahyde, or fine Corinthian leather. My design would be particularly handy for folks with a manual transmission, or with a bench seat and your honey sitting close.

You could mount it at the twelve-o'clock position on your steering wheel.

Then, when you have your cell phone in your left hand, your coffee cradled between your knees (thus making it hard to steer with your legs), and need to operate the gearshift with your right hand (or have it wrapped around your babe), or you need both hands for your texting responsibilities, you could lean forward, inserting your nose in the suicide knob, and engage in rhinosteerage.

Why hasn't somebody thought of this before?!! It should be standard equipment on any car with a manual transmission, in these attention-deficit times. Frequently I see people who just have to trust the direction of their vehicle to luck, because they are out of appendages.
Posted by Bikeboy at 10:11 AM 1 comment: 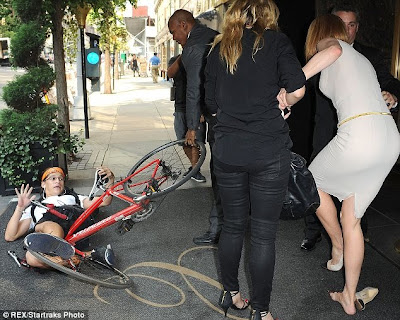 Lucky for the rider that he ran into the actress, rather than that sturdy-looking bodyguard dude. If it had happened in a back alley rather than a busy street with lots of witnesses, he might have ended up wearing that bicycle home wrapped around his neck, or eating it.
Posted by Bikeboy at 9:13 AM 1 comment: