A month ago, I was thrilled to report that the westbound Greenbelt was passable all the way to Eagle Road.  It was a little mushy in spots, but for the first time it was looking like a transportation corridor, rather than a recreational "out and back" pathway. 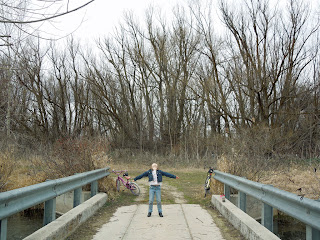 Alas, the situation has deteriorated.

Is this another case of the "haves" locking out the "have-nots," as is the case in the Riverside Village subdivision??

I've sent a letter to the Eagle "city fathers," reminding them that they were vocally on the side of the cyclists in the dispute regarding Riverside Village, and expressing my hope that they'll also eventually make sure the south-bank Greenbelt continues to their community. 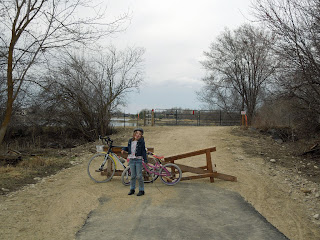 Here's part of that letter:


... a "bike path" that ends abruptly might be a nice recreational facility for people who have time to ride out to the end and then backtrack... but a bike path that leads to DESTINATIONS (like Eagle Road) also becomes useful as a transportation corridor.  And what a lovely (and safe) corridor the Greenbelt would be!  (NOTE: A graded dirt trail isn't as nice as a paved trail, but it's perfectly functional for 90% of bicycle traffic.  There were a couple "squishy" spots in February, but I got the impression it would be passable by most cyclists, once it dried up in a few more weeks.)

As a lifelong Boise resident, and a 27-plus year veteran transportation cyclist, I'm pretty sure I've heard implications that "the dream" is to eventually extend the Greenbelt all the way to Eagle Island, and perhaps even to points beyond!  But if passage on the Greenbelt is prohibited due to private property restrictions, such a dream will never be reality.

I hope you can give me and other cyclists (particularly those who live in Eagle) some reassurance that eventually the "Greenbelt" will also be a functional transportation corridor to your community.  You can rest assured I'll be much more inclined to visit - often with other family members who like treats/incentives at the destination! - when we can travel on the Greenbelt, rather than on State Street or some other route we are sharing with high-speed motor traffic.

She is a trooper riding there on a small 1 speed bike. Hopefully she will be able to enjoy some icecream at the end of the trail.

Clancy, the ride turned into a minor "ordeal" before we got back. Mack lamented about how tired her legs were, and finally near the race-horse corrals, I asked if she'd like to wait while I rode ahead and came back in the sag-wagon.

Fortunately, the car was only a couple miles distant - just beyond the VMP bridge. I was back in probably 10 minutes.

She ended up with 11 miles, which is pretty good for a 6-year-old kid early in the season. I was probably too ambitious; we'll scale it back a bit. (But she DID go riding with me again the next day.)