I was a reluctant participant in a parade this morning...

Due to external circumstances, it was my job to drive the granddaughter to school today.  It happens every school day... but most often it's her grandma behind the wheel of the float.

The granddaughter is 9 years old, responsible enough for her age, and has an uncanny sense of direction - better than most adults!  If the need arose, she could probably find her way to school blindfolded.

The school is about 3/4 mile away.  One somewhat-busy road to cross, but there's a nice crosswalk with warning lights that can be pedestrian-activated.  Totally-flat terrain - there's probably not 2 feet of elevation change from Point A to Point B... or anywhere in between.

It was indeed a parade.  There were a couple school buses - they get preferred parking near the front door.  The cars - most carrying one child and his/her book bag - queued up for a block-and-a-half.  For a guy who rarely runs a motorcar at all, it's pretty stressful to sit there, foot on the brake, engine idling, staring at the back end of another parade participant.

I've argued unsuccessfully that Mackie would benefit if she were allowed to walk, or bike, to school every now and then - at least on nice days.  (The neighbor girl goes with her - and the neighbor girl's dad picks them up and brings them home in the afternoon.  At least they've got a low-key car pool.)

Times have sure changed.  When I was an elementary-school child, the norm was to walk to school, or ride your bike, unless you lived a long distance.  But 50-odd years later, it's pretty much understood that kids will get smashed by inattentive or impaired motorists.  And the ones who don't get smashed will be abducted by predators in big black sedans.

I'm grateful for the people who are involved in the Safe Routes to School program.  Maybe at some point, Mackie will be trusted to make that perilous jaunt.  (There's another little girl down the street who's in first grade - she rides her bike on nice days, and so far she's somehow been able to survive the many perils.  I'm sure some folks regard her parents as being totally irresponsible!)
Posted by Bikeboy at 4:27 PM 2 comments:

More info about the Greenbelt (history and maintenance) in west Boise

I'm privileged to have a friendship with Gary Segers.  He is a cyclist and an advocate for our "crown jewel," the Greenbelt.  (He founded the group Citizens for an Open Greenbelt... and it was through his efforts in that group, trying to get the forbidden "Riverside Village Nature Path" reopened to cyclists, that I got acquainted with him.)

Gary saw my previous post, giving a thumbs-up to Boise City and ACHD for their efforts to do winter maintenance on the Greenbelt, and a thumbs-down to Garden City for their lack of effort.  He gave me some good info, including clarifying a misunderstanding I've always had about the island the Greenbelt crosses, near the Fairgrounds horse track.  I hope you find this interesting; I did.

"I believe one of the sections you are referring to is what is called 'Plantation Island.'  Most people don't know that the island is owned by the​ ​Idaho Foundation for Parks and Lands (IFPL). ​ They were one of the early advocacy groups for Greenbelt development in Boise.  Years ago the Foundation (a forerunner the Boise River Trail Foundation and now the Foundation for Ada Canyon Trails System (FACTS)) recognized that there was no way to travel west on the Greenbelt from Boise city limits on the north side of the river because of the Plantation golf course and housing development.

"During the COG efforts several years ago I found out that the Plantation Golf Course and development managed to get approval from Garden City that blocked any pathway along that section on the north side of the river to Glenwood. So the IFPL figured the only way to make sure that future development of the Greenbelt going west had to be on the south side of the river.  And the only way to make that happen was to buy the island from the State and construct  a pathway and two bridges so that the pathway would continue on the south side of the river along the Ada County Fairgrounds.

"One of the board members of IFPL advised me by email awhile back that ​the IFPL facilitated 'the building and setting of the two bridges and the pathway by the Boise River Trail Foundation, forerunner of F.A.C.T.S.​' She went to say the 'bridges have been repaired with the assistance of Troop No. 94 on various Eagle Scout projects.  Much volunteer labor has been involved and the Foundation has paid for the materials.  Both Ada County and Garden City have helped with a generator and other equipment at times.​' The Foundation does not have the money or resources to improve the pathway in that section or keep it maintained.  They have been trying to negotiate an agreement with Ada County to do the maintenance but the discussions have not resulted in any agreement to date.

"And just for reference,  the section beginning once you come off the island and head west (along the fairgrounds and stables), is owned and maintained by Ada County (not ACHD).  Garden City's section of the greenbelt begins west of Glenwood and goes on for a couple of miles to the Ada County section.

"And here is a another bit of useful info.  The Greenbelt west of the Garden City limits (south side of river) to the Eagle City limits is owned by the Foundation for Ada/Canyon Trail Systems (FACTS) of which I am a board member.  Since FACTS has no money to maintain that  roughly 3 mile section we are in the process of deeding that land to Ada County.  It has been a very difficult project but well worth the effort since this creates lots of opportunities for continuing the Boise River Greenbelt west to Eagle and beyond."

It's easy to ride nonchalantly along the Greenbelt, oblivious to the effort required to keep it in prime operating condition... except to gripe when that effort falls short.  IT IS NOT BY ACCIDENT THAT WE HAVE OUR GREENBELT!  I'm grateful for people like Gary, who make the effort, often in a purely volunteer capacity, to provide cycling/walking residents and visitors with a world-class facility.

I dream of the day when it continues on to Eagle Island State Park, Star, Middleton... maybe even Caldwell.

(I stand by my original contention that Boise goes out of its way to accommodate cyclists, while Garden City has no problem with discouraging cyclists, which are seen as a nuisance.)
Posted by Bikeboy at 9:31 PM No comments:

We had a global warming event today - the temperature in Boise got above freezing, for the first time in a couple weeks.  (It's amazing how nice 37 degrees feels, after 10 days of teen-and-lower temperatures!)  Because it felt pretty nice, I decided I'd take a scenic loop on the way home.  (The days are getting longer, too!)

I'm happy to report that - as is usually the case - the stretches of Greenbelt maintained by Boise or the ACHD were in excellent shape, even dry in most places.  There are spots in the shade, over bridges, etc., where it's a little dicey, so it pays to be vigilant.  But I made it downstream on the Boise (north) side with essentially no anxiety.

Lo and behold - I got to the bridge where you cross the river into Garden City, and it was the end of the line, at least for my brittle old bones and skinny tires.

These photos were taken maybe 50 feet and 1 minute apart... 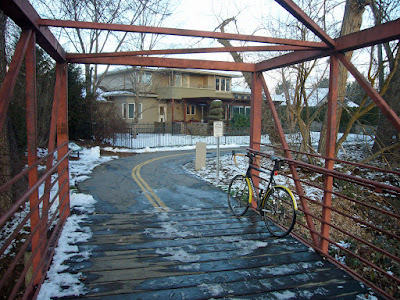 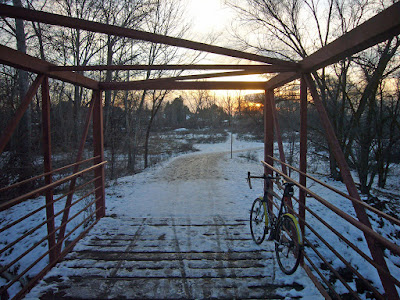 Besides being to Boise what Shelbyville is to Springfield, Garden City has a colorful history of opposing bicycles at every opportunity.  They just don't get it.  They probably spend more money on "No Bicycles" signs, than they do on Greenbelt maintenance.  I s'pose it was understandable when their commerce consisted mostly of RV lots, used car lots, porno stores and tattoo parlors.  But nowadays they are quite proud of their new craft beer outlets and such... I'm thinking the clientele of some of those newer businesses probably ride bicycles now and then.  They might choose Boise beer outlets and tattoo parlors if they perceive bike-unfriendliness in Garden City.

My hat is off to the good folks at the Boise Parks Department (who I assume do most of the Boise pathway maintenance).  Not so much to our Garden City "neighbors."  I expect that Boise and Garden City residents alike are appreciating the dry Boise pathways.  It's nice not to have to share space with cars, when the space is also compromised by snowbanks, icy patches, frozen slush, etc.
Posted by Bikeboy at 7:23 PM 1 comment: