My afternoon commute today.  Fifty yards to the west, the motorists zoom-zoomed down the "connector," enjoying the new 60mph speed limit.  I wouldn't trade 'em. Here's the bike for people who absolutely need to make a fashion statement with their bicycle... but find the "hipster single speed" too pedestrian... the Gucci bicycle.  And since they're priced at $14,000, you can rest with some assurance that you won't have that extremely awkward situation of arriving at a trendy destination on your Gucci, only to find that somebody else is riding the same model. 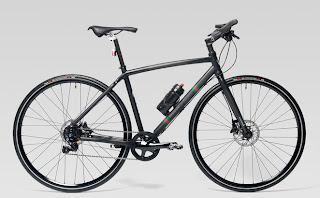 It's built by Bianchi, but with Gucci embellishments, including the Gucci logo stitched on the saddle.  If you want to go with the full Gucci Kit... the water bottle will set you back $105, and a matching helmet can be had for $890.  (Good grief!!)  You could get some Gucci loafers separately, to complete the look.

In my admittedly non-expert opinion, it looks like a $600 bicycle, so you're paying a premium for the brand name.  (It's probably built in Taiwan!) 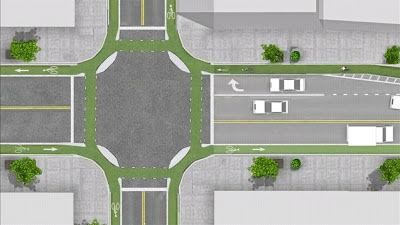 Traffic engineers on this side of the pond could definitely take a cue from those innovative windmill people who wear the wooden shoes and grow tulips!
(-;
Posted by Bikeboy at 2:14 PM 3 comments:

Infographic: The Cost of Traffic Jams

Nationwide Insurance says traffic jams cost the average motorist $716 per year.  According to their interesting chart, the worst city is Washington, DC, where people spend 72 hours per year sitting in traffic jams.  Frankly, that seems low to me... as somebody who occasionally sits in big-city traffic, I'd think the accumulation would be more than 10 or 15 minutes per day.

I'd say cyclists are pretty much immune from all of those but bad weather.  And I've been slowed by bad weather on my bike, but never "traffic jammed."
Posted by Bikeboy at 2:49 PM 1 comment:

Ethical question for the driver test

Tell me what you think of this.

In Idaho, once you have a driver's license, unless you lose it you just go in and pay the fee... they check your eyesight... and away you go with your new license.

Frankly, I believe that at least a written test should be part of the renewal process... just to make sure you're still on top of the rules of the road.  Some rules - like stopping at a red light or following posted speed limits - are obvious.  But others, not so much.

Furthermore, after significant consideration, I'd like to see all motorists have this hypothetical question posed to them:

If you were to cause a traffic collision that produces a fatality... would you rather that the victim be you, or somebody else?

Maybe if they had to give that some consideration, they'd be ever-so-slightly less inclined to drive while intoxicated, or while yappin' on the phone, or to blow through that red light.  Or, maybe not.
Posted by Bikeboy at 8:13 PM 2 comments:

Often when I'm discussing bicycles-as-transportation with somebody, they say, "Well, sure!  You can do it - it's just you!  I've got to drop off a kid at daycare, get groceries, run errands..."  The list of excuses goes on and on.

While I acknowledge that each person has his own set of circumstances, and some would have a harder time than others, I'm convinced that what you want to do, you can do. 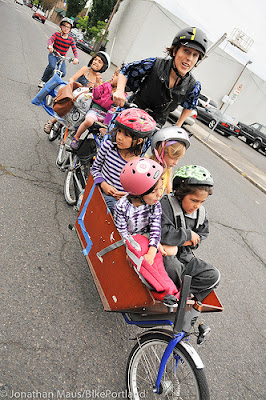 Take Emily Finch, for example.  She had five kids and was expecting another... and like most moms-of-five, transported her kids in a big SUV, or in a "stroller built for three."  But she wasn't happy with the situation.  One day she did a web search for "family bike," and her life changed forever, and for the better.  She ordered a Dutch-made Bakfiets... she puts 4 kids in the cargo hold in front, one kid in a seat behind hers, and another on a tag-along out back.  (Nathan, the oldest at 11, rides his own independent bike now.)

Emily is a small woman, but between her and a "stoker" on the tag-along, she transports 550 pounds in style!

Their limit is 20 miles, and occasionally she has to use bungee cords to strap an unruly brat into place.  (What parent can't identify with that?!!?)  But they are totally committed.

Do the kids want to chicken out and take the car?  (The family has a car, but only husband Mitch ever drives it.)  "They've lost that sense of driving... my kids have forgotten what it's like to even be in a car."

Thanks to Clancy for sending me the link to this AWESOME story!
Posted by Bikeboy at 8:04 PM 2 comments: